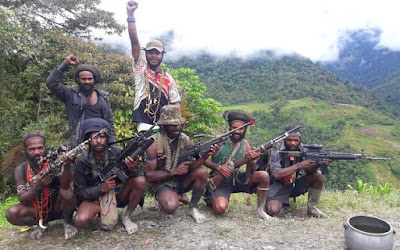 West Papua Liberation Army unit, led by Egianus Kogoya. Derakma, Nduga regency. Photo: Supplied
It's the latest violence in troubled Nduga regency, where a war has killed dozens on both sides since December.
Indonesia's military says a helicopter was unloading 10 soldiers and supplies at a compound in Nduga when rebels sprang an ambush.
A military spokesperson, Colonel Mohammad Aidi, said two soldiers suffered gunshot wounds in the hit-and-run attack on Wednesday morning .
He said they were in a stable condition at nearby Timika General Hospital.
Claiming responsibility for the attack, the West Papua Liberation Army said it killed three soldiers and injured three others.
The rebel group, which is frequently at odds with the military over incident reports, claimed to have killed another two soldiers on Tuesday in a separate attack in Nduga.
Colonel Aidi said the military forces tried to retaliate during Wednesday's attack but that the rebels had attacked suddenly before disappearing into a forest.
--------------------------------
http://www.solomonstarnews.com
2) Sogavare on West Papua
25 April 2019  Author  Editor
NEWLY elected Prime Minister Manasseh Sogavare, once a staunch advocator for West Papua independence says he’ll be taking friendlier approach to the issue.
He was responding to a question on his government’s foreign policy on West Papua during his first press conference on Wednesday.This was just after he received a call from the Indonesia’s Embassy in Port Moresby congratulating him on his victory.Sogavare told reporters that his government will actively engage more with Indonesia on the issues surrounding human rights violation in West Papua.“The Indonesia’s Embassy in Port Moresby just called me and said they are looking forward for a friendly dialogue and consultations on the issues of West Papua as friendly neighbours,” Sogavare said.He clarified that at the early stage the stand that he took as the prime minister and also as the Chair of the Melanesia Spearhead Group (MSG) was because it was the position MSG took all along.“Well nothing stops individual Melanesian States to have their own foreign policy on West Papua issues but it will be really nice if we take it as a collective body to fighting against human rights violation,” Sogavare said.But he added that it is a sad story when 600,000 Melanesians died, all because their rights were suppressed. He further added that as a coalition government he will certainly discuss this issue with their partners and come up with a friendly way to address the issues of our Melanesian brothers in West Papua.By ANDREW FANASIA
————————————————
https://www.thejakartapost.com
3) Women of Teluk Bintuni and their mangroves
Thu, April 25, 2019   /   08:39 am
Jerry Adiguna
slideshow
Teluk Bintuni regency in West Papua has a mangrove forest covering more than 200,000 hectares with a high degree of biodiversity. This portrait series showcases how women in Teluk Bintuni and nature are living side by side in harmony. Apart from taking care of their families, the women are also engaged in various group activities to safeguard their natural environment and promote the local community’s conservation- and customs-oriented economy.
The biodiversity in Teluk Bintuni is among the best in the world, after Raja Ampat in the same province, constituting 10 percent of Indonesia’s mangrove forests.
In the 1980s, the World Wide Fund for Nature (WWF) proposed that the regency’s mangrove forest be made a nature reserve, which was followed up by the Conservation International (CI) and later by the regency administration.
When it was converted into a nature reserve Teluk Bintuni became a national strategic zone, like Raja Ampat.
One of the local government’s priorities involves improving conservation-based development programs because of the mangrove’s important role in carbon trading.
Empowering the community to support conservation programs has also become an important strategy, along with other efforts, such as the organization of the World Mangrove Festival in November.
— The Jakarta Post was invited by Econusa Foundation and NGO Panah Papua to visit Bintuni Bay, West Papua.
-------------
Posted by AWPA Sydney News at 12:47 AM