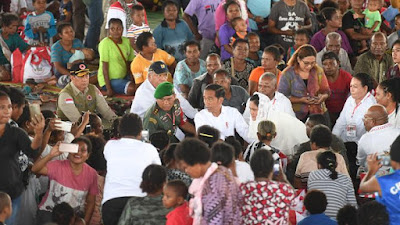 Translator: Dewi Elvia Muthiariny   Editor: Markus Wisnu Murti 1 April 2019 17:18 WIB
TEMPO.CO, Jakarta - President Joko “Jokowi” Widodo visited victims of floods in Jayapura, Papua province who were sheltered at the Toware Sports Center, Waibu district, today, April 1.
“Yes, relocation is necessary because the area is prone to disaster. So people must be relocated,” said President Jokowi after having a dialogue with the evacuees on Monday, April 1.
Earlier, flash floods hit Jayapura regency, killing 104 people. A total of 160 people were injured and 9,691 others were displaced from their homes to 18 locations.
Accompanied by First Lady Iriana and Papua Governor Lukas Enembe, Jokowi sat among evacuees for a discussion concerning the disaster aftermath.
According to Jokowi, the relocation site would be determined by the Papua administration. “After we set and acquire the land, we will start the house construction,” he added.
President Jokowi and his entourage also inspected affected areas in Kemiri, Hinekombe district, where streets, buildings, and school buildings were buried in mud due to the flash floods and landslides.
ANTARA
——————————————————— 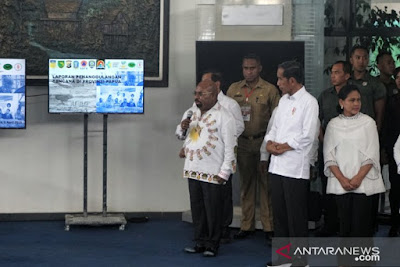 Distrik Sentani, Papua, (ANTARA) - President Joko Widodo (Jokowi) reached Jayapura District, Papua Province, Monday, at 1:15 p.m. local time, to re-evaluate measures taken in response to the flash flood that caused havoc in Sentani Sub-district and the adjoining areas.
After arriving at the Sentani airport, Jokowi, in the company of Cabinet Secretary Pramono Anung, was received by Papua Governor Lukas Enembe, Commander of the Regional Military Command XVII/Cenderawsih Major General Yosua Pandit Sembiring, Chief of the Papua Provincial Police Inspector General Martuani Sormin, Agrarian and Spatial Minister Sofyan Djalil, and National Disaster Mitigation Agency (BNPB) Head Doni Monardo.The head of state was updated on the situation in Sentani after the flash flooding and bore witness to the inking of agreements on rehabilitating the Cyclops mountainous area and restoring the river basin areas.The Agrarian and Spatial Ministry, Ministry of Environmental Affairs and Forestry, Ministry of Public Works and Public Housing, National Development Planning Agency (Bappenas), Jayapura District and Municipality, Kerom District, Cendrawasih University, BNPB, Sentani Adat Council, and PT Freeport Indonesia were part of the agreements.Jokowi and First Lady Iriana later paid a visit to the flood-affected victims, who had sought shelter in the Toware sports stadium.The flash flooding that hit on March 16, 2019, impacted Sentani and affected the nearby areas, including the sub-districts of Waibu, West Sentani, Ravendirta, and Depapre.A total of 112 people lost their lives, 2,287 homes incurred damages, and material losses amounting to Rp506 billion were incurred as a result of the flash flood.

---------------------
https://en.tempo.co
3) Komnas HAM Laments Absence of Papua Issues in Election Debate
1 April 2019
Translator: Dewi Elvia Muthiariny   Editor: Markus Wisnu Murti
TEMPO.CO, Jakarta - A commissioner at the National Commission on Human Rights (Komnas HAM), Amiruddin Al Rahab, lamented issues on security and governance in Papua were not discussed during the fourth presidential debate on Saturday, March 30.
Amiruddin deemed that the issues had direct relations to the debate’s theme, which addressed ideology, governance, security, defense as well as international relations.
"If we look at the law, issues in Papua should be discussed during Saturday’s debate because they were related to diplomacy, defense, security as well as governance," said Amiruddin at a press conference at the Komnas HAM office in Jakarta, Monday, April 1.
He added that the absence of the issues in each presidential debate made the public unaware of what steps the candidates would take in dealing with problems in the country’s easternmost province. While in fact, issues concerning security and governance in the region have yet to be resolved by the government to date.
Read: Jokowi Visits Flood Victims in Jayapura, Papua
"Will there be just like this as usual or something new later. We hope for a better condition of Papua,” he underlined.
Tempo Magazine in its latest edition published Monday, April 1, 2019, reported that military operations in Nduga, Papua are still afoot. The Indonesian Armed Forces (TNI) is still guarding a number of access points to the regency. In addition, thousands of Nduga people displaced by the conflict are still at refugee camps in Wamena.
According to Amiruddin, the presidential candidates must elaborate their plans on how to seriously cope with the possible impact of the conflict in Papua. "Such as how to face armed groups and what strategic plans will be made. We don't know what they are. So perhaps, that's the [future president’s] homework," he concluded.
IQBAL TAWAKAL LAZUARDI (CONTRIBUTOR)

Jakarta (ANTARA) - President Joko Widodo (Jokowi) and First Lady Iriana visited and spoke with the flood-affected victims seeking refuge at the Toware sports stadium in Waibu Sub-district, Jayapura District, Papua Province, on Monday.Jokowi informed the evacuees that the Papua administration will take a decision on an area to relocate the flood victims."On completion of the land acquisition process and after a decision is made, we will start with the work of building houses," Jokowi affirmed.The head of state highlighted the need for certainty of the area for relocation to ensure immediate construction of the houses.After having met with the displaced people, Jokowi paid a visit to Kemiri Village in Hinekombe Sub-district wrecked by flooding and landslide. On March 16, 2019, major flooding hit Sentani and several other sub-districts in Jayapura District, claiming at least 112 lives and rendering 94 others missing.The natural disasters caused serious injuries to 107 people and minor injuries to 808 others.A total of 374 homes, four bridges, five places of worship, eight school buildings, 104 home-cum-shops, and a traditional market incurred damage. Furthermore, the total number of people displaced by the natural disasters reached 11,556.The Papua provincial government has declared an emergency response period between March 16 and March 29, 2019.The government has deployed a joint team comprising military and police personnel, among others, to conduct search and rescue operations for the victims of the floods in Jayapura. Tens of non-governmental organizations also volunteered in assisting with the rescue operations.

5) Jokowi urges Papuans to remain optimistic over 2020 National Games
2 hours ago
Jayapura, Papua (ANTARA) - President Joko Widodo urged the people of Papua Province to remain optimistic that the 2020 National Games (PON) would be held as scheduled, despite the recent flash floods that affected certain parts of the Jayapura District area."The construction of sports halls will be completed in May, while the aquatic venue and sports complex will also see the light of day by the end of 2019," the incumbent president, commonly known as Jokowi, said here on Monday.On the sidelines of his visit to Jayapura city, where he was accompanied by First Lady Iriana, Jokowi addressed journalists. After having inspected the stadium, Jokowi confirmed that its construction process would be carried out as scheduled. Jokowi and Irina also visited the Toware Sports Hall, which is currently accommodating around 500 people displaced by the recent flash floods.The flash floods that recently submerged the Sentani area killed 104 people, destroyed 350 houses, three bridges, eight drainage systems and four sections of roads.According to the National Disaster Mitigation Agency (BNPB), 97 bodies were found in Jayapura District, while seven others were discovered in Jayapura City.The catastrophe that occurred after heavy rain hit the Jayapura District area on March 16 also forced 8,773 people to evacuate to higher ground and they were sheltered in 18 different camps.Related news: Jokowi visits Sentani flood victims at Toware StadiumRelated news: Jokowi visits Jayapura to oversee flood-control measures in Sentani