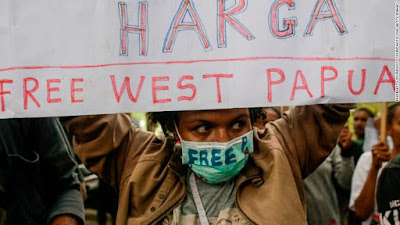 A West Papuan activist holds a banner demanding independence.
(CNN)As Indonesia's presidential candidates draw massive crowds to rallies across the country, leaders in the resource-rich but restive twin provinces of Papua and West Papua have called for an election boycott and their own vote to secede from the Southeast Asian archipelago-nation.
Neither incumbent President Joko "Jokowi" Widodo, nor his main electoral rival Prabowo Subianto have addressed the surge in violence in the provinces collectively known by pro-independence campaigners as West Papua.
During presidential debates in which the pair have sparred on human rights and national security, the issue has not warranted a single mention. But on the western side of New Guinea island, in Indonesia's far east, a decades old insurgency has flared with violence.
Last December, militants from the Papuan Liberation Army admitted to attacking and killing up to 31 people working on the Trans-Papua Road Project, a highway that will bisect the resource-rich province.
Joko had touted the project as a key part of his presidency's focus infrastructure, a 4,300-kilometer-long investment open up access to vast gold and copper deposits and highland villages.
Hundreds of troops moved in to the already militarized Nduga region to try to capture rebels. The counter insurgency measures resulted in 32,000 displaced residents, according to the highest estimates made by rights group Frontline Defenders -- who plan to submit their findings to Indonesia's Human Rights Council.
The Indonesian army has disputed the claim, saying that reports of destruction to villages are a "hoax."
"In the early weeks after the killings -- security forces had established a monopoly on the channels of information," said Richard Chauvel, an Indonesia expert at the University of Melbourne. But despite Indonesia's apparent military lockdown.-- with no foreign journalists and few rights groups granted access to Papua -- unconfirmed reports of violence have continued to leak out.
The United Nations is currently in negotiation with the Indonesian government to send a Human Rights Council Delegation to West Papua, though no date has yet been set.
CNN has reached out to the Indonesian government and Indonesia's Permanent Mission to the UN for further comment

A vote of their own

Indonesia has shared the mountainous island with neighbor Papua New Guinea since 1969, when just over 1,000 people from the local Melanesian population were handpicked to vote in "Act of Free Choice," a vote critics say was anything but free.
The disputed referendum, which was noted in a 1969 UN resolution, confirmed Indonesia's takeover of Papua and West Papua from the territory's colonial rulers, the Netherlands.
A continuous low-level insurgency has plagued the region ever since, with Indonesia's military establishing themselves as a central part the governing status-quo, said Chauvel.
Violence has marked the relationship between roughly four million Papuans and their Indonesian rulers. Amnesty International said that between 2010 and 2018, 95 Papuans fell victim to extrajudicial killings at the hands of Indonesian security forces.
"West Papua is a militarized zone. People's everyday life is colored by harassment and intimidation at the hands of security forces," said Benny Wenda, a Nobel Peace Prize nominee in self-imposed exile in the UK who leads a global push for rights in Papua.
"Everywhere you go there are armed soldiers and police. This is normal. West Papua is seen as a colony of second-class citizens where Indonesia's army can do whatever it likes," added Wenda.
Now, as close to 200 million Indonesians prepare to choose between candidates Joko and Prabowo, Papuans are demanding a vote to be released from Indonesian rule.
Earlier this year Wenda, as a guest member of the Vanuatu delegation, presented a petition to the UN Human Rights Commissioner Michelle Bachelet, requesting that the UN pressure the Indonesian government to allow Papua another referendum on independence. It was signed by 1.8 million Papuans -- half the population.
"This petition was bravely smuggled from West Papua across the border into Papua New Guinea then to Europe," Wenda said.
The Indonesian government later criticized Vanuatu for inviting Wenda into their UN delegation to see the human rights high commissioner.
"The United Nations membership decided, almost 50 years ago, the final status of Papua as part of Indonesia," said Indonesia's UN representative Aloysius Selwas Taborat, adding that Vanuatu's comments are an outrageous challenge to that United Nations decision.
"The status of Papua and West Papua as a part of Indonesia is final, irreversible and permanent."