2) What the world thinks is at stake in Australia’s election campaign
3) Why Jokowi wins in Papua: Cultural lens
----------------
https://www.radionz.co.nz/international/pacific-news/388730/indonesian-prosecutors-demand-jail-for-west-papuans-found-with-weapons
1) Indonesian prosecutors demand jail for West Papuans found with weapons 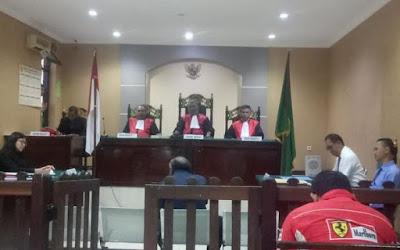 The trial of Yakonias Womsiwor and Erichzon Mandobar in Timika district court. Photo: Facebook/ Veronica Koman
1:21 pm on 8 May 2019
Indonesian prosecutors have demanded jail sentences for two West Papuans accused of possessing weapons.
Yakonias Womsiwor and Erichzon Mandobar were detained in September when authorities raided an office of the West Papua National Committee (KNPB).
According to their lawyer, Yakonias Womsiwor and Erichzon Mandobar were shot several times by security forces during the raid on the committee's Timika office.
They are being charged with disobedience against authority after weapons were found in the raid.
Prosecutors this week called for between one and two years jail for the defendants, who insist they are being framed by the military.
The trial continues today in the Timika district court.
Three other Papuans have been charged with treason after a separate December raid on the same Timika office.
Their lawyer, Veronica Koman has also filed a civil lawsuit against Indonesian police for more than $US80,000 in damages sustained to the KNPB Timika secretariat when police forcibly took control of the premises last December.
-----------------------
A Lowy Institute article on how a number of countries see Aussi election. Indonesian section below.
https://www.lowyinstitute.org/the-interpreter/what-world-thinks-stake-australia-s-election-campaign
2) What the world thinks is at stake in Australia’s election campaign
DANIEL FLITTON
Four overseas views from near neighbours to distant friends on whether Australia’s contest much matters.
"But it is another story altogether with another neighbour, Indonesia. Having just gone through a ginormous election campaign of its own in recent months – see the Lowy Institute’s interactive graphic for the extraordinary details ­– there is little appetite for more election news bubbling up from down south. In fact, journalist Febrina Firdaus believes Indonesians pay scant attention to Australia’s election at all, “except if we are living, working, or studying in Australia.”