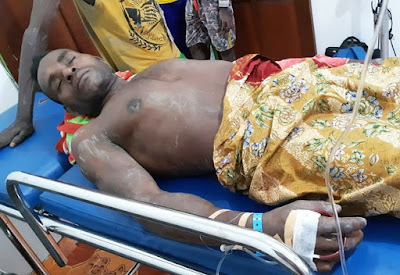 A gunshot victim is treated at a hospital in Asmat Regency, Papua, Indonesia, May 28, 2019.
Linus Dumatubun/BenarNews
Soldiers shot and killed four people in Indonesia’s insurgency-stricken Papua province during a riot reportedly started by anger over their candidate’s failure to win a seat on a local regency council, police and military officials said Tuesday.
Protesters attacked the home of a rival candidate from the same political party in the Fayit district of Asmat regency on Monday, believing he had stolen votes from the politician they supported, local police chief Andi Yoseph Enoch said.
“The soldiers fired shots because the crowd tried to attack them,” he said.
Police identified the four victims as Xaverius Sai, 40, Nikolaus Tupa, 38, Matias Amunep, 16, and Frederikus Inepi, 35.
Muhammad Aidi, the Indonesian military spokesman in Papua, said the army had invited police and the National Commission on Human Rights (Komnas HAM) to investigate.
“Yesterday afternoon, after the commander received the news, he immediately contacted the provincial police chief and the local representative of Komnas HAM to form an investigative team. The team traveled to Asmat this morning,” Aidi said.
“The service members will face the legal process. We will not cover things up,” he told BenarNews, adding that the team would work for three days to collect evidence and question witnesses.
Monday’s violence in Papua followed two nights of unrest last week in the Indonesian capital Jakarta triggered by the defeat of opposition presidential candidate Prabowo Subianto. Eight people were killed in the rioting. Prabowo rejected the result of the April 17 election and accused President Joko “Jokowi” Widodo’s government of systematic fraud at the polls.
On Tuesday, calm returned to Papua after 25 soldiers were sent from a neighboring district, according to officials.
Meanwhile, Papuan Legislative Council member Laurenzus Kadepa, called for an independent investigation without the involvement of the military and police.
“Any team that involves the security forces, who are suspected to be the perpetrators, will not produce anything satisfactory. Based on experience, perpetrators only received lenient punishment,” he told BenarNews.
The head of the Asmat electoral commission, Feronikus Ate, declined to comment while community leader Paskalis Kossay said Papua was no stranger to such incidents.
“Unfortunately, incidents of violence like that have hardly been resolved in accordance with the law. As a result, the military and the police feel they can act brutally and kill with impunity,” Kossay told BenarNews.
A low-level separatist conflict has been taking place in Papua, a region where the population is predominantly Melanesian, since the 1960s.
In December, separatist rebels killed 19 members of a crew working on a highway project in Nduga regency, prompting soldiers and police to hunt down insurgents.
Papua declared its independence from Dutch colonial rule on Dec. 1, 1961, but that was rejected by the Netherlands and later by Indonesia.
In 1963, Indonesian forces invaded the region and annexed it.
In 1969, the region held a controversial referendum in which security forces had selected slightly more than 1,000 people to agree to Papua’s formal absorption into the archipelagic nation, according to human rights advocacy groups.
——————————————
Letter in Vanuatu Daily Post in Response to previous letter.
http://dailypost.vu/opinion/letters_to_editor/waffling-on-west-papua/article_77e42db8-bc4b-5f9f-a2c9-91907e284055.html
Dear Editor,
Bruce Wearne asks a good question. When is Australian and New Zealand “going to get in behind Vanuatu’s advocacy of justice for West Papua”.
As secretary of the Australia West Papua Association in Sydney, I write regularly to our foreign affairs department (DFAT) raising concerns about the human rights situation in West Papua.
In all replies there will always be the sentence, “we recognise Indonesian sovereignty over West Papua”. It does not matter which party is in power but there are individual politicians in all parties, particularly in “The Greens” which are concerned about the situation.
There have been a number of hiccups in our relationship with Indonesia and DFAT’s policy seems to be basically not to upset Indonesia. Everybody wants to get along with their neighbours but it should not be at the expense of the West Papuan People.
One way Australia can support West Papua without incurring Indonesian criticism is to act collectively and support the call by the Pacific leaders in asking Jakarta to allow a PIF fact finding mission to West Papua.
In recent years there has been a groundswell of support throughout the Pacific region in support of the West Papuan people. Hopefully, the PIF leaders at the upcoming PIF summit in Tuvalu will continue to press Jakarta to allow a fact finding mission to the territory. They have the support of their people in doing so.
Joe Collins
AWPA (Sydney)
———

Re: Waffling on West Papua

Dear Editor,
So, when are the other regional governments — Australia and New Zealand — going to get in behind Vanuatu’s advocacy of justice for West Papua and show themselves to be openly, genuinely and actively responsible for international relations across the entire South West Pacific region? Does not Australia exist within its own lawful portion of Melanesian territory through its Torres Strait Islands?
Does it not have the Torres Strait Islander flag among its collection of official national flags? So, when is Canberra going to face up to its own responsibility for regional justice with a humble recognition of its neglect hitherto of its own place in the Melanesian region?
If it faced up to itself it may assist the UN to moderate its waffling prevarication.
Bruce Wearne
----------------------------
https://jakartaglobe.id/context/four-killed-after-supporters-of-legislative-candidate-storm-district-office-in-papua

BY : ROBERT ISIDORUS
MAY 29, 2019
Jakarta. Four people were killed and one wounded when a soldier opened fire on a mob of angry supporters of a regional legislative council candidate, who failed to win a seat in the recent election, stormed the Asmat district office in Papua on Monday.
The candidate reportedly believed he had won a seat, but the chairman of his political party replaced his name with that of another candidate.
"The legislative candidate did not accept the decision and mobilized around 350 people, armed with sharp and traditional weapons, who attacked the district office and the home of a council member named Handayan," Col. Muhammad Aidi, a spokesman for the Papua regional military command, said on Monday.
He did not reveal the identity of the losing candidate, nor the name of the political party.
Four members of the Fayit district military post, who were stationed about 50 meters from the district office, responded and tried to maintain order.
"A member of the district military post fired his gun into the air to disperse the crowd, but they became even more violent and started attacking the Army personnel. Feeling threatened, another member was forced to fire [at the crowd] while retreating toward the post to save himself and secure the post with limited support," Aidi said.
The four deceased were identified as Xaverius Sai, 40, Nikolaus Tupa, 38, Matias Amunep, 16, and Frederikus Inepi, 35.
Jhon Tatai, 25, was shot in both arms and taken to the Asmat public hospital.
A 25-member team of the Indonesian Military (TNI) and National Police have since been deployed to Fayit to stabilize the area. Aidi said the situation has returned to normal.
"After receiving the report, the Papua regional military commander, Maj. Gen. Yosua Pandit Sembiring, acted quickly and coordinated with the Papua Police chief and the National Commission on Human Rights [Komnas HAM] to form an investigation team to obtain accurate information on the incident," Aidi said.
----------------
Posted by AWPA Sydney News at 1:29 AM