Indonesia jails Pole for treason in Papua after meeting activists

Indonesia jails Pole for treason in Papua after meeting activists 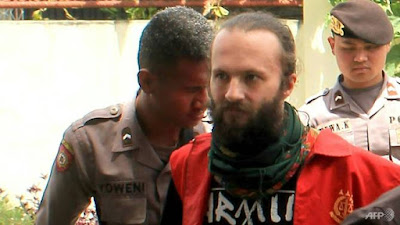 Polish national Jakub Fabian Skrzypski is accused of having links to Papuan separatists and faces up to life in prison if convicted AFP/Elvino
JAKARTA: An Indonesian court jailed on Thursday (May 2) a Polish man for five years after finding him guilty of plotting against the state with separatist activists in the easternmost province of Papua, his lawyer said.
Jakub Fabian Skrzypski was detained on Aug 26 and held in police headquarters in Papua, where he was charged under the law governing treason, which carries a maximum sentence of life in jail.
It was the first time the treason law had been used against a foreigner, his lawyer, Latifah Anum Siregar, said.

A panel of judges at the Wamena State Court found Skrzypski guilty of violating all Indonesia's treason articles and sentenced him to five years in jail, Siregar said. The prosecution had sought a 10-year sentence.

Skrzypski denied wrongdoing and said he was in the country as a tourist.
According to the prosecution, Skrzypski had been communicating with Simon Magal, a Papuan activist, on social media about spreading propaganda on independence to Europe and later met him in person.
Magal was jailed for four years.
Papua, one of Indonesia’s poorest provinces, has battled a long-running separatist movement since it was incorporated into Indonesia after a widely criticised UN-backed referendum in 1969 and it remains the country’s most heavily militarised region.
Police had earlier accused Skrzypski of discussing an arms deal in a meeting with a separatist leader, though the court found insufficient evidence to pursue that, Siregar said.
Skrzypski would appeal the sentence at a high court in Papua, his lawyer said.
Although President Joko Widodo has promised to ease media curbs in the eastern province, journalists face difficulties in reporting from the region.
Source: Reuters/na