AWPA condemns the bomb  attack on the home of Papuan journalist Victor Mambor. 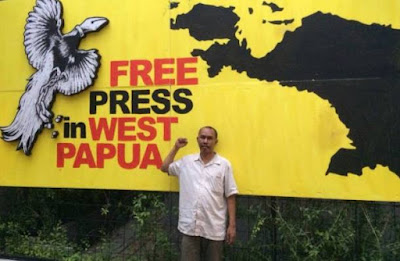 Although no one was injured in the blast near Victors home on Monday (around  4.00 am) , Victor reports that  the low-powered explosion  “ was so loud that my house shook like there was an earthquake,”

The Alliance of Independent Journalists (AJI) strongly condemned the bombing as a threat to press freedom in Papua. AJI urged the Indonesian Police to thoroughly investigate the perpetrators behind the terror.

Amnesty International Indonesia also urged the police to find those responsible.“The police must thoroughly investigate this incident, because this is not the first time … meaning there was an omission that made the perpetrators feel free to do it again, to intimidate and threaten journalists,” Amnesty’s campaign manager in Indonesia, Nurina Savitri, told BenarNews.

Joe Collins of AWPA said, “ this is not to the first time Victor has been targeted and intimated.  In April  2021 his  car was vandalised, the windows were smashed and paint sprayed on his car  by unknown persons. These acts of intimidation against local journalists in West Papua  threaten  freedom of the press.  It is the local media in West Papua that first report on human rights abuses and local journalists are crucial in reporting information on what is happening in West Papua”.

As the situation in the territory continues to deteriorate with ongoing clashes between the security forces and the OPM (the Free Papua Movement),  the West Papuan people continue to be arrested, intimated and killed by the security forces. Military operations continue to take place and these military operations  have also created  large numbers of internal refugees.

Canberra remains silent on the issue. The Australia Government is very selective in who it criticises

over their human rights record. No problem raising concerns about China’s, or Russia’s record but Canberra seems to have great difficulty in raising the human rights abuses in West Papua with Jakarta.

Its only when the media ask a question about WP that we get a response.  This is why,  “now more than ever it is crucial that journalists both local and international  can report without fear and intimidation on what is happening in West Papua” .

Hopefully in the coming year Canberra will start paying more attention to what’s  happening on its doorstep and try and improve the lives of Papuans who are one of our nearest neighbours.

Victor Mambor received the 2022 Udin Award from the Alliance of Independent Journalists (AJI) on AJI’s 28th-anniversary celebration. Victor has dedicated his life for decades to the field of journalism.  The Udin Award is AJI’s annual award to promote press freedom and freedom of expression in Indonesia. Through it, AJI wants to recognise journalists (individuals and groups), who are dedicated to the field of journalism, and become victims of physical or psychological violence because of their journalistic activities.