1) One killed, One Injured in Papua Gun Attack: Police 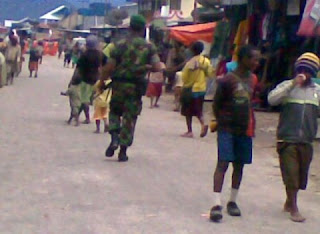 Even so, the source tabloidjubi.com mention the ongoing combing operation would be bad on the part of civilians. "Especially at the top of Mount Ekaugi the post. They watch each other, "he said.

Members of Mobile Brigade, police and soldiers on duty in that post. Every vehicle passing on the highway security forces raided. "Currently the situation is not safe. In Pugo no one, because again displaced. All fears. The house was also burnt. TPN OPM officers chased again, "said Pastor. Nico Degei, prominent people in Paniai Kingmi Papua, on Wednesday (9/1).

Brimob troops from Kelapa II in Depok, Makassar and Papua Police were sent to reinforce the Paniai district police personnel, according to Nico, has not been withdrawn. In fact, the only troops safeguarding the interests of December 1, 2012. "Until now Paniai safe. But why plus much, yet also hold back? "He asked.
National Coordinator Papua Solidarity (BREATHING), Marthen Goo in Jakarta, Tuesday (8/1) yesterday condemned the sweep by a combined military and police in the village of Pugo, Paniai. He also stated, urging the military immediately stop the violence in Papua.

Previously, Monday (7/1) afternoon, there was a firefight in the village of Pugo. The series of shots as shocked locals. Scared, they immediately chose to flee to Madi, Enarotali, and other nearby villages.
TPN OPM argues hunt, even civilians were treated rudely. Continue to be interrogated to designate where John et al. Accusing the local residents helping and hiding the separatists.
"People, especially in Paniai and surrounding Pugo not wrong. Thus, these two groups should refrain. Do not chase each other, do not shoot, because the people who later victims, "he said.
Not just a case of displacement. Fences and plants in the gardens owned by local residents damaged by the action of the shootout at the edge of the Trans-Papua's Paniai Deiyai ​​shaft. In a search operation in the village of Pugo, 13 pieces of burned houses. One house burned suspected inhabited John Magai Yogi.

There was some gunfire. However, no data on casualties on both sides. Today, the military action by the sweep continues. Situation tense since two days ago yet tranquility. Pugo Residents can not return to their homes. (Jubi / Mark You)