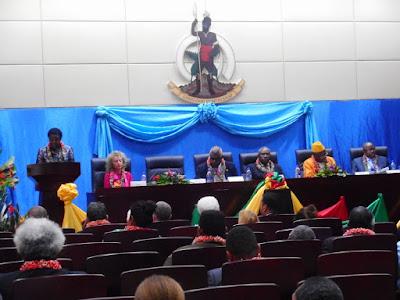 The Co-president of the EU, Cecil Kashetu Kyenge, addressing the opening session
of the Pacific regional meeting of the ACP-EU Joint Parliamentary Assembly last week.
By Jonas Cullwick
Last week’s 14th Pacific Regional ACP-EU Joint Parliamentary Assembly in Port Vila issued a five-point position of the issue of West Papuan independence.
It says Parliamentarians of the ACP-EU Parliaments can voice their concern and they can support Papuan rights, including the right to self-determination by rallying to the call from the 8 Pacific Island Countries for justice and respect for the right to self-determination.
They can get regional and global intergovernmental bodies such the African Union, CARICOM and other regional and sub-regional multilateral bodies to pass resolutions and restrict commercial and other relations with Indonesia.
As member states of the United Nations ACP–EU countries can insist on an internationally supervised referendum on independence (or at least the re-listing of West Papua as a non-self-governing territory).
Support with one voice the proposed resolutions in the upcoming Joint ACP-EU parliament meeting in month of October and also the resolution on West Papua to be adopted at ACP Council of Ministers meeting in November 2017; And call on ACP-EU Parliamentarians to urge their respective governments to address the issue of West Papua at the multilateral level and assist Indonesia to resolve this 54 year crisis.
-----------------------------------
Posted by AWPA Sydney News at 12:05 AM