Giving in to corporations for financial gain 'means trading off cultural heritage, leads to poverty for future generations' 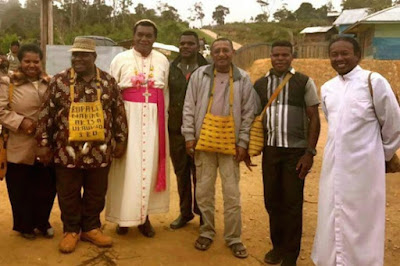 Bishop John Philip Saklil of Timika in Papua with local people in one of his parishes. Bishop Saklil has called on Papuans to stop selling their lands because they will lose their rights and identity if they do. (Photo by Benny Mawel)

A Papuan bishop has warned people that selling their land for money risks not only their future but also their cultural identity.
Bishop John Philip Saklil of Timika in Papua said land is part of the cultural identity of indigenous Papuans and selling it means they are trading off their cultural heritage.
"I’m worried that future generations of Papuans will have nothing; losing their rights to the land and its treasures," Bishop Saklil said.
"If you want to make money, stop moving to cities and remain in the villages to plant and cultivate the land," he said.
The bishop said he is afraid that if the congregation ignores his warning, Papuans will have no more land and will remain poor and destitute in their own country.
Wirya Supriyadi, coordinator of the Jayapura-based Papua People’s Network — an organization that provides advocacy for people's economic, social and cultural rights- said that losing property rights is a real threat to Papuans.
"It's a great concern that a large portion of land in Papua has been sold to developers," said Supriyadi.
He said that 441 mining and non-mining companies have already secured permits to operate in Papua and manage a concession area of about 29 million hectares from Papua's total landmass of more than 43 million hectares.
"Almost half of Papuan land has been bought up by corporations in a dishonest, deceitful way," he told ucanews.com on July 3.
John Gobay, chairman of the Papuan Customary Council, called on fellow Papuans to heed Bishop Saklil's warning as part of a campaign "or else corporations will control the whole of Papua."
"All communities must communally guard their land," he said.
He also called on the government to protect the rights of indigenous people, by creating a policy to prohibit people from selling their land, including sanctions for those breaching it.
"Without it, the bishop's call would be useless," he said, adding that the bishop's fear that Papuans will lose their ownership of land can become a reality one day if no action is taken.
Engelbertus P. Degey, head of Mapia Tengah district, agreed with the bishop, but asked the church to engage seriously with all parties.
"The church has a big influence. I hope Timika Diocese can be more focused in order that the ‘Stop Land Selling campaign' will be more effective," said Degey on July 3.
He hoped the church would unite all communities, government and non-governmental organizations to support the campaign.
————————————————
http://www.thejakartapost.com/news/2017/07/05/plane-carrying-five-passengers-loses-contact-in-wamena.html
2) Plane carrying five passengers loses contact in Papua
Jayapura, Papua | Wed, July 5, 2017 | 09:20 pm
A small aircraft carrying five people has gone missing in the country's easternmost province of Papua.
The aircraft, belonging to PT Associated Mission Aviation, went missing at 11:08 a.m. local time on Wednesday after departing from Wamena in Jayawijaya.
The flight was scheduled to arrive in Darakma village at 11:30 a.m. However, only eight minutes after takeoff, the National Search and Rescue Agency (Basarnas) received an emergency locator transmitter from the aircraft.
"The aircraft lost contact on route from Wamena to Darakma at 2:08 UTC time or about 11:08 a.m. [local time]," PT AMA director Djarot Soetanto told The Jakarta Post on Wednesday.
The aircraft, piloted by Wouter Moulders and co-piloted by Valens Ido Naibaho, carried three passengers and 508 kilograms of cargo.
A land rescue operation is currently under way to locate the aircraft, Djarot said.
The airline has sent its representatives to Wamena, namely senior pilot Eric Roberts and Nobertus Tunyanan, who is also a representative of the National Transportation Safety Commission (KNKT) in Papua. (afr/ika)
———————————————————
http://thediplomat.com/2017/07/piracy-in-australias-neighbors/
3) Piracy in Australia’s Neighbors
Capacity-building in Melanesia will have a direct impact on Australian security.
By Nathan Page July 05, 2017
Contemporary piracy conjures images of Somali pirates off the horn of Africa. Taking advantage of a region of fragility, these groups venture into international maritime trade routes well-armed in fast boats.
The issue of Somali piracy and the international response is widely covered. What is less covered is that in 2016 Southeast Asia had the second-highest incidence of piracy globally; the individual state with the highest incidence of piracy was Indonesia. This is a worrying trend as violent armed piracy grew in 2016, with 110 seafarers taken hostage and 49 held for ransom.
This piece examines the risk of piracy to Australian trade should it spread, or relocate, from Indonesia across the border to the Melanesian “arch of instability.” Australia is a country that relies on maritime trade for its economic prosperity, and subsequently, existing piracy is of grave concern.
Enjoying this article? Click here to subscribe for full access. Just $5 a month.

Security in Indonesia is vital for global trade. Half of the world’s total annual seaborne trade passes through the Malacca, Sunda, and Lombok Straits. Combined, these straits comprise the vital linkage for Indo-Pacific trade. The Asia-Pacific region accounts for over 40 percent of global GDP and approximately one-third of the world’s merchandise exports. Arguably, the Malacca Strait is now, or is destined to be, the world’s most important strait. A disruption in the Malacca Strait would financially impact approximately 400 shipping lanes that link 700 ports worldwide.
Trans-Indian Ocean trade bypassing the Malacca Strait would need to traverse the Sunda Strait, which is too shallow for most container ships, and at an average speed of 15 knots would add 1.5 days of travel time for docking at Singapore. The Lombok Strait is farther still and would require an additional 3.5 days of travel time. These kinds of delays would have a significant economic impact on Australia in terms of imports and exports. However, there is little regional coordination planned to combat disruptive piracy.
What if piracy moves east? Fragile states are conflict prone, with limited reach of law and order into provinces. These conditions provide operational space for piracy and maritime terrorism. State fragility in Melanesia is thus of concern to Australia’s maritime security, as these states press against Australia’s exclusive economic zone.
The Torres Strait links the Arafura and Coral Seas and the Vitiaz Strait requires passage through the Coral, Solomon, and Bismarck Seas. Consequently, Australia’s eastern seaboard trade routes are severed by an “arch of instability.”
In fact, Australia and Papua New Guinea are so close that a special relationship was negotiated allowing free cross-border movement of people from 14 Australian island communities and a further 13 Papua New Guinea villages. This bilateral relationship is an admission that, when it comes to the day-to-day lived experience of the Torres Strait peoples, the dividing border is a political fiction.
If a Melanesian state failed this may facilitate local access to high-powered small-arms. This sequence of events would make it very difficult for Australia to completely control its borders and prevent piracy and maritime terrorism in this vital northern trading route.
Melanesia has a history of weapons leakage from government stockpiles and arms flow across borders. A looming threat of a breakdown in law and order in PNG or Solomon Islands may facilitate trans-national criminal networks operating out of these safe havens with increased access to Australian trade routes or even the mainland.
Alternatively, effective policing in Southeast Asia could push transnational piracy operations to migrate across neighboring borders. Hence, these threats should be factored into contingency plans when considering the worth of expending Australian blood and treasure in security capacity building in Melanesia.
Prevention is always more desirable from a humanitarian perspective, and more cost effective, than remedy. Criticism of Australia’s security and stabilization interventions in Melanesia ought to remember the alternatives of a return to violence.
Australia needs to remain committed to capacity building in Melanesian states to counter the threat of piracy. A commitment to Australia’s Pacific Maritime Security Program, and specifically the Patrol Boat Program, is necessary for supporting the regional security architecture. Australia should assist PNG’s Maritime Security Division through financial assistance and technology, training, and knowledge exchange to enable better coordination.
Regional stability through increased security cohesion is a win-win for states involved. Australia needs to collaborate with Melanesian countries to improve regional resilience to piracy. Of its neighbors, Australia is the only state member of the Regional Cooperation Agreement on Combating Piracy and Armed Robbery against Ships in Asia (ReCAAP).
Security in its northern neighbors secures Australia because those jurisdictions are custodians of Australia’s northern approaches. Better information sharing and security coordination presupposes that there is systematic information gathering to be shared and capable security infrastructure for Australia to coordinate with. In this, Australia should assist in capacity-building to reap long-term benefits. Anti-piracy in Melanesia will require investment, gifting, and effective diplomacy on Australia’s behalf for Australia’s benefit.
Nathan Page has a Masters of Development Studies from University of Melbourne specializing in conflict and development. Nathan is policy consultant with the Center for Armed Violence Reduction.
Posted by AWPA Sydney News at 1:11 PM