1) Call for NZ govt to speak out on West Papua

2) WHY PACIFIC AND MĀORI COMMUNITIES ARE RISING UP FOR WEST PAPUA
3) Cargo Aircraft Skids Off Runway at Wamena Airport
——————————————————————————————————
http://www.radionz.co.nz/international/pacific-news/335352/call-for-nz-govt-to-speak-out-on-west-papua
1) Call for NZ govt to speak out on West Papua
5:45 pm today
A campaigner for West Papua says the New Zealand government should be speaking out about the treatment of pro-independence demonstrators by Indonesian police.
More than 100 Papuans - mainly members of the West Papua National Committee, or KNPB - were detained between 30 June and 6 July in Nabire, following a protest march to the city's police station to demand the release of one of the group's activists.
The Indonesian government denied that the protesters were arrested and said they were all returned to where they had come from after signing a declaration that they would not violate law and order.
However, the New Zealand campaigner Maire Leadbetter said the demonstrators were held against their will, interrogated and in some cases beaten.
She said the Indonesian government was still detaining people who set out on peaceful demonstrations, a tactic she described as an assault on freedom of expression.
"It's shocking and our government should be standing up and saying far more than they are doing. I have written to Gerry Brownlee - the minister of foreign affairs about it this week," said Ms Leadbetter.
————————————————-
HTTPS://WWW.VICE.COM/EN_NZ/ARTICLE/QVPXBD/WHY-PACIFIC-AND-MAORI-COMMUNITIES-ARE-RISING-UP-FOR-WEST-PAPUA?UTM_SOURCE=VICEFBLOCALNZ
2) WHY PACIFIC AND MĀORI COMMUNITIES ARE RISING UP FOR WEST PAPUA
JAMES BORROWDALE JUL 18 2017, 9:20AM

The independence movement is largely ignored by wider—whiter—New Zealand society.

Like apartheid South Africa, I kept hearing. For a long time, the horrors behind the curtain thrown up by South Africa's racist government weren't widely known in this country. It wasn't until the 1981 Springboks tour that the small band of activists, who had all the time been committed to the cause, were able to turn that affair into a nation-splitting episode—and to put increased international pressure on the regime.
West Papua hasn't had its Springboks tour yet; it is often called the world's forgotten occupation. Indonesia has held formal control over West Papua since 1962's New York Agreement granted the South East Asian superpower the former Dutch colony, with the promise of a fair vote on self-determination by 1969. That never arrived: 1969's Act of Free Choice, in which just 0.2 percent of the population voted—under extreme duress—determined that West Papua was to remain part of Indonesia, a country with which it had no linguistic, cultural, or racial links.
Ever since, the repression of the indigenous population has been ruthless. The figure of 100,000 people killed by Indonesian security forces is commonly cited, but estimates run as high as 500,000. Mass killings of Papuans in the tribal highlands in the 1970s met the criteria for genocide, the Asia Human Rights Commission reported. And the brutality continues: a 2016 report conducted by the Archdiocese of Brisbane titled We Will Lose Everything contains reports of atrocities committed throughout 2015, including extrajudicial executions, torture, and firing on peaceful protestors. Methods of torture, another reportclaims, include rape, slashing with bayonets, and electrification.
Clearly, something horrific is happening—and has been for a long time—in the South Pacific. New Zealand's response? Successive governments, perhaps wary of aggravating an important trading partner, have refused to dispute Indonesia's territorial borders. The media hasn't done much better—VICE NZ was one of just a handful of outlets to cover a visit to New Zealand by Benny Wenda, the leader-in-exile of the West Papuan independence movement and a man twice nominated for the Nobel Peace Prize, earlier this year.
He's a man with a fascinating tale to tell—a childhood spent on the run in the bush, horrors witnessed, arrest, escape, a life-long commitment to the cause of his people. And it's a story that is percolating at some political level, with 11 New Zealand MPs across four parties now signatories of the International Parliamentarians for West Papua declaration. Where, then, I wondered, were the profiles in the Saturday newspapers, the coverage on Sunday-night current-affairs shows? 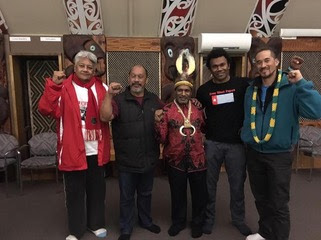