3) Thirty one inmates break out of Jayapura jail
---------------------------------------------------------
https://www.greenleft.org.au/content/indonesia-firebombs-west-papuan-village
1) Indonesia firebombs West Papuan village
GLW July 22, 2018
Indonesia &
West Papua
Indonesia has repeatedly fire-bombed a highland village in West Papuam, where indigenous Papuans have lived for thousands of years, the United Liberation Movement for West Papua (ULMWP) said in a July 16 statement.
ULMWP spokesperson Jacob Rumbiak severely criticised the Indonesian government for its ongoing strafing the village of Kalguru since the June 27 local government elections. Rumbiak called for the United Nations to intervene and mediate talks.
Video has emerged of military-helicopters circling the flaming village after the election, and extra military, police and intelligence were sent to the isolated highland region ahead of the elections.
“The Indonesian government’s incineration of Kalguru is the republic’s scorched-earth policy at work; leaving us with a mass of heritage-charcoal and hundreds of women and children in the forest without food and medicine,” Rumbiak said.
ULMP said that no one knew how many had been killed by Indonesia’s recent attacks this month.
————————————————
https://www.ulmwp.org/the-ulmwp-opens-new-office-inside-west-papua 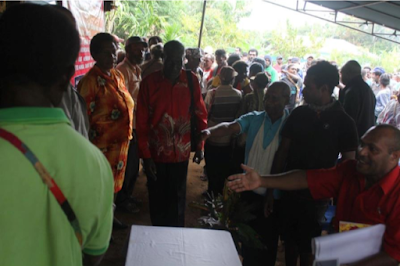