2) West Papua issue ‘a sensitive subject’
3) Nihopara clarifies MACFest concerns
4) 95% of Papuans support Jokowi’s reelection: Enembe-Tinal
-------------------------------
https://www.radionz.co.nz/news/pacific/361534/png-pm-urges-pacific-countries-to-take-papua-issue-to-un
1) PNG PM urges Pacific countries to take Papua issue to UN
Papua New Guinea's prime minister has reportedly encouraged regional countries to take the issue of West Papua to the United Nations decolonisation committee.
Peter O'Neill made the comment while in Fiji where he was the keynote speaker at a public lecture on "Pacific Regionalism".
The Fiji Times reports that when asked whether Indonesian-ruled Papua, or West Papua, could be part of Pacific regionalism, Mr O'Neill admitted it was a sensitive subject for PNG.
However he pointed out that West Papua was part of the Melanesian Spearhead Group and has participated in regional discussions.
In recent years members of the MSG, notably Vanuatu and Solomon Islands, as well as other Pacific countries, have been vocal about West Papua in international fora.
Their concern centres on violations against the basic human rights of West Papuans, and claims that Papuans have been denied a legitimate self-determination process.
Mr O'Neill said PNG had been speaking frankly to Indonesia's government about issues of human rights abuses in Papua region.
But he said PNG urged regional members who were concerned about West Papua to take the issue up at the UN.
According to the Fiji Times, Mr O'Neill said PNG was encouraging that this be put to the UN decolonisation committee.
It's not the first time Mr O'Neill has spoken about his country's concerns about human rights abuses in neighouring West Papua, although his government officially supports Indonesian sovereignty on the western half of New Guinea.
However two years ago, Mr O'Neill expressed PNG's desire for West Papuans to have more autonomy.
The Indonesian provinces of Papua and West Papua were granted Special Autonomy Status by Jakarta in 2001.
--------------------------------- 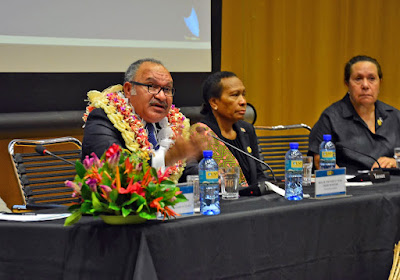 Papua New Guinea Prime Minister Peter O'Neill during the public lecture at the Japan-Pacific ICT Multi Purpose Theatre in Suva yesterday. Picture: JONACANI LALAKOBAUWEST Papua is still a sensitive subject for Papua New Guinea, says Prime Minister Peter O’Neill.
Mr O’Neill made the comment after a question posed to him by Jope Tarai of the University of the South Pacific on whether West Papua could be a part of Pacific regionalism.
In response, Mr O’Neill said West Papua was part of the Melanesian spearhead group (MSG) and had participated in regional discussions.
“As you know West Papua is a member of MSG so they have been participating in some regional discussions with regards to this issue, but more importantly we are speaking in very frank terms with the Indonesian Government about issues on human rights abuses especially in the West Papuan provinces,” Mr O’Neill said.
Mr O’Neill said PNG was encouraging regional members to take the issue of West Papua to the UN.“We need to encourage our regional members who are at the forefront of negotiations dealing with this agenda and discussions that we must take it up to the United Nations.
“We are encouraging that this be put to the decolonisation committee of the United Nations,” he said.
--------------------------------
http://www.solomonstarnews.com/index.php/news/national/item/20680-nihopara-clarifies-macfest-concerns
3) Nihopara clarifies MACFest concerns
10 July 2018
ALL Melanesian Spearhead Group (MSG) member countries have been invited to participate at this year’s festival in Honiara.
That’s according to the 6th Melanesian Arts and Cultural Festival (MACFest) National Organising Committee.Committee chair and Permanent Secretary of the Ministry of Culture and Tourism, Andrew Nihopara, made the clarification amidst concerns and sentiments raised by certain groups and individuals about the absence of the Melanesian provinces of Indonesia at the festival. “My committee has formally invited all members including Melanesians in other countries such as Indonesia, Timor Leste and the Torres Strait Islands of Australia,” Mr Nihopara said. “The absence of the Melanesian Provinces of Indonesia, including the Papua and West Papuan provinces,is a matter for the Indonesian Government to clarify,” he added. “We have sent an invitation to Jakarta through the normal government process but we have not received any response from them.  “The official invitation letter specifically mentioned the provinces of East Nusa, Tenggara, Maluku, North Maluku, Papua and West Papua.”Mr Nihopara said for groups and individuals to blame the Government, especially; the National Organising Committee for failing to invite Melanesians in Indonesia is baseless and unfounded. “My Committee has prepared a traditional hut for the Melanesian provinces of Indonesia at the main Festival Village in anticipation of their participation but we have not received any response from Jakarta following our formal invitation despite numerous attempts,” he explained. Meanwhile, Mr Nihopara said the incident last Saturday where Police have confiscated the West Papuan Morning Star flag from a local human rights activist was an isolated incident unrelated to MACFest. He said such groups and individuals have the right to voice their concerns but there are proper processes to follow in order to avoid confrontations and problems with law enforcement officers at the festival. Mr Nihopara said the MACFest-NOC is doing its best to bring in representatives from the Melanesian Provinces of Indonesia to share and promote their Melanesian culture and identity at the festival but have not received any response through official channels in Jakarta. He encouraged the Public to respect the festival and to avoid causing any uncalled-for situation to the current peaceful situation enjoyed at the festival. Mr Nihopara said police presence at the main festival venues is aimed at maintaining law and order at the festival in the interest of national security. The festival will formally close today
---------------------------
http://www.thejakartapost.com/news/2018/07/10/95-of-papuans-support-jokowis-reelection-enembe-tinal.html
4) 95% of Papuans support Jokowi’s reelection: Enembe-Tinal
Nethy Dharma Somba
Jayapura, Papua | Tue, July 10, 2018 | 01:52 pm
The victory of incumbent candidate pair Lukas Enembe-Klemen Tinal during the Papua gubernatorial election on June 27 will not affect support for President Joko “Jokowi” Widodo in the province, although the pair was not supported by the ruling Indonesian Democratic Party of Struggle (PDI-P), an official said.
Tinal, the incumbent deputy governor, made the statement after the Papua General Elections Commission (KPU Papua) confirmed the vote recapitulation results, which showed the defeat of ruling party-backed John Wempi Wetipo- Habel Melkias Suwae.
Supported by a coalition of nine political parties, Enembe-Tinal won 1.93 million or around 67.54 percent of the vote. With support from the PDI-P and the opposition party, Gerindra, Wetipo-Suwae won 932,008 or 32.46 percent of the vote.
“There is no correlation between political parties’ support in the Papua gubernatorial election and the support of Papuan people for a particular presidential candidate in the 2019 election. Although the political party that supports Pak Jokowi did not win in Papua; 95 percent of Papuan people still support President Jokowi,” said Tinal, who is on the Golkar Party’s central executive board in Papua.
The PDI-P, he said, was not the only party backing Jokowi as he sought reelection.
Tinal said Papuans’ support for Jokowi was driven by the President’s attention to Papua. Since Indonesia’s independence in 1945, he said, Jokowi had been the only president to visit Papua nine times within a four-year term. “This is an honor for us, the Papuan people.” (swa/ebf)
----------------------
Posted by AWPA Sydney News at 2:22 AM