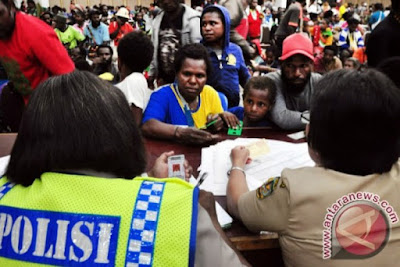 (Photos File) - Thousand of refugees from three village in Tembagapura District were registered by local authority in Timika, Papua onn Monday, Nov 19, 2017. They fled their homes as firefights occurred between the armed criminal group and security personnel. (ANTARA FOTO/SPEDY)
Wamena, Papua (ANTARA News) - Some 320 children from Nduga district in Papua province have fled to the neighboring Jayawijaya district along with their parents or on their own, as firefights are ongoing between the armed criminal group and security personnel.The children are students of 10 elementary schools, five junior high schools and two senior high schools in Nduga district, Ence Geong, a member of the team in charge of handling Nduga refugees, said in Wamena, the capital of Jayawijaya district, on Friday, Feb 8."When we gathered them at this church building on Monday (February 4), their number ran into more than five hundred. Since their number is large, they were accommodated at the church which has a capacity of accommodating 800 to 1000 people," Geong said.He said the team is still coordinating with several parties to set up emergency schooling so that the children could continue to study."We need other supporting facilities, such as student dormitories because some of them live far from the school here," he said.The refugees come from several sub-districts including Mbua, Yal, Ndal, Mapenduma, Nirkuri, Mbulmu Yalma, Ininggal, Mam and Iniye.Headmaster of Yigi elementary school Ledy B Welly, who is also taking refuge in Jayawijaya, said the children continued to study although the number of classrooms and learning facilities is limited."We have not studied for more than one month. To catch up with our studies, the teachers will hold a meeting to find a solution," he said.Reporting by Marius Frisson YewunEditing by Suharto
------------------------------------------
https://thediplomat.com/2019/02/polish-mans-treason-trial-spotlights-indonesias-papua-problem/
2) Polish Man's Treason Trial Spotlights Indonesia's Papua Problem
The ongoing trial has raised further concerns regarding a longstanding issue in the Southeast Asian state.
By Associated Press February 09, 2019
A Polish man on trial for treason in Indonesia after meeting with Papuan independence supporters said that visitors to his prison assaulted him and threatened to kill him as guards watched. The development has once again spotlighted the issue of Papua, one of several challenges Jakarta has faced on the democracy and human rights front.
Papua, which shares a border with independent Papua New Guinea north of Australia, is a former Dutch colony which had declared itself independent in 1961 only to be subsequently taken control of by Indonesia a few years later. A low-level insurgency has persisted against the government for decades amid allegations of extrajudicial killings and human rights violations by Indonesian security forces, and it remains an immensely sensitive issue for the country.
In one high-profile incident in 2018, last August, Jakup Skrypski,  a globe-trotter who has lived in Switzerland for years, was arrested in Indonesia’s easternmost Papua region and accused of plotting against the state. He is on trial along with a Papaun he had been in contact with, Simon Magal, and the trial had begun last month after multiple postponements.
As this has occurred, more details have begun to be released about the incident and the Papua problem more generally. A handwritten two-page statement by Jakub Skrzypski details three consecutive days beginning January 30 in which he was assaulted or threatened by men wearing T-shirts emblazoned with “Brimob,” an abbreviated name for Indonesia’s paramilitary police.
Skrzypski’s statement, provided to The Associated Press by one of his lawyers, said he was punched through cell-door bars at a police detention center in Wamena and spat on by the men who threatened to return to kill him if he is found guilty.
“What is striking is the total indifference of the arrest guards. I was even wondering if they would open the cell doors to allow us to be harassed inside or taken away,” he wrote.
Jayawijaya district police chief Tonny Ananda denied any mistreatment and said officials had “tried our best” to satisfy Skrzypski’z requests for supplies such as milk.
“He is always dissatisfied and made up bad stories to discredit Indonesian police,” Ananda said.
Skrzypski faces up to 20 years in prison and his case has highlighted Indonesia’s extreme sensitivity about the long-running insurgency in the Papua region, which occupies the western half of the island of New Guinea. The Indonesian government restricts foreign journalists from reporting in the region.
Human rights lawyer Latifah Anum Siregar said she protested Skrzypski’s treatment at a court hearing on Thursday.
By The Associated Press, with additional reporting by The Diplomat.
--------------------------------
Posted by AWPA Sydney News at 12:22 AM