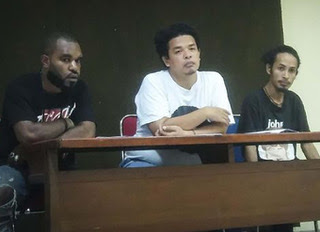 Indonesian People's Front for West Papua spokesperson Surya Anta (centre) speaking at LBH Jakarta last week. Image: CNN Indonesia
Pacific Media Watch Newsdesk
West Papuan people will not take part in Indonesia’s 2019 presidential and legislative elections, say the Indonesian People’s Front for West Papua (FRI-WP) and the Papuan Student Alliance (AMP).
This is because they accuse the Indonesian government of illegal political practices in Papua, of failing to uphold the rights of the Papuan people and because both presidential candidates have a bad track record on Papua.
“Indonesia is a state which since the declaration of the Trikora operation on December 19, 1961, has conducted illegal political activities in the territory”, said FRI-WP spokesperson Surya Anta at the Jakarta Legal Aid Foundation (LBH Jakarta) offices in Central Jakarta last week.
READ MORE: Surprise at no mention of Papua in presidential hopefuls’ speeches
“Because of this we are taking a position and declaring that we will not take part in the 2019 presidential or legislative elections,” he said.
Anta explained that what they mean by the territory of West Papua was an area extending from Numbai to Merauke, Raja Ampat to Baliem and Biak Island to Adi Island.
The groups also believe that the contestants in the 2019 election on April 17 are the same as those in previous elections where candidates are only interested in gathering votes from the Papuan people.
However, there has been no effort by the legislative, presidential or vice-presidential candidates to uphold the rights of the West Papuan people, they say.
Maintaining colonialismSpeaking in the same vein, Student Struggle Center for National Liberation (Pembebasan) national collective secretary-general Samsi Mahmud said that the Papuan people were not interested in the 2019 elections.
Aside from Indonesia’s illegal political activities, according to Mahmud none of the political parties are articulating the wishes of the Papuan people and the elections are only aimed at maintaining the practice of colonialism.
“[The elections] are a tool for the colonial government to put local power holders in place to safeguard their interests”, said Mahmud.
AMP member Erepul Sama said there was no difference between the two presidential candidates, incumbent President Joko “Jokowi” Widodo and Prabowo Subianto, particularly in their handling of human rights violations.
“Prabowo himself has a bad track record in Papua such as the Mapenduma incident. But this doesn’t mean that Jokowi is any better”, said Sama.
“Jokowi has allowed human rights violations to occur again and again, for example in the bloody Paniai case which has still not been resolved”, he added.
Aside from declaring that they will not take part in the 2019 elections, the FRP-WP and the AMP made three other demands:
BackgroundOperation Trikora was declared by Indonesian founding President Sukarno in the Central Java city of Yogyakarta on December 19, 1961.
It was an Indonesian military operation aimed at harassing and forcing the Dutch out of Netherlands New Guinea in 1961-62 rather than one intended to suppress a nascent independence movement.
The Mapenduma operation was a botched rescue operation in the remote Mapenduma area of West Papua led by then Kopassus commander Prabowo Subianto in 1996 to secure the release of World Wildlife Fund researches taken hostage by the Free Papua Movement.
The attempt ended in a military attack on Geselema village resulting in the death of up to eight civilians.
On December 8, 2014, barely two months after Widodo was sworn in as president, five students were killed and 17 others seriously injured when police and military opened fire on a group of protesters and local residents in the town of Enarotali, Paniai regency.
Shortly after the incident, Widodo personally pledged to resolve the case but four years into his presidency no one has been held accountable for the shootings.
Translated by James Balowski for the Indo-Left News Service. The original title of the article was “Golput, Aktivis West Papua Tuding Jokowi Prabowo Sama Saja”.
---------------------------------------
https://en.tempo.co/read/1177059/papua-regional-secretary-named-suspect-in-alleged-assault-on-kpk?https://en.tempo.co/index&campaign=https://en.tempo.co/index_Click_2
2) Papua Regional Secretary Named Suspect in Alleged Assault on KPK
Translator: Dewi Elvia Muthiariny
Editor: Markus Wisnu Murti
18 February 2019 21:31 WIB
TEMPO.CO, Jakarta - The regional secretary of Papua, Hery Dosinaen, was named suspect in an alleged assault against investigators of the Corruption Eradication Commission (KPK) in Borobudur Hotel, Central Jakarta, on late Saturday, February 2.
“From today's investigation, we have raised the status of the Papua regional secretary from witness to suspect,” said Jakarta Police spokesperson Sr. Comr. Argo Yuwono in his office on Monday.
Read: Assault on KPK Members, Police to Question Papua Regional Secretary
According to Argo, the decision was based on witnesses' testimonies and pieces of evidence as well as other indications collected by the police. However, Argo stopped short of detailing Hery’s role in the incident. “The examination is still underway, so [the role will be revealed] later,” he added.
Hery was grilled at the Jakarta Police’s General Crime Directorate. He arrived at 12:30 p.m. with his lawyer.
According to Argo, Hery was suspected of violating Article 351 of the Criminal Code (KUHP) on persecution and faced a possible sentence of five years behind bars at maximum. Argo, however, could not confirm yet on the suspect's detention. “That depends on the investigators,” he noted.
Read: DPRP Speaker Rebuts Attack against Two KPK Investigators
Earlier, KPK spokesman Febri Diansyah said that two KPK investigators were assaulted while stationed at Borobudur Hotel on February 2. The two personnel were tasked to investigate a public report on alleged corruption committed by officials of the Papua administration.
ADAM PRIREZA
-------------
Posted by AWPA Sydney News at 12:29 PM