02/11/2019, 15.27
by Mathias Hariyadi
The local bishop, Mgr Aloysius Murwito, also ordained three deacons. Religious vocations in the diocese are rare because of the lack of a minor seminary and ethnic Asmat’s nomadic lifestyle. Last year, more than 70 children died from measles and malnutrition-related diseases in the area. 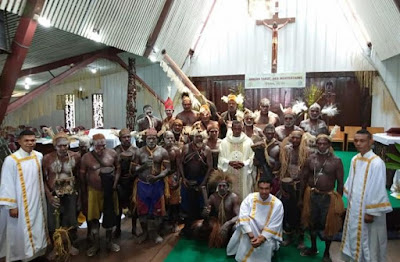 Jakarta (AsiaNews) – Fr Moses Amiset is the first ethnic Asmat to be ordained priest. This is a source of joy for the entire Catholic Church in Indonesia, but above all for the Diocese of Agats, in Papua, Indonesia’s easternmost province whose population is predominantly Christian.

The ceremony took place on 2 February at Holy Cross Cathedral in Agats. The local bishop, Mgr Aloysius Murwito, also ordained three deacons during the service: Br Laurensius A. Kupea, Br Innocentius Nurmalay and Br Yohanis Laritembun.
Religious vocations are rare in the diocese, Papua’s poorest and remotest area, for a number of reasons, starting with, unlike other ecclesiastic provinces, the lack of a minor seminary.
Most seminarians who eventually come to the diocese are born into local families who moved to the Maluku (Moluccas) and Flores islands, Indonesia’s two "Catholic” territories. For ethnic Asmat, the religious vocation is made that much harder by their nomadic lifestyle.
Fr Bobby Harimapen, parish priest at Agats’s cathedral, told AsiaNews that Mgr Murwito assigned Fr Moses to Kamur parish.

Born in 1982 in Pau, Asmat Regency, the future priest later moved to Tual (in the South-Eastern Moluccas) to attend high school.
Between 2005 and 2006, he completed his preparatory year for the religious life in Sorong, the largest city in West Papua province.
Fr Moses went to study Philosophy and Theology at Jayapura, the capital of Papua, before performing pastoral work in Bayun parish, between 2013 and 2014. He was ordained deacon in 2017 in Atsj parish.
The Diocese of Agats covers a very isolated territory, with unique characteristics, found nowhere else in the huge country.
Last year, the region was hit by a severe humanitarian crisis, with more than 70 children dying from measles and malnutrition-related diseases.
The local Catholic Church was among the first institutions to help the local indigenous population. Mgr Murwito coordinated two teams of volunteers who hand ed out aid in several villages of the hard-to-get-to territory.
Moving around in the area is very dangerous physically and expensive. In 2013, AsiaNews 's reporter accompanied the Bishop of Agats on a trip to its most distant settlements on a pastoral mission.
----------------------------------

Reporter: Antara  2 hours ago
Jayapura, Papua, (ANTARA News)- The Health Ministry has distributed 100 small packs of dengue rapid diagnostic test (RDT) instrument to dengue-affected districts and municipality in the easternmost Indonesian province of Papua.
"The Papua Health Service has distributed RDT instruments from the Health Ministry to eight districts and municipality in Papua since Saturday (Feb 9)," Chief of the Disease Prevention and Control of the Papua Health Service Dr Aaron Rumainum said here on Monday.
Rumainum noted that the instrument will be able to detect whether it is dengue fever or not. Each of the small packs contains 10 units of RDT.
The eight districts are Biak Numfor, Timika, Nabire, Merauke, Kota Jayapura, Boven Digoel, Asmat, and Sarmi.
"We ask district health service office in each district to buy RDT if they run out of it," he added.
As many as 15,132 cases of dengue fever were reported in Indonesia, with 145 deaths, as of Feb 1, 2019, according to the Health Ministry.
East Java Province witnessed the highest number of dengue cases, with 3,074 cases, resulting in 52 deaths, Siti Nadia Tarmizi, the ministry`s director for vector-borne and zoonotic diseases, stated on Friday.
West Java ranked second, with 2,204 cases, causing 14 deaths; followed by East Nusa Tenggara, with 1,092 cases, resulting in 13 deaths; and North Sumatra, with 1,071 cases, leading to 13 deaths.
The ministry recorded 53,075 cases of dengue fever in 2018; 68,407 cases in 2017; and 204,171 cases in 2016.
Reporting by Musa Abubar, Suharto