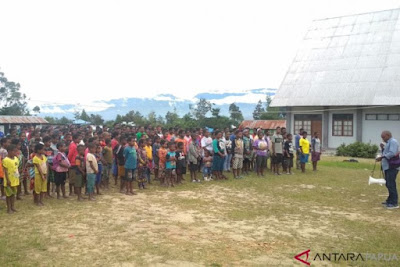 School children in Nduga subdistrict have taken refuge in safer places in the Jayawijaya District's areas following exchanges of fires between armed Papuan rebels and security personnel. (ANTARA News/Marius Frisson Yewun)
Wamena, Papua, (ANTARA News) - Over 80 teachers along with several hundred of their students have taken refuge in safer places in the Jayawijaya District's areas following recent exchanges of fires between armed Papuan rebels and security personnel.A teacher in Nduga Sub-district, Jayawijaya District, Papua Province, informed Antara here on Wednesday that the teaching staff, who have taken refuge, teach at 10 elementary schools, five junior high schools, and two senior high schools in the sub-district area."We cannot as yet give you further information on this matter. Let the head of the sub-district's educational affairs office do that," the teacher, who spoke on condition of anonymity, noted.A total of 406 students fled their houses without carrying along their school equipment, such as books, pencils, and pens, owing to the shock and trauma they experienced on hearing the sounds of exchanging gunfires.Meanwhile, Ence Geong, coordinator of the Voluntary Team for Assisting Nduga Sub-district's Refugees, noted in the Sinakma area of Jayawijaya District that the local authorities continue to gather detailed information on the displaced teachers."According to our statistical data, there are 120 teachers in Nduga Sub-district," he remarked, adding that the teachers taking refuge will be placed in emergency classrooms, so that their students could still be taught.Those teachers would be spread across 12 classrooms."We are so thankful for the teachers' initiatives to give each of their students a book and pen," Geong noted.A circle of violence remains unstoppable in the Indonesian province of Papua. On February 2, 2019, a civilian was gunned down by armed Papuan rebels in a village of Jayawijaya District.This murder of Sugeng Efendi, a resident of Wuyukwi Village, Mulia Sub-district, has increased the death toll of civilians in the hands of armed Papuan rebels following the killings of 31 construction workers in December 2018.The 25-year-old kiosk keeper was shot dead by an armed Papuan rebel on Saturday evening. Efendi's murder took place two days after the Free Papua Movement (OPM) announced its official support for its armed wing's declaration of war against Indonesia.According to Radio New Zealand (RNZ), the announcement was made by OPM spokesman Jeffrey Bomanak at a press conference held in Port Moresby, the capital city of Papua New Guinea, on January 31, 2019.RNZ quoted Bomanak as saying that the war against the Unitary State of the Republic of Indonesia "would not end until Jakarta agreed to meet for peaceful negotiations, for which the OPM is establishing a team of negotiators."In fact, over the past year, the armed Papuan separatists had not only campaigned a series of killings of civilians and security personnel, but they were also involved in other serious crimes, such as holding civilians and hostages and raping the victims.Reporting by Marius Frisson Yewun, Rahmad Nasution
Posted by AWPA Sydney News at 12:18 PM