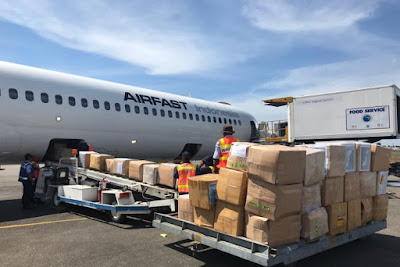 Jayapura (ANTARA) - PT Freeport Indonesia (PTFI) sent aid worth three tons to residents affected by the flash floods in Sentani, Jayapura District, Papua, on Friday.Kerry Yarangga, PTFI's Corporate Communication Manager (Corcom), when contacted from Jayapura City on Friday night, said that such assistance was sent from Mozes Kilangin airport, Timika, Mimika District, to Sentani airport, Jayapura District, Papua."So, this assistance is actually from community friends from Freeport, or employees. They are under the leadership of Paul Laly. They open opportunities for anyone, for employees and the community to contribute to residents in Sentani," he said.He mentioned that donations of three tons or 153 koli contained various kinds of goods, ranging from toddler, children and adult clothes to blankets, milk, instant noodles and other basic foods."Thus, PTFI as one of the copper, silver and gold mining companies in the world, since Sunday night (3/17), a few hours after the flash flood disaster struck Jayapura District and Jayapura City, Papua, sent and distributed various relief goods greatly needed by flood victims," he said.Kerry also added that the assistance did not stop there, but in an emergency situation of up to 14 days as an emergency response by the Jayapura District Government, assistance would be sent again.In Sentani, Jayapura District, it appears that the PT. FI Volunteer Team received three tons of donated items handed over by the PTFI extended family, who are domiciled in Mimika Regency.Freeport claims the first time to establish a humanitarian aid post in coordination and cooperation with the Jayapura District Government, the National Disaster Mitigation Board (BNPB), National Search and Rescue Agency (Basarnas), the Indonesian military and policei.     Editor: Suharto
-------------------
https://thenewsrep.com/
2) A group of rebels took on the Indonesian Army with medieval weapons
March saw an escalation of insurgency between the West Papuan rebels and the Indonesian Army (TNI), with a total body count of 15 from one clash alone, according to sources within the TNI. During the engagement, a force of 50 to 70 West Papuan rebels – carrying medieval weapons like spears, bows and arrows – along with some firearms, attacked a 25-strong Indonesian Army patrol.
Three TNI soldiers were killed, compared to a stated seven West Papuan rebel deaths, despite the TNI only being able to locate the body of a single dead rebel. The TNI stated other rebel bodies couldn’t be found because they were most likely taken away by the survivors. West Papuan rebel accounts of the clash differ, with rebel leader Sebby Sambom claiming five TNI soldiers were killed and all rebels survived.
The TNI soldiers were providing security for repair and construction work along the trans-Papua toll road project in Mugi when the incident occurred. The road is an ambitious project by the Indonesian government to open up the underdeveloped yet resource-rich region to the wider Indonesian economy. Sources within the West Papuan rebels attribute the attack as retaliation against purported interrogations of a West Papuan villager from the Windi Village of Derakma District and the burning of five traditional houses by the Indonesian Army.
West Papua is a mineral-rich province of Indonesia that was absorbed after the Dutch colonial withdrawal in 1962. Papuan residents of the island province have disputed the legitimacy of Indonesia’s military rule over the province. That rule has been criticized for its harsh military control in the face of thinly spread public condemnation. Australia and New Zealand, often the voices of reason in such disputes, have been reticent to criticize the Indonesian government.
In addition to being the second-most underdeveloped of Indonesia’s provinces, it is home to the largest gold mine and the second largest copper mine in the world. Indonesia continues to restrict foreign access to the region due to sensitivities regarding its suppression of Papuan nationalism.
While the violence in West Papua is not new, December 2018 marked an uptick in the severity of rebel attacks when up to 19 workers were killed in a single attack by West Papuan rebels. Similar to the most recent outbreak of violence, those killed were working on a project linked to the trans-Papuan toll road.
-------------