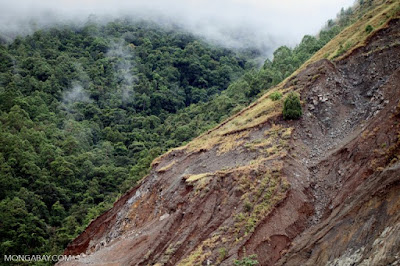 Deforested slopes in the Cyclops Mountains are prone to landslides. Image by Rhett A. Butler/Mongabay.
The government has deployed rescue and evacuation teams and emergency aid to the affected areas, Sutopo said. Several hospitals in the area were also reopened by March 19.
Experts say forest degradation in the buffer zone of the Cyclops Mountains has contributed to the imbalance in the area’s hydrology and ecology.
“Rock digging near the rivers can reduce the soil’s endurance against pressure,” making it more prone to landslides, said Prihananto Setiadji, a geologist at Cenderawasih University in Jayapura.
The environment ministry has called for a review of zoning plans for housing settlements around the Cyclops Mountains, but denies that the area has suffered a massive incursion by loggers.
“There’s no [large-scale] encroachment, because the area is managed by five indigenous communities in a mixed-plantation scheme,” Wiratno, the ministry’s head of natural resources and ecosystem conservation, said in Jakarta. “There are no companies, because it’s a very tough terrain.”
Ministry data show that primary forests in the Cyclops Mountains shrank by 10.5 percent between 2012 and 2017, to 58.4 square kilometers (22.5 square miles). Secondary forest increased by 9 percent during the same period to 23 square kilometers (8.9 square miles). These forests serve as a water catchment during heavy downpours, according to the ministry.
Wiratno attributed the severity of the landslides on the steep slopes in the area. “Even though the forest isn’t degraded, when it’s at a steep angle, coupled with extreme rainfall, it will cause a big impact for the developed [downhill] area there,” he said.
Wiratno said the environment ministry would increase its target for forest and land restoration in Papua to 25 square kilometers (9.7 square miles) from the initial 10 square kilometers (3.9 square miles), and develop efforts to improve soil and water management in the region. The ministry will also deploy a team to investigate the most recent disaster in Jayapura.
“We will collect the facts as accurately as possible, and try to reconstruct the landslide so we can get a more comprehensive picture of what caused the landslide and what were the contributing factors,” said M. Saparis Sudaryanto, the ministry’s director of watershed planning and evaluation.
Houses, office buildings, roads, bridges and public facilities across Jayapura were affected by the disaster. Image courtesy of the Indonesian National Disaster Mitigation Agency.
This story was first reported by Mongabay’s Indonesia team and published here and here on our Indonesian site on March 18 and 19, 2019.
FEEDBACK: Use this form to send a message to the author of this post. If you want to post a public comment, you can do that at the bottom of the page.
Article published by Basten Gokkon
---------