What is happening in West Papua?
Three Indonesian soldiers killed in ambush by separatist rebels 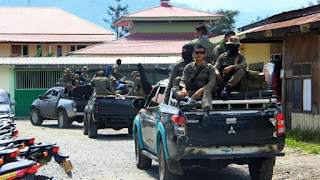 Indonesian security forces heading to Nduga, where construction workers were attacked by rebels in December
Three Indonesian soldiers have died in a violent ambush by separatist rebels in West Papua, as tensions build over a controversial construction project.
Up to ten insurgents were also killed when “a force of 50 to 70 rebels carrying firearms as well as spears and arrows attacked a group of 25 soldiers in a battle lasting several hours”, The Guardian reports.
The troops had been sent to the Nduga district to protect workers building a bridge that will form part of a highway across West Papua, the western half of the island of New Guinea and Indonesia’s poorest province.
It is the latest outbreak of violence linked to the Trans-Papua highway, an ambitious project by the Indonesian government to link West Papua’s port towns to the interior - remote and underdeveloped, but rich in timber and palm oil.
The road’s construction is “spurring violent resistance from Papuan separatists who fear it will lead non-Papuans to exploit and destroy the rainforest they rely on”, says The Wall Street Journal.
Tensions have been stoked further by years of allegations against the Indonesian security forces “of widespread rights abuses against Papua’s ethnic Melanesian population including extrajudicial killings of activists and peaceful protestors”, Channel News Asia reports.
But the conflict between the Indonesian government and its most restive province has even deeper historical roots.
The island of New Guinea was formerly colonised, with the eastern half - now Papua New Guinea - administered by Australia, while the western provinces of Papua and West Papua formed part of the Dutch East Indies.
In 1969, the former Dutch colonies were “incorporated into Indonesia after a widely criticised UN-backed referendum”, Reuters reports.
Half a century later, Papuan separatist groups continue to fight for both independence from Indonesia and unification with neighbouring Papua New Guinea.
One such group, the West Papua National Liberation Army, is believed to have carried out the ambush on Indonesian troops. The same militia launched an attack in December in which 19 highway construction workers “were massacred by the rebels” at a remote jungle camp, Channel News Asia reports.
Indonesian Army colonel Muhammad Aidi has claimed that yesterday’s attack was unprovoked, but a spokesperson for the rebel group said it was a response to Indonesian army abuses, specifically the interrogation of a local man and the torching of five houses.
Despite the outbreaks of violence and the resulting displacement of hundreds of civilians, “President Joko Widodo, who faces an election in April, has vowed to finish the highway project”, says Reuters.
-----------------------------
Posted by AWPA Sydney News at 12:53 PM