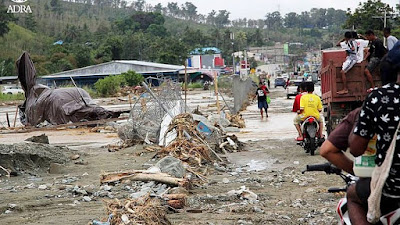 Photo courtesy of ADRA International]
On March 16, flash floods and mudslides hit the eastern Indonesian province of Papua near the subdistrict of Jayapura. Reports are the flood waters left at least 104 dead, 60 missing, 74 injured and displaced more than 4,000 people. Over 350 houses and two main bridges are also reportedly damaged. Additionally, more than 11,700 households in total are affected.
With roadways underwater, getting to communities affected has delayed ADRA aid workers. Currently, ADRA staff and volunteers in local areas have been mobilized to conduct a market survey of available goods and prices.
“The flash floods occurred at night when most of the residents were asleep,” says Ralfie Maringka, emergency response coordinator for the Adventist Development and Relief Agency (ADRA) in Indonesia, a local resident in the country who was deployed on March 17 to help coordinate efforts. “As of now, we are assessing what people’s needs are in the hardest hit areas of Sentani, Japapura, the capital city of Papua Province."
Access to clean water and sanitation, shelter and food are likely to be the most dire needs across the country. The wide-spread flooding may also lead to food shortages in the coming months. It remains unclear how much damage may have been sustained.
"Listening to the people’s needs instead of our own judgment is our priority to helping those greatly affected in this crisis," Maringka said.
More information will be available as it is provided.
ABOUT ADRA
The Adventist Development and Relief Agency is the humanitarian arm of the Seventh-day Adventist Church. Its work empowers communities and changes lives around the globe by providing sustainable community development and disaster relief. For more information, visit ADRA.org.
————————————————
https://en.antaranews.com
2) TNI Commander, Police Chief arrive in Jayapura for work visit
Reporter: Eliswan Azly  8 minutes ago
Jayapura, Papua (ANTARA) - Commander of the Indonesian Defense Forces (TNI) Marshal Hadi Tjahyanto and National Police (Polri) Chief Gen. Tito Karnavian arrived on Saturday in Jayapura for an around six-hour working visit.
The group landed at the Sentani Airport aboard a Hercules aircraft belonging to the Indonesian Air Force and was greeted by XVII/Cenderawasih Regional Military Commander Maj. Gen. Yoshua Sembiring, Papua Regional Police Chief Inspector General Martuani Sormin, Papua Governor Lukas Enembe, and officials within the TNI and Polri.
Information Chief of XVII Cenderawasih Military Command Col. Inf Muhamad Aidi informed Antara in Jayapura that upon arrival at the airport, the TNI commander and his entourage received inputs on the recent flash floods that had hit Jayapura District.
After receiving updates from 172 Military Resort Commander Col. Inf. Binsar Sianipar, the TNI commander immediately reviewed the Mako Battalion 751 to get information from the TNI soldiers serving in the area.
The group then visited the Jayapura Air Base headquarters and continued the work visit to meet the residents of Gunung Merah, Doyo.
During the visit to Red Mountain, the TNI commander and National Police chief will hand over aid to the victims of natural disaster, such as flash floods.
The flash flood that struck on Saturday (Mar 16) led to 105 deaths and some 93 people reportedly going missing.
Some 11 thousand residents fled to various areas considered to be safer to protect themselves from the impact of the natural disaster.
EDITED BY INE