2) Indonesia: Papua Residents Fearful even as Military Presence Grows
3) UK petition calls for West Papua chemical weapons investigation
----------------------------------------
https://www.channelnewsasia.com/news/world/three-indonesian-soldiers-killed-in-fresh-papua-violence-11322172
1) Three Indonesian soldiers killed in fresh Papua violence
07 Mar 2019 09:50PM
JAKARTA: Three Indonesian soldiers were killed in a gun battle with armed separatist rebels in restive Papua province, where over a dozen construction workers were massacred last year, the military said on Thursday (Mar 7).
The soldiers had just arrived in Yigi village in Nduga district on Thursday morning to guard the construction of a bridge when they were attacked by the separatists.
"They were suddenly attacked by a large group, between 50 to 70 people," the military spokesman for Papua region Muhammad Aidi told AFP on Thursday.
"Three of our members died in the attack after getting shot in their chest and back," Aidi said.
The military managed to take control of the situation and forced the rebels to flee.
The body of one separatist rebel was found at the scene.
"We believe between seven to 10 people from their side have also been killed but their bodies had been taken away," Aidi said.
The bodies of the soldiers were flown to a hospital in Timika city, Aidi said.
The military believe the attack was orchestrated by the National Liberation Army of West Papua (TPNPB), which claimed responsibility for the December attack on construction workers at a remote jungle camp, he added.
At least 19 employees of state-owned contractor Istaka Karya were massacred by the rebels when they were building bridges and roads as part of efforts to boost infrastructure in the impoverished region, the military has said.
Indonesia routinely blames separatists for violence in Papua and conflicting accounts are common.
Indonesian security forces have for years been dogged by allegations of widespread rights abuses against Papua's ethnic Melanesian population including extrajudicial killings of activists and peaceful protestors.
Papua shares a border with independent Papua New Guinea (PNG), just north of Australia. A former Dutch colony, Papua declared itself independent in 1961, but neighbouring Indonesia took control of the resource-rich region two years later on the condition it hold an independence referendum.
The subsequent vote to stay part of Indonesia was widely considered a sham. Jakarta keeps a tight grip on the resource-rich region, which experienced several spasms of violence this summer including the killing of three local people, allegedly by rebels.
Source: AFP/gaRead more at https://www.channelnewsasia.com/news/world/three-indonesian-soldiers-killed-in-fresh-papua-violence-11322172
-----------------------------------------------------------
https://www.benarnews.org/english/news/indonesian/indonesia-rebels-03062019145939.html
2) Indonesia: Papua Residents Fearful even as Military Presence Grows
Victor Mambor  Jayapura, Indonesia 2019-03-06
Indonesian security forces stand guard around the village of Yal in Nduga regency, Jan. 12, 2019. 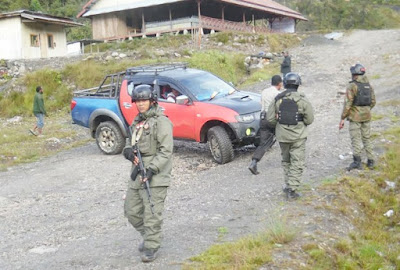 Indonesian security forces stand guard around the village of Yal in Nduga regency, Jan. 12, 2019.
Calm has yet to return to Nduga regency in Indonesia’s Papua province where separatist rebels killed 19 construction workers in December, forcing residents to flee to escape clashes between the insurgents and government security forces, officials and residents said Wednesday.
Soldiers and police launched an operation code-named “Operasi Nemangkawi” to capture those responsible in the killings of workers who were building the Trans-Papua Highway. Regional military spokesman Col. Muhamad Aidi said no arrests have been made.
“We have been focusing on restoring security, protecting citizens and displaced people,” Muhamad said.
Meanwhile, fears abound that more violence could erupt.
“We are afraid to return to our village because there are still soldiers and police,” Usman Lokbere, an Nduga resident who fled to Wamena, the main town in Jayawijaya regency, told BenarNews on Wednesday.
In addition to efforts to capture the suspected killers, the military sent 600 soldiers to Nduga this week to resume the construction of bridges as part of the highway that stretches more than 4,300 km (2,687 miles) from Sorong, the largest city in West Papua province, to Merauke regency, and is scheduled to be completed in 2019.
“The TNI (Indonesian Armed Forces) personnel are currently on their way to Timika, then to Nduga,” said Osman Marbun, head of the Jayapura National Road Development Center (BBPJN).
The soldiers, based in the capital of South Sulawesi province, are to provide security while working on the construction project, according to a military official.
“The 600 TNI personnel will be deployed around the Trans Papua road, between Wamena and Mumugu,” regional military chief Maj. Gen. Yosua Pandit Sembiring said.
The West Papua National Liberation Army (TPNPB), armed wing of the Free Papua Movement (OPM), claimed responsibility for the killings, alleging that the people they killed were soldiers from the military’s engineering detachment, and not civilian workers.
Construction on parts of the highway has been stalled for months, but President Joko Widodo has vowed to finish the project as part of his promise to develop the resource-rich area.
Criticism
Papuan House of Representatives member Laurens Kadepa criticized the military’s move, saying sending reinforcements was not a solution and would only add to the climate of fear.
“Indonesia is being watched closely by the international community, global church councils and even the United Nations due to the ongoing violence in Papua, but the central government still maintains the practice of violence,” he told BenarNews.
“The spotlight (on Indonesia) should have prompted the government to reform security measures in Papua,” he said.
Human rights activist Peneas Lokbere said sending hundreds of soldiers contradicted claims by authorities that security had been restored in Nduga and that residents have returned to their villages.
“If indeed the situation in Nduga is peaceful, why is the TNI sending reinforcements? That will only prolong people’s trauma,” he said.
Nduga resident Raga Kogoya called the decision to send more troops unfair.
“We are only a few, why must we continue to be subjected to security operations,” Raga told BenarNews.
Daniel Kogoya, spokesman for the Nduga Regency Regional Secretariat, said the local government remains focused on providing food and health care to residents who were uprooted from their homes by the violence.
“Many people are still displaced. They have little food to eat and their health is deteriorating,” Daniel said. “Displaced children have been unable to attend classes while exams are approaching.”
Papua is one of the archipelago’s poorest regions despite its rich natural resources. It declared independence from Dutch colonial rule on Dec. 1, 1961, but that was rejected by the Netherlands and later by Indonesia.
In 1963, Indonesian forces invaded the region and annexed it, and six years later held a controversial referendum in which, according to rights groups, security forces selected slightly more than 1,000 people to agree to the region’s formal absorption into the archipelagic nation.
————————————
https://www.radionz.co.nz/international/pacific-news/384159/uk-petition-calls-for-west-papua-chemical-weapons-investigation
3) UK petition calls for West Papua chemical weapons investigation
2:18 pm today
West Papuan independence campaigners are supporting a British parliamentary petition calling for investigations into Indonesia's alleged chemical weapon use in Papua.
Labour MP Alex Sobel last month filed a motion demanding the British government and the Organisation for the Prohibition of Chemical Weapons investigate.
Since then, 22 other MPs have added their names to the petition, which claims there is "sufficient documentary evidence" of chemical weapon use by Indonesia's military in Papua.
The motion said there was witness testimony and journalistic reporting showing Indonesia's military has used "burn-causing chemicals, potentially including white phosphorous".
Indonesia's military and government have described the claims as baseless.
The motion also noted increased Indonesian military and police activity in Papua's Nduga regency, where the security forces are pursuing members of the West Papua Liberation Army.
The Free West Papua Campaign said supporters in the UK can contact their local MP to register support for the motion.
-----------------------