Ratih Hardjono, Jakarta | Opinion | Tue, April 30 2013, 11:05 AM
A- A A+
Paper Edition | Page: 5
This month, the bilateral relationship between Indonesia and Australia received a boost with the second annual 2+2 dialogue, which saw the two countries’ respective foreign ministers and defense ministers sitting down and discussing a variety of issues of common concern.

The Indonesia-Australia bilateral relationship began in 1945, with Australia assisting Indonesia in its attempt to obtain international recognition as an independent nation. Some great Australian names, like that of diplomat MacMahon Ball, were followed by the names of equally great scholars on Indonesia, like Herbert Feith.

The main challenge in the bilateral relationship has been the internal working of politics in both Indonesia and Australia. Australia has been a democracy for more than 100 years, while Indonesia’s democracy is only 14-years-old.

Australia is to have an election this year and Indonesia next year. Elections can be odd times with political promises made to electorates, often at the cost of existing bilateral relationships.

The first major test of the bilateral relationship was David Jenkins’ article in The Sydney Morning Herald in 1986 and it occurred at a time when Indonesia was still under Soeharto’s authoritarian regime and the media were not free.

As a consequence, Jenkins was banned from entering Indonesia and eight years passed before he was able to visit the country again.

There was nothing inaccurate in Jenkins’ report and, in fact, Indonesian historians studying the country’s economic history probably view this as an important article because it reflected Soeharto’s authoritarian approach.

It was a messy undertaking and, as one of the major tests in the bilateral relationship, it remains one that politicians and diplomats on both sides would rather forget.

The year 1999 also marked the birth of Indonesia’s democracy and former president Abdurrahman “Gus Dur” Wahid was at the helm of this first democratic government. Sadly, Gus Dur and his team, which included me, were not prepared for this crucial event in our history.

Indonesian civil society was extremely weak and much too fragmented to meet the enormous challenges of democratization.

Everything that could have gone wrong in the Indonesia-Australia bilateral relationship did! Which is why the second annual 2+2 dialogue this year is so important, marking as it does the attainment of major progress.

There are two crucial questions in the future Indonesia-Australia bilateral relationship. One is Papua and the other is the 2014 Indonesian election. The demand for Papuan independence is an issue with Papuan youths emulating the approach adopted by the East Timorese to gain independence, although the historical context is very different.

The main problem in Papua is that the current Indonesian government has not managed to bring about a better life for Papuans, despite special autonomy that has been in place since 2001.

As happened with East Timor in the 1990s, Australia has become one of the political bases from which Papuans seeking independence are campaigning.

Even so, to some Indonesian political elites, their campaign is seen as a mere pebble in the shoe of
the bilateral relationship.

The second question is the extent to which Australia has considered the possibility of Indonesia’s next president being Prabowo Subianto, a former Army general linked to past human rights violations. The various political polls about the level of his popularity may be wrong, but his being democratically elected remains a possibility.

There are 67 million new voters out of the total 175 million Indonesians entitled to vote in the 2014 election. These new voters have no political baggage about Prabowo and the events of 1998, as they were mostly below the age of 5 when reformasi began.

These first-time voters have, instead, grown up in the 10-year period of President Susilo Bambang Yudhoyono’s administration and have serious misgivings about the latter. Just look at the recent fiasco of the national examinations involving our young people, which points to the fact that President SBY has not really focused on education or youth employment.

Life is tough for the average 19-year-old Indonesian. Prabowo, on the other hand, has started to campaign on the distribution of Indonesia’s economic growth. More importantly, whether we like it or not, he has managed to give hope to many young Indonesians.

At this stage, however, these are mere words and he still needs to prove himself.

How well do we understand each other? Are we ready to move ahead, given that over the past 10 years there has been a 40 percent drop in the number of Australian students studying the Indonesian language?

Yet, there are approximately 20,000 Indonesians studying in Australian universities (The Jakarta Post, March 19). Is there enough public understanding in Australia of the problems with democratization in Indonesia?

Do Australians realize that we Indonesians still have a long journey ahead of us in ensuring that the democratization process continues?

Anything can happen in the 2014 Indonesian election; as it did in 1999, when Gus Dur was elected president to the surprise of many, including some in Australia.

The question that people from both sides of the Arafura Sea need to consider is the extent to which the bilateral relationship is sustainable in the face of the political earthquakes that could disturb it.

At this stage, in view of the valuable progress already made, let us keep both feet on the ground. 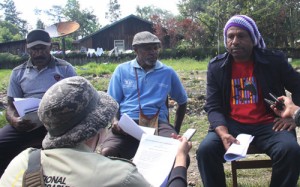 However, different from the view point of the Papuan Customary Council Balim (La Pago), where the view DAP Balim that two official statements that have a strong argument that the government of the Republic of Indonesia stated that the integrity of the Unitary Republic of Indonesia to Papua is legitimate, and the people of Papua declared that May 1 1963 was the annexation / early occurrence of human rights violations in Papua. This was confirmed Chairman of the Papuan Customary Council Balim (La Pago), Mabel Lemok when held a press conference at the Office of the Tribal Council, Wamena, Tuesday (30/4).

According to him, the Papuan people claim that the integration of May 1, 1963 was illegitimate, while the government said it was legal. According to the people of Papua, the integration of May 1, 1963 was the beginning of an offense and the offense is not ended to this day is still ongoing, so that the people of Papua said on May 1, 1963 was the annexation or human rights violations.
"In essence, the government says that if legitimate, why to this day is often a violation of human rights. Until today the people of Papua are still in poor condition, that was very real marginalization, of the development process, the process of alignment so the Indonesian government is not truly constructive Papua, "said Mabel Lemok.

Admittedly, if it is a legitimate government to build integration, meaning the government must establish the Papuan people correctly and fully. Though the people of Papua for 50 years has yet to feel the full development and is seen and the real human rights violations and the suppression of democracy.
"If it is said to integration, why to this day people still in rebellion. Until now the government's policies after the Act and the Act and the establishment of districts in Papua province was legally flawed in terms of rules, "he said.

Meanwhile, according to the Secretary of the Papua Customary Council Balim (La Pago), Julian Hisage, the government must open up to the people of Papua to conduct dialogue between Papua and Jakarta.
"Sit down together and have a dialogue is the only one who wants this in commemoration of May 1," said Julian Hisage.

On the other hand, DAP recluse Balim Coordinator (La Pago), Theo Hesegem asserted, warning May 1 has reached 50 years, and that means the people of Papua deem it an annexation.
"May 1 for our nation of Papua, we would not say to a matter of eating and drinking, because the matter was already done for the Special Autonomy for 9 years that its implementation does not exist, let alone have UP4B, we refused. We want a dialogue between Papua and Jakarta, "he said.

In that case, the Papuan Customary Council Balim wise government wants to open up a space for a dialogue between Papua and Jakarta.
Additionally, DAP memita honestly admit that government policy mistakes and violations that continue to occur until now, the government can implement democracy under the applicable laws in the Land of Papua, as well as to local authorities, religious leaders, NGOs, academics and indigenous Papuans are not silent and lazy to know the conditions are getting worse for the people of Papua. (Jubi / Islami)
Posted by AWPA Sydney News at 2:13 PM