On the Global Day of Action on Military Spending (GDAMS) on April 15, a demonstration was held in  Broadway outside Health Minister Tanya Plibersek’s office  to highlight the government’s appalling waste of money on the military.
In cities around  and in over 100 centres world wide, demonstrations are being held to mark GDAMS which coincides with the publication by the Stockholm International Peace Research Institute of world military expenditures for the past year.

Anne Noonan also of AWPA (Sydney) said Many Australians did not realize that Australia helps fund and train the Indonesian military and in particular Detachment 88 which is Indonesia’s counter-terror unit. Detachment 88 was set up after the Bali bombing to target terrorists’ organisations in Indonesia. However Detachment 88 is also being used in West Papua to target West Papuan activists and human rights defenders involved in the self-determination struggle and is way outside their brief. 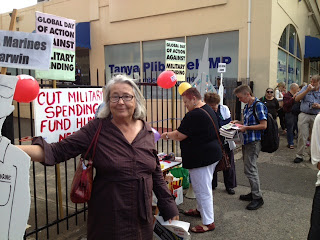 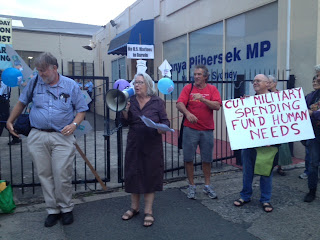 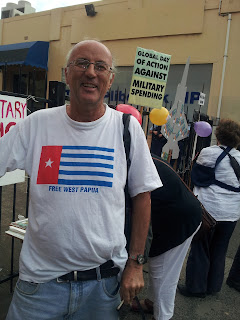 Posted by AWPA Sydney News at 2:27 AM