1) KNPB Commemorating May 1 at the Tomb of Alm. Theys

A google translate of article in Bintang papua.Be-aware that google translate can be a bit erratic. Original bahasa at
http://bintangpapua.com/index.php/lain-lain/k2-information/halaman-utama/item/4044-knpb-peringati-1-mei-di-makam-alm-theys 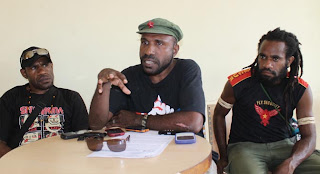 KNPB also assess the Papua Police statement, Irjend. Pol. Drs. M. Tito Karnavian, MA, and Commander XVII / Cenderawasih, Maj. Drs. Christian Zebua a very provocative statement for the people of West Papua nation ahead of the May 1, 2013. "We strongly deplore the statement of Commander in Chief and the mass media, based on our assessment (KNPB) was deliberately made to preconditions for the people that can not do anything - anything, the people of West Papuans feel terrorized by the statement - the provocative statement later before May 1 , "said Chairman of the KNPB, Viktor Yeimo accompanied Spokesperson (Spokesperson) KNPB, Wim R. Medlama and 1 other KNPB members, when it held a press conference, at Café Prima Garden Abepura, yesterday afternoon on Wednesday (24/4) at around 13:00 CEST.

Viktor said Papua Police statement that says there are a few critical points as a warning to watch out for May 1, while the statement of Commander, which do not exist groups - groups that want to create additional movement. Where, two statements from high-ranking Homeland Security officials at the nation's West Papua is an emotional statement and it was terrorizing inner, mental as well as scare - scare the people of Papua to commemorate 50 years of occupation by colonialism Homeland for West Papuans.

Affirmed, KNPB still trying to straighten out the true history and the fact that the colonial occupation of Homeland entrance onto West Papuan homeland is illegal. "For 50 years we the people of West Papuans living under pressure and oppression of colonial Repbulik Indonesia (RI), even it did not ever want to invite the Republic of Indonesia (RI) to set foot on the ground water of the West Papuans," he said .
It is said, all the people who live in the West Papua knowing that May 1 is the day of the annexation or 50 years of illegal occupation of the People's Homeland colonial West Papuans. And, the moment it is often celebrated May 1st Nations people of West Papua as early suffering and oppression of colonial Indonesia.

"Even 50 years old (May 1, 1963 s / d May 1, 2013) the length of the West Papuan people living marginalized, marginalized, cornered, isolated, oppressed and trapped in the chains of colonial rulers and the people of Homeland Homeland (Non Papua, red) above ground water West Papuans belong, so it's time the people of West Papua nation should celebrate May 1 as a form of torture and oppression of the colonial government of Indonesia to the West Papuans within half a century, "he explained.

That is, the former spokesman (spokesperson) KNPB revealed, on May 1, 2013, the KNPB Nations call upon all the people of West Papua both within and outside Papua in order to make the moment of May 1 as a day of mourning (mourning, red) for Nation National West Papua to commemorate this way in the form of peaceful protest, free speech and worship celebration with prayer. "We appeal to the people of KNPB West Papuan not to be provoked by the threat of intimidation and terror - terror perpetrated by the colonial army of the Republic of Indonesia (RI) in this case the military or the police," she said.
In addition, Viktor also appealed, on May 1, 2013, so that the people of West Papuans to stop any kind of schooling and tuition as well as offices and other business activities, because May 1 is a moment to mourn, reflect, recognize and interpret for 50 the people of West Papuans are suffering and oppression within the confines of the Republic of Indonesia to be done in the hostel - the dorm, in the residential population, churches and mosques and places - other places.

In this action, Viktor said, still will do it peacefully without disturbing the activity of the other community. And, if there is the Indonesian military (TNI / police) who dare to be lowered to stop the implementation of the May 1. Then KNPB will not be afraid because the slightest moment of May 1 this is the most historic moment for the nation should be commemorated by the people of West Papua, and that activity would be focused KNPB to celebrate, in the tomb of Theys Hiyo Eluay, Sentani - Jayapura. "We will never be afraid at all, if the police want to search for us to catch and kill as experienced by Alm. Mako Musa Tabuni. Thus KNPB mempersilahkannya and will not prohibit the police to do so. Where, we are also ready to die for the West Papuan struggle to be free from colonial kunkungan Homeland, "said Viktor again.

Jayapura-Papua police would forcibly disperse, when appears the demo without a permit or force do a demo, ahead of the half-century anniversary or 50 year return of West Irian into the lap of the Republic of Indonesia (Republic of Indonesia) are often celebrated every May 1st.
Head of Papua Police spokesman Sr. (Pol) I Gede Sumerta Jaya, SIK is confirmed in his office, Wednesday (24/4).
He explained that the police activity ahead of the May 1 does not involve a great power or standby first, but increasing security routine and order in the territory of Papua and West Papua as it pertains to the National Education Day, as well as ahead of the International Day of Hunting
UN announcement.

"Actually, yes please just society activities as usual is not the day to be scared," he said.
Because of that, he said, if there is a demo or express opinions in public in accordance with Law no permission if we have a professional humanist and forcibly dispersed by conditions or in ways that already exist in the SOP or SOP based on the existing Police Regulation.
Is May 1st a warning ahead of the existing parties to submit a demo license Papua Police, he said, it did not know it. But if there will be certain groups there asking permission related protests or demonstrations May 1 for any reason, then the police would not give permission. Because during this demonstration conducted by certain groups or content of the demo material violation of or not in accordance with such laws violate the provisions of the Criminal Code on treason or do things that could spark ignited hostilities or national divisions.

"For that we will not give permission, and we will ban to rally or demonstration. Once again we will not explicitly allow, "he said.
He said it did not need to see the letter because this matter is clear during demonstrations or rallies always violate always yelling things that are not in accordance with Law No. 21 Year 2001 on Special Autonomy. Sentences that are implicit in the Act that all mengkait with Homeland.
Article 1 is the Papua province of Irian Jaya Province are given special autonomy within the framework of the Homeland. Article 2 of the Papua Province as part of the Homeland use the Red and White as the state flag and the national anthem Indonesia Raya.
Point flashpoints will do routine security, he added, it claimed there are groups that may be regarded as opposite thoughts with Homeland in Puncak Jaya, Lanny Jaya, Paniai, Mimika, Manokwari and others. But it did not hold a large force, because it considers routine.
Is this routine also involves the military, according to I Gede, see how it goes because of safety concerns. That security is not only the responsibility of the police, but it
is a shared responsibility of both military, government and society. Only problem domain police investigation. But the security issues are the responsibility of all parties.
Just a note, the return to the bosom of Homeland Papua on 1 May 1963 handed over West Papua to Indonesia from the United Nations Temporary Executive Authority (UNTEA) through an agreement. (Mdc/don/l03)

Wim Medlama (IST)
Jayapura, 25/4 (Jubi) - West Papua National Committee (KBPB) will go down the road to mark 50 years pejajahan Indonesia over Papua on 1 May 2013. 50th anniversary will take place in all regions of Papua, Papua and Foreign beyond. Jayapura region will be centered on Tiananmen tomb of Theys Eluay, Sentani, Jayapura regency.

"50 years is even Indonesia occupied Papua land illegally, then KNPB as the media, but we will do a peaceful demonstration to commemorate last May 1, 1963 since the colonial Indonesia invaded West Papua and Papua whole land," said a spokesman KNPB center, Wim Medlama to tabloidjubi.com in Abepura, Jayapura, on Thursday (25/4).

According to him, to meet the requirements of Indonesian democracy in the country, sent a letter of notification will KNPB celebration to the safety of the police. "We will enter a notice in accordance with procedures applicable laws in this country to the Police. And in principle, KNPB going down the road, "he said.

He added, in a later action, it will convey three aspiration. First, straightening menyeruhkan history of Papua's integration into the Republic of Indonesia. Secondly, before the rectification of history, government Indoneia stop development in Papua. Third, demanding a referendum. "Back to the rectification of history and stop the implementation of the construction on the land of Papua to cause any form of illegal construction, we demanded referendum," he said. (Jubi / Mawel)