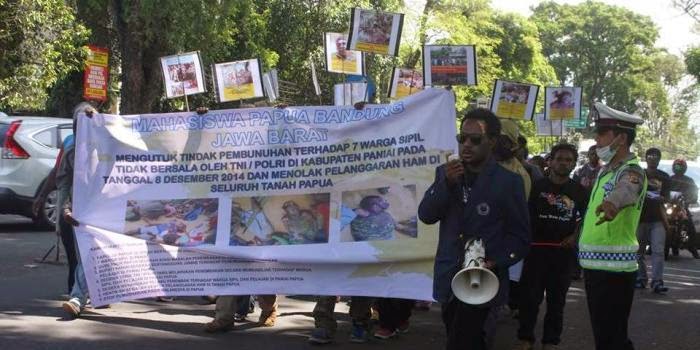 The action of the students in the soup in Bandung. Photo: Jackson Ikomou

Jakarta, STEP MAGAZINE - In order to celebrate Human Rights (HAM) globally in several places throughout Indonesia held a peaceful rally simultaneously with the demands asked Jokowi-JK thoroughly investigate cases of human rights violations that occurred in the land of Papua.

Undertaking action, Maikel Yeresitou say socio-political dynamics that occurred from 1961 to 2014 in which the people of Papua in perhadapakan with various threats, rape murder in every city district in Papua and West Papua. State never appreciate the Papuans in berbangasa and state aspects of life, because it is not serjalan with the ideals of the founders of this nation as required by law.

In this action they also urged the governor of Papua Commander, Chief of Police, the parliament, and the National Human Rights Commission, the Church immediately to Paniai to conduct investigative khasus human rights violations and prosecute the perpetrators through civil mahkam.

Jokowi Kabesma also asked the president to investigate the issue of human rights in West Papua. "Students and citizens are very disappointed with peresiden Jokowi, for human rights violations in Paniai district that killed personnel and civilians on the eve of this Christmas day".

Action in Jayapura received first assistant Papua province, he said, the incident in Paniai become common problems, as well as the investigation team will soon visit Papua. Said Assistant 1, as a native son of Papua, he and the governor does not want any bloodshed so that the future will encourage the formation of a special agency to highlight the murder. The agency, he said, will involve all components of NGOs, religious with the safety objectives of the Papuans.

KNPB and PRD Region Manokwari urged the Indonesian government to take responsibility for the injustices that occur in Paniai date, 7 to date, December 8, 2014.

Secretary General of the Regional Parliament of Manokwari Rafael Natkime said December was a funeral for Papuans. He said, "Truth be killed but can not be defeated".

Bandung: Papuan Students who are members of Solidarity for Papua (SUP) held a peaceful demonstration in front of the Sate, Bandung, West Java.

In his speech, one of the orators said to coincide with the Human Rights (HAM) Se-World, Papuan students back down the road to menyapaikan Indonesian military atrocities throughout Papua, especially special shootings carried out by the combined forces brutally killed in Paniai 6 civilians and dozens of others were hospitalized.

We condemn the actions of the Indonesian military forces against civilians in Paniai Papua who shot dead five civilians and wounding dozens of others. It is, very unprofessional in their duties, as a state, "said spokesman Mark Medlama. 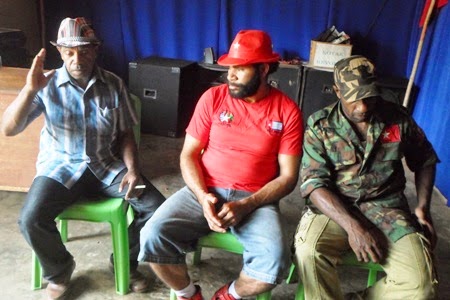 Merauke, Jubi- West Papua National Committee (KNPB) Merauke strongly condemned the shooting by the officers in the army / police against civilians in Paniai a few days ago. The act of shooting it is a form of gross human rights violations committed.

The assertion was made Chairman of the Regional KNPB Merauke, Gento Emerikus DOP while giving a press conference to reporters at the Secretariat KNPB-Coconut Five on Wednesday (10/12). "We ask the Papua Police Chief and Commander should be fully responsible for the act of shooting by the security officers," he said.

Asked whether the later KNPB will conduct further investigation of the shooting of civilians in Paniai, Gento said, they have a clear line of command that is from the center. Where, of course, have to get referrals in advance of Jayapura. "We do not immediately take action," he said.

Reaffirmed, a shooting incident ways inhumane and was condemned by the KNPB. "Once again, we strongly condemn the presence of the shooting," he said again.