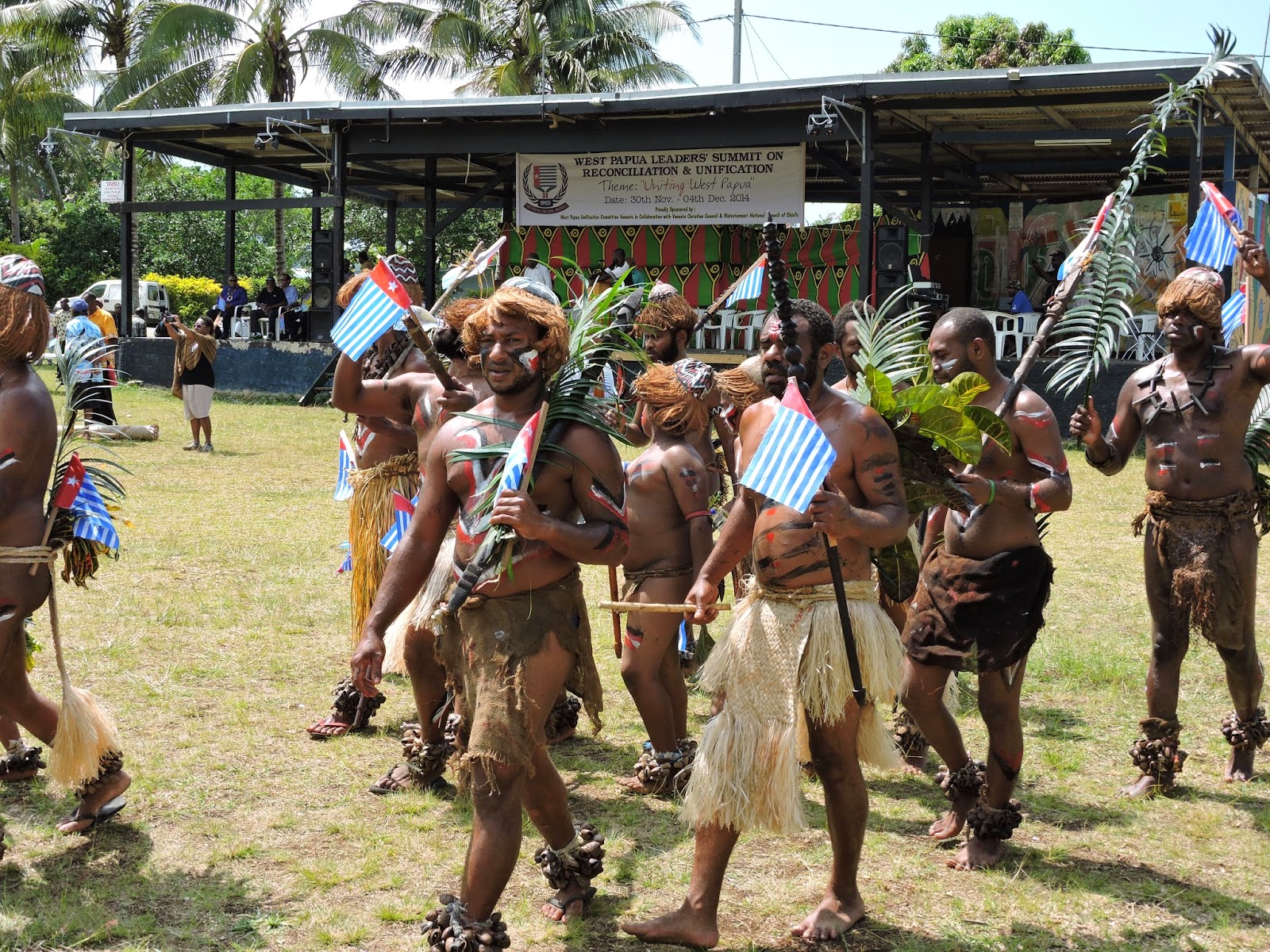 West Papua Leaders ‘Summit on Reconciliation and Unification in Vanuatu
At a historic meeting of West Papuan leaders in Port Vila, a new organisation called the United Liberation Movement for West Papua (ULMWP) was formed. The new organization will re-submit a fresh application for membership of the Melanesian Spearhead Group (MSG). The groups who have united include the Federal Republic of West Papua (NRFPB), National Coalition for Liberation (WPNCL) and the National Parliament of West Papua (NPWP). An external secretariat consisting of five elected members from the various groups will co-ordinate the ULMWP activities. Octovianus Mote has been elected as General Secretary, while Benny Wenda is the spokesperson and three other elected members are Jacob Rumbiak, Leone Tangahma and Rex Rumakiek. The meeting was moderated by the Pacific Council of Churches. The “West Papua Leaders ‘Summit on Reconciliation and Unification” was in response to the MSG leaders inviting all West Papua groups to form an inclusive and united umbrella group to work on submitting a fresh application for membership after their (MSG) special summit in Port Moresby in June 2014. Events in Vanuatu began on the 30 November with a welcome ceremony and ended on the 5 December. An article by Ben Bohane on the meeting at
http://pacificpolitics.com/2014/12/west-papuans-unite-to-form-new-umbrella-g
There was excellent local media coverage on the weeks events in Vila which shows the support the Vanuatu people and all political parties in Vanuatu have for West Papua. http://awpasydneynews.blogspot.com.au/2014/12/some-of-local-media-coverage-in-vila-in.html On the 1st December an inspiring march to celebrate West Papuan National Flag Day took place along the main Street of Port Vila .Photos at http://awpasydneynews.blogspot.com/2014/11/photos-1st-dec-port-vila.html
http://awpasydneynews.blogspot.com/2014/12/port-vila-ist-dec-more-photos.html

1st December events
Its now fifty three years since the Morning Star flag was flown officially for the first time on the 1st of December in 1961. The West Papuan people continue to raise their flag as an act of celebration but also of protest against the injustices they suffer under Indonesian rule. They can face up to 15 years jail for doing so. This year solidarity groups around the world (and in West Papua) raised the West Papuan flag in support of the people of West Papua. The flag was raised in the majority of capitol cities in Australia and New Zealand. In Melbourne the Indonesian consulate tried to stop Federation Square holding a West Papuan event but was refused because Federation Square is supportive of all cultural groups, and cannot prevent members of the public wearing whatever they want and raising their own flags.
In Sydney a rally was held at the Town Hall Square and Indonesian Consulate. Two councils in Sydney in the past have raised the flag on their Town Halls, Leichhardt and Marrickville Councils. This year Leichhardt Council did not grant permission (OH&S concerns). However, on the 28 November Jamie Parker MP member of the NSW Parliament met with West Papuan representative Octo Mote and supporters at his office in Glebe to show support. http://awpasydneynews.blogspot.com.au/2014/11/jamie-parker-mp-member-of-nsw.html
AWPA would like to thank the Mayor of Leichhardt Cr Rochelle Porteous and Jamie Parker who also held the flag up outside Leichhardt Town Hall in a show of their support on the 1st December. AWPA Newcastle reported that the Newcastle City Council again flew the flag on their Town Hall. The Warrnambool South Western Victoria group raised the flag, the event making the local paper, The Warrnambool Standard.
Shooting of civilians by the security forces in Paniai
On Monday the 8 December security forces opened fire on a group of civilians which included women and children in Enarotali in Panai regency.  Five young people were killed and up to twenty injured, many requiring treatment in hospital. The incident started the previous evening when members of a special team attached to Army battalion 753 assaulted a 12-year- old after a group of children and young people told the occupants of a patrol car to turn on its headlights as it passed the group. The children were decorating a Christmas tree/cottage in Enarotali.  The patrol car returned with Indonesian soldiers who chased the group and assaulted one of the children, Yulianus Yeimo beating him with rifle butts. The next morning hundreds of local people gathered on Enarotali’s Karel Bonay football field in front of the local police station demanding an explanation. The police ordered the protesters to disperse and then struck them with batons when they refused. The incident escalated resulting in the security forces firing into the crowd. Solidarity groups, NGOs including Human Rights Watch and Amnesty International are calling for an independent and impartial investigation into the killings and the excessive use of force by the Indonesian security forces. West Papuans are demanding an independent inquiry into the Killings. In a joint press conference in Jakarta with Sihol Manullang, chairman of the Jokowi for President Volunteers’ Front, the Rev. Neles Tebay of the Papua Peace Network said an independent team would shed light on what truly happened at Monday’s incident. “Members of [the team] must come from outside of the National Police and the military,” Neles said. “Only an [independent] team can subdue the Papuan people’s rage at the moment.” The UN Human Rights Office also expressed concern at the killings stating it has “been concerned about regular reports of violence in Papua in the last few years” and urged authorities to “facilitate an independent and thorough investigation” into the incidents. How President Joko Widodo responds to this incident will indicate how seriously he is trying to solve the issues of concern the West Papuan people have. AWPA release at    http://awpasydneynews.blogspot.com.au/2014/12/media-release-west-papua-5-civilians.html

KNPB- 6th anniversary
The 19 November was the 6th anniversary of the West Papua National Committee (KNPB) which was formed on the 19 November in 2008. Rallies were held in a number of areas in West Papua to celebrate the anniversary and in support of the International Lawyers for West Papua (ILWP) meeting in the Netherlands. In Moenamani, the capital of Dogiyai sub-district in the Papuan central highlands, one demonstrator was shot in the leg after security forces broke up a KNPB demonstration and 11 KNPB members were arrested.  In addition to the arrests, police also seized KNPB flags and other material evidence. The KNPB has been targeted by the security forces because of its ability to orgainse large rallies bringing international attention to the situation in West Papua. On the 13 October 46 West Papua National Committee (KNPB) members were arrested  (29 in Merauke and 17 in Jayapura) when they held rallies calling for the release of the two French Journalists. Papuans behind bars reported that 28 KNPB members in Nabire, Dogiyai and Kaimana were arrested and suffered ill-treatment by Indonesian police during their activities celebrating the 6th anniversary of the of the KNPB. Papuans behind bars November update at  http://www.papuansbehindbars.org/?p=3359

PNG to integrate West Papua refugees
RNZI 6 November 2014
The PNG foreign minister, Rimbink Pato, says West Papuan refugees will be issued a PNG passport or certificate of identity. Mr Pato says the process will happen over the next 12 months and will be assisted by the United Nations High Commissioner for Refugees. He says most West Papua refugees have already met the requirements for PNG citizenship and the government will waive the application fees. Tens of thousands of West Papuans have fled the Indonesian-controlled provinces bordering PNG, with many having lived in makeshift refugee camps for decades. Mr Pato says those asylum seekers held by Australia in its Manus detention centre who get refugee status will be given training in English, Tok Pisin and PNG culture. He says non-refugees will be required to leave PNG either voluntarily or through deportation.

Komnas HAM: Jokowi Needs a Palace in Papua
Jakarta Globe/. By Farouk Arnaz Dec 04, 2014
Jakarta. The National Commission on Human Rights (Komnas HAM) is urging President Joko Widodo to build a palace in Papua, so that he can be closer to the people and soothe separatist sentiments in the remote region. “We encourage [the president] to immediately establish a presidential palace for the Papuan people,” Komnas HAM commissioner Nurcholish told a discussion held at the National Police headquarters in Jakarta on Thursday. According to Nurcholish, the plan for a presidential pied-a-terre in Papua would greatly improve the prospects for peace. Since Papua became part of Indonesia in the 1960s, a low-intensity guerrilla war has been waged against the central government, most notably by members of the Free Papua Organization (OPM).
Papua and West Papua remain among the nation’s least developed provinces, even as they are among the richest in terms of natural resources.
The Indonesian president already has a number of official palaces at his disposal. Apart from the State Palace in Jakarta, for instance, there are palaces in Bogor and Cipanas (both in West Java), in Yogyakarta (Central Java) and in Tampaksiring (Bali).

More migrants and division of West Papua will only increase tension
http://awpasydneynews.blogspot.com.au/2014/11/media-release-more-migrants-and.html

Rallies to be held in West Papua for 6th anniversary of the KNPB.
http://awpasydneynews.blogspot.com.au/2014/11/media-release-rallies-to-be-held-in.html

Transmigration Is the Last Thing That Papua and Its People Need
http://thejakartaglobe.beritasatu.com/opinion/transmigration-last-thing-papua-people-need/