1) Doubts over investigation into Papua shooting

1) Doubts over investigation into Papua shooting

Share on Twitter Share on Facebook Share on Google Plus Share on Reddit Share via email
Indonesia police say a total of 53 people are being questioned over the fatal shootings of at least five young civilians by security forces in Papua earlier this month but there are doubts about the credibility and impartiality of the investigation.
Papua Police spokesman Patridge Renwarin says witnesses include civilians, soldiers and police.
The Jakarta Globe reports that he told the Antara news agency the national police are questioning their officers and the TNI was conducting its own investigation into possible involvement of its soldiers.
The announcement comes just days after President Joko Widodo told a crowd in Papua that the civilian killings were deplorable and he wanted the case solved immediately.
Human Rights Watch Indonesia has called on Mr Widodo to form a joint fact-finding team to ensure a credible, impartial investigation into the deadly shootings.
It says the National Commission on Human Rights, or Komnas HAM, police and military should all be involved.
Komnas Ham is conducting its own inquiry into the incident, but the military has refused to cooperate and Human Righs Watch says Indonesia's military law prevents civilian investigators from speaking with military personnel at the scenes of crimes.

2) No Smelter Construction in Sight, Govt Warns Freeport
Zoom Out Zoom In Normal
TEMPO.CO, Jakarta - The government sent a warning to PT Freeport Indonesia, reminding the US-based miner to immediately set the locations for its smelters. To date, the Government has yet to see any sign that Freeport is keeping its promise to build smelters in Gresik and Papua, and complete the construction in 2017.
"The warning letter was sent on Monday, December 29th. The due date is January 25, 2015," said Sukhyar, director general of mineral and coal at the Ministry of Energy and Mineral Resources. In addition to reminding the miner about their smelter promise, the government is also asking Freeport to provide their biannually evaluation report.
Sukhyar said that if Freeport fails to constrict the smelters, their export license will continue to be detained. The mining company will be allowed to resume exports if the smelters are 60 percent done by February 2015.
Freeport Indonesia president director Rozik Soetjipto said the smelter construction process has reached the stage of technology studies. The company has not determined the location for the smelters in Gresik and Papua. "We are not sure [where] yet. Land permit process also takes a long time," he said.
URSULA FLORENE SONIA | AYU PRIMA SANDI
---------------------------------- 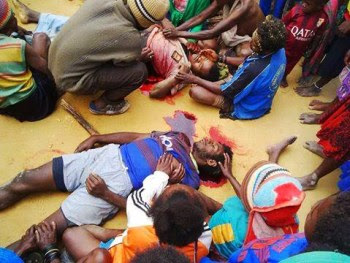 Five West Papuan youth, age 17-18, were massacred by Indonesian military and police, who shot into a crowd of protesters Dec. 8. They were protesting an incident the night before, when younger children were beaten and a 12-year-old tortured for complaining that a military vehicle was being driven with its headlights off.My heart filled with grief and sadness when at least five of my people were brutally massacred by the Indonesian military and police in West Papua on Dec. 8, just for protesting against military violence against children. Torturing and killing children is a crime against humanity, and those responsible must be brought to justice.

My heart filled with grief and sadness when at least five of my people were brutally massacred by the Indonesian military and police in West Papua on Dec. 8, just for protesting against military violence against children. Torturing and killing children is a crime against humanity, and those responsible must be brought to justice.
Alpius Youw, Alpius Gobai, Saday Yeimo, Simon Degei and Yulian Yeimo were all boys aged between 17 and 18 and were all shot dead by the Indonesian military yesterday in Paniai. This horrific tragedy occurred when the Indonesian military and police mercilessly opened fire upon a crowd of people, mostly youths and children who were demonstrating against the torture of another 12-year-old boy by Indonesian soldiers.
There is absolutely no excuse for the cold blooded massacre of between five and 12 innocent boys and I want to say that I fully condemn this evil human rights atrocity. How can the Indonesian government ever defend its position in West Papua while it continues to massacre my people, even children, just for speaking out against military brutality?

There is absolutely no excuse for the cold blooded massacre of between five and 12 innocent boys and I want to say that I fully condemn this evil human rights atrocity.

Events such as this horrible day of bloodshed in Paniai reveal to the world exactly what the Indonesian government is to this day doing in West Papua. Recently I was interviewed by BBC Indonesia and I declared that I do not trust the new Indonesian president Joko Widodo (Jokowi) and do not believe that he will bring any positive change for my people. 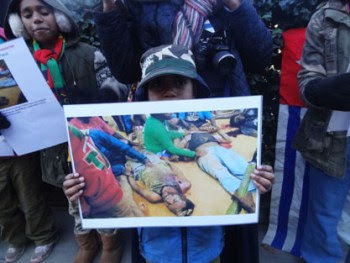 Outside the Indonesian embassy in London on Dec. 13, the Free West Papua Campaign and British friends protest the Dec. 8 massacre of West Papua youth
This heinous massacre against the Papuan youth is exposing Jokowi’s lies to the world and is proof that he is continuing to murder the next generation of my people just like former Indonesian presidents have done, with no regard whatsoever for our human rights.
With so much evidence coming out of West Papua every day, the world cannot remain blind to my people’s suffering while my country is under illegal occupation and my people, including children, are being viciously massacred by Indonesian soldiers. We will not be silent.
I am calling upon the international community to condemn this act of extreme terror towards my people who were only protesting against military brutality. Please look at the reality of what is really happening to my people. Men, women, children – all of us are being killed like flies in our own country by an occupying Indonesian army.
I ask all supporters and friends including human rights organizations, NGOs and church groups to also fully condemn this massacre of boys and children in Paniai. Please share and widely publicize this atrocity so as to increase worldwide awareness about the genocide in West Papua.

I am calling upon the international community to condemn this act of extreme terror towards my people who were only protesting against military brutality.

Please help to lobby politicians to support my people in breaking free from the Indonesian military occupation by supporting us in our struggle for self-determination and independence. You can send this letter to your political representatives and ask them to support media freedom and self-determination in West Papua. My people are in desperate need of voices to report the reality of this genocide we are facing every day. 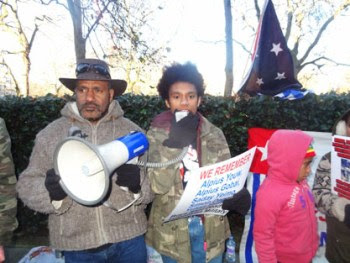 Benny Wenda leads the protest in London. Wenda is a West Papuan independence leader and international lobbyist living in exile in the U.K., where he was he was granted political asylum in 2003 by the British Government following his escape from custody while on trial in West Papua.
On behalf of the Free West Papua Campaign, I give my full and deepest condolences to the families of all those ruthlessly murdered in the Paniai massacre. Their loved, their youths and children died protesting for all our rights, so that freedom and justice will one day come to our people as a whole.
The victims of this terrible day will be remembered in the history of West Papua forever along with the other hundreds of thousands of innocent Papuans who have died in our freedom struggle. May they rest in peace.
Having just returned from Vanuatu, where I have been attending a reunification conference for all West Papuan independence leaders, I have great hopes for West Papua’s freedom struggle. But such massacres as these cause great pain for all Papuans, showing us the urgency of our people’s quest for the liberation from this violence and illegal occupation.
It is for this reason that I am writing these words as a cry for help. Please see the suffering of my people and take action to help us. We are desperately in need of international support to help us find true peace and freedom in our own country.
Please support my people in our peaceful struggle against these horrors of colonialism and genocide. We want our rights to be restored and our justice granted. We want a free West Papua.
Benny Wenda, founder of the Free West Papua Campaign and spokesperson for the United Liberation Movement for West Papua, can be reached at office@bennywenda.org. Learn more at www.bennywenda.org andwww.freewestpapua.org.