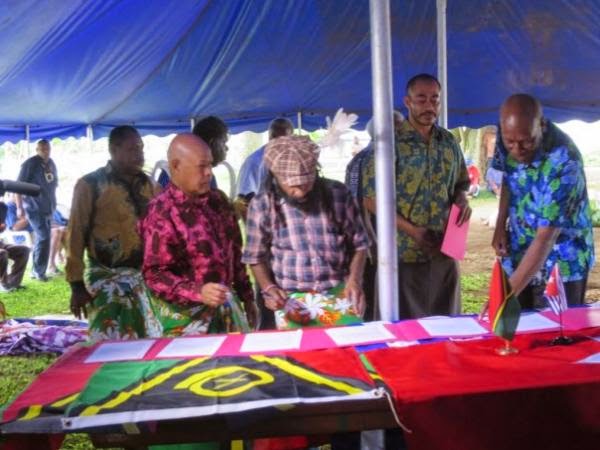 MANOKWARI, SUARAPAPUA.com --- Merging of the leaders of the factions of political struggle Papua in Saralana, Port Villa, Vanuatu, is a step forward in the legal process of political problems in Papua according to law and political mechanisms adopted by the United Nations (UN) today.

This was conveyed by the Executive Director of the Institute for Research, Pengkajiaan, Reporting, and Legal Aid (LP3BH) Manokwari, Papua, in a press release sent to the editor suarapapua.com, Monday (08/12/2014) afternoon.
Warinussy also expressed high appreciation to Dr.Rex Rumakiek of West Papua National Coalition for Liberation (WPNCL), Edison Waromi of State of the Federal Republic of West Papua (NRFPB), and Buchtar Tabuni of the National Parliament of Papua Barat (PNWP) who have attended and the declaration signed an.
Wherein, said Warinussy, the three leaders are already represented warring factions that have been fighting alone inside and outside Papua, and has now been united through the signing of the declaration Saralana, and spawned a national political entity called the United Liberation Movement for West Papua (ULMWP) or Unity movement for the Liberation of West Papua.
"ULMWP in daily operationalization will be led by Octovoanus Mote as the Secretary-General and assisted by Benny Wenda as spokesperson, and members consisting of Jacob Rumbiak, Rex Rumakiek and Leoni Tanggahma."
Warinussy urged the leader of the political struggle of the people's organizations in Papua and abroad to support the full ULMWP under the leadership of Mote to run a political mandate, to encourage verification and preparation to the Melanesian Spearhead Group application, also filed in the state under the Decolonization Committee of the General Assembly UN.
"I personally rate under your placement ULMWP Mote as Secretary General is a good choice on the basis of his background as a former journalist and researcher at Kompas Daily Newspapers."
"Similarly brother's election as Speaker of Benny Wenda is an option that is very proportional, because the appropriate role that has been played in international fora in the fight for the right of self-determination for the people Papuu," said senior lawyer.
Coupled with the election of a senior diplomat DR. Rex Rumakiek ULMWP as one of the members, with Jacob Rumbiak and Leoni Tanggahma, said Warinussy, even more strengthen diplomatic efforts to push towards the peaceful settlement of the issue of self-determination demands of society in Papua over the years.
"May all factions struggle, including TPN PB honor agreements contained in the Declaration Saralana, and the duty ULMWP to establish intensive communication with all factions and disseminate the agreement to all levels of people in Papua and in international fora," he said.
"Including ULMWP diplomacy in charge of building all the various parties, and continues to build commitment and good relationship with the Government of Vanuatu who have actively and without pause continued to provide support for the struggle for the enforcement of the political rights of the people of Papua since 1980 until today," lid Warinussy.
Previously, as this news was written, the results of the symposium in Port Villa, Vanuatu, has set a new political entity called the United Liberation Movement for West Papua (ULMWP). (Read: This results in Vanuatu Symposium; Three Great Unity faction in the National Agency ULMWP).