1) Democracy takes a step back in Indonesia 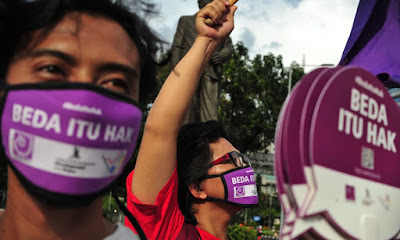 "Well firstly Indonesia should be kicked out. Indonesia is not Melanesian, Indonesia does not have Melanesian interests at its heart and Indonesia is the oppressor of Melanesians in the regions lo West Papua Iran Jaya they used to call it."
Matthew Wale is an opposition MP in Solomon Islands.
And so it was a terrible mistake for Indonesia to be admitted as an associate member of the MSG."
Mr Wale's comments are in relation to Indonesia's opposition to the United Liberation Movement for West Papua which is seeking to be the West Papuan representative on the MSG.
So far the ULMWP has managed to secure observer status in the MSG despite considerable opposition from Indonesia.
Critics of Indonesia say undermining the ULMWP was one of the main reasons it sought to join the MSG.
But a spokesperson from Indonesia's Embassy in Canberra, Sade Bimantara, says this is not true.
"You know since the 1960s Indonesia, we have been contributing towards peace, stability and prosperity in the Asia Pacific region. So all we are doing also in the South Pacific is expanding that sort of architecture building and norm setting into the South Pacific as well and working with Australia and working with New Zealand and other countries in the South Pacific region."
But the peace rhetoric stops when it comes to the ULMWP and its bid for full membership in the MSG.
"ULMWP does not belong in the MSG. It is not a state and does not represent the almost four million West Papuans living in the Papua and West Papua provinces of Indonesia. They do not have the mandate and never contested in the democratic process in Papua and West Papua."
But the indigenous New Caledonian pro-independence group the FLNKS is a full member of the MSG.
However Mr Bimantara says West Papua cannot be compared to the FLNKS.
"New Caledonia is recognised by the United Nations and is on the list of the C24 decolonisation committee. While West Papua the issue has been resolved since 1969 that Indonesia is a sovereign nation which encompasses also West Papua and that has been recognised by all of the countries in the United Nations system."
The latest shade on Indonesia's status in the MSG was cast by Solomon Islands' deputy prime minister Manasseh Sogavare who accused Fiji of putting pressure on other Melanesian countries to accept Indonesia.
An allegation Fiji's Defence Minister Ratu Inoke Kubuabola rubbished.
"I think he is either suffering from memory loss or is trying to play politics to his own constituents. He has forgotten that it was during his term when he was chair of the MSG when Indonesia was admitted to the MSG as an associate member."
But a Solomon Islands' academic at the University of Hawaii, Tarcisius Kabutaulaka, who was at the 2015 MSG meeting when Indonesia was granted its associate membership, says Ratu Inoke is trying to discount the fact that it was Fiji who sponsored Indonesia's bid and Fiji who had the most riding on its outcome.
"Fiji has an economic relationship with Indonesia and also there are connections in terms of exchanges of ideas vis-a-vis the military in particular. And so it is an important friend for Fiji."
Economically PNG shares a similar relationship with Indonesia to Fiji but it has even more reason to try and keep Indonesia on side given its shared land border.
Vanuatu and Solomon Islands have no such restrictions.
Solomon Islands' opposition MP Matthew Wale says since Indonesia joined the MSG it has had a chilling effect on conversations about human rights abuses and the push for self-determination in West Papua.
Mr Wale says the MSG was created to help Melanesians gain independence from their colonial masters and it has strayed too far from its roots.
"The MSG has worked itself into a bad joke. A really seriously bad joke. I advocate for the dismantling of the MSG and then a re-constituting of something new in its place that will truly advocate for decolonisation and much better treatment of Melanesians that are oppressed that are living under conditions that are not at all humane."
But Indonesia's Sade Bimantara, says the entire region is misguided on the issue of West Papua. He says Papuans are already "politically" free.
"...well West Papua is free because it is a democracy, it elects directly their own leaders and their government can freely govern in Papua and West Papua and the majority of the members of government are West Papuan natives. And also financially they are also free to manage their own finances."
On the subject of finances the MSG has experienced difficulty running its Port Vila based secretariat which was built by the Chinese government and has been getting financial support from Indonesia.
Tarcisius Kabutaulaka says it is an arrangement that further compromises the objectivity of the group.
"You know running a regional organisation or in this case a sub-regional organisation is expensive. And Indonesia has taken advantage of that and I think that is partly a result of lack planning on the part of our MSG countries. But there are creative ways of running regional organisations that would not hold us accountable to powers outside of the region that are putting money into these kinds of things."
Despite Indonesia's opposition the ULMWP's bid for membership it is still unresolved.
The MSG secretariat is looking at the application through a newly drafted set of guidelines on admission.
The outcome of this application will most likely set the tone for the next chapter of Melanesia's love/hate relationship with Indonesia.
———————————————————
https://www.ucanews.com/news/mosque-in-indonesia-has-papuan-christians-seething/81878
3) Mosque in Indonesia has Papuan Christians seething

The under-construction minaret of Al-Aqsha mosque in Sentani, capital of Jayapura district in Papua province.
The Communion of Churches in Jayapura district, known as PGGJ, opposes the construction of the
minaret as it is taller than church buildings in the area. (Photo by Benny Mawel)

The height of a minaret at a Muslim mosque in Indonesia's predominantly Christian Papuaprovince has Protestants and Catholics hot under the collar as they claim it is being built to deliberately overshadow nearby churches.
The Protestant Communion of Churches in Jayapura district, known as the PGGJ, has called for the minaret in the city of Sentani to be pulled down, a call backed by a local Catholic priest who called opposition to the tower a move to counter intolerance.
"Construction of Al-Aqsha mosque's minaret must be halted and demolished, while the mosque itself must lowered to the same height as church buildings in the area," Protestant Church leaders said in a statement sent to the government and Muslim leaders.
They also said their protest underlined their concern among Papuan Christians over the growing influence of Islam in Papua province.
Franciscan Father Hendrikus Nahak from Redeemer Parish in Sentani told ucanews.com on March 22 that the Protestant protest was a move to counter intolerance, which was being displayed through ego and the need by the mosque's builders to overshadow nearby churches.
"Ego makes people fall into pride. Pride makes the faithful more concerned with the accessories of faith rather than the substance of faith, and people try to show it in life," said the priest whose church is about 100 meters away from the mosque.
"Accessories should not negate the substance of faith," he said. "Even a small building, which appreciates other believers, is not really a problem."
Referring to the growing influence of Islam, Father Nahak, who has served the area for about ten years, claimed the number of Muslims particularly in cities has increased.
"It can be seen in the construction of mosques and mushola [small mosques] everywhere. In Jayapura district this is very obvious," he said.
About 1.9 million of Papua's 2.8 million population are Protestants, 0.5 million Catholics and 0.4 million Muslims. The rest are Confucians, Buddhists and Hindus, according to the last census.
PGGJ chairman Reverend Robby Depondoye said their protest is also to try and buck a trend that is taking place across Papua.
"Old mosques are demolished and rebuilt to a design similar to the Al-Aqsha mosque," he said.
According to Marianus Yaung, a member of the PGGJ's law and education desk, the under-construction minaret is about 30-meters high while church buildings are only 15-meters high on average.
The Protestant group also called for a ban on the building of mosques in residential areas.
Muhammad Taufik, who manages Al-Aqsha mosque, refused to comment.
Meanwhile, the chairman of the Jayapura chapter of the Indonesian Ulema Council, Saiful Islam Al Payage said the issue should be resolved through "dialogue and peaceful means."
—————————————————

Posted by AWPA Sydney News at 2:32 AM