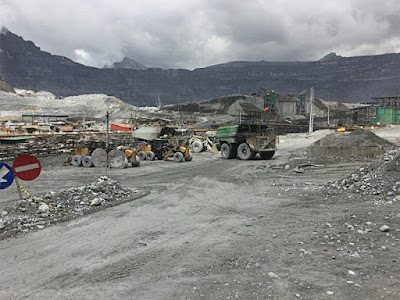 A heavy vehicle drives through an open pit mine at gold and copper miner PT Freeport Indonesia’s open pit facility in Grasberg, Tembagapura, Mimika, Papua. (JP/Nethy Dharma Somba)
The government collected US$756 million in revenue from gold and copper miner PT Freeport Indonesia (PTFI) last year, of which 19.9 percent came from non-tax revenue (PNBP) and 17.85 percent from dividend.
PTFI paid $151 million in PNBP and $135 million in dividend to the government in 2017. Furthermore, it also paid $82 million in export duty, $108 million in corporate income tax and $280 million in other types of revenue.
“Total state revenues from PTFI amounted to $756 million in 2017 alone and $17.3 billion in the 1992-2017 period,” PTFI executive vice president Tony Wenas said during a hearing with House of Representatives Commission VII overseeing energy on Wednesday.
PTFI, the local unit of United States-based mining giant Freeport-McMoRan (FCX), has estimated that it will have to pay $6 billion in PNBP within the 2018-2041 period.
Since early 2017, the government has been negotiating intensely with FCX regarding PTFI’s future operations in the country. PTFI currently operates the Grasberg mine, the world's largest gold mine and second-largest copper mine.
The government's demand include an increase in Indonesian ownership in PTFI from 9.36 percent to 51 percent in return for an extension to PTFI's operating permit. PTFI is also expected to convert its contract of work (CoW) into the special mining permit (IUPK) and build a new smelter by January 2022.
President Joko “Jokowi” Widodo has called for negotiations with PTFI to be completed by April at the latest. (bbn)
————————————————————
http://www.fbc.com.fj/fiji/60782/sogavare-suffering-from-memory-loss-ratu-inoke
Fiji News