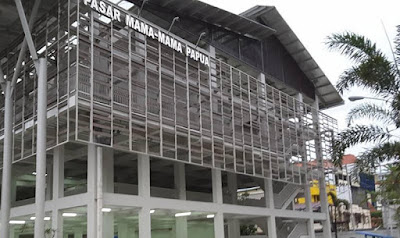 Caption: Pasar Mama-Mama Papua in Jalan Percetakan, Kelurahan Imbi, Jayapura Utara Sub-district, Jayapura City. – Jubi/Dok
Jayapura, Jubi – On 7 March 2018, in celebration of the 108th anniversary of Jayapura City, the Mayor of Jayapura City Benhur Tomi Mano launched Pasar Mama-Mama Papua, a traditional market that especially accommodating Papuan women traders.
This fourth-floor semi-modern market is built on an area of 2,400 square meters, which is located in Jalan Percetakan, Jayapura Utara Sub-district. It reflects a triumph of Papuan trader women who united in the Solidarity for indigenous women traders (Solpap) since 2003.
It started 14 years ago when some indigenous traders asked the Papua Provincial Government to provide a permanent market. They were never tired to speak out their voice. As a result, the provincial government built a temporary market which location is about 300 meters from the current permanent market. However, this does not answer their demand.
The traders were still asking their aspiration of the permanent market to the provincial government and Papua House of Representative.
A new hope arose in 2014. When Joko Widodo (Jokowi) was elected to be the President of Indonesia, he promised to build a permanent market. Their long waiting has been come true at last. On 30 April 2016, Jokowi put the first stone of this building. The market was completed in the early of 2017. Unfortunately, it couldn’t be occupied by women traders for some reasons. Despite not being yet inaugurated, one of the obstacles is a charge from landowners who claim for payment over their land. However, Papuan legislator John NR Gobai, who previously worked with Solpap in declaring these women’s aspiration, said nothing should be worried about.
“It is a mayor’s responsibility. As a native of Port Numbay (another name of Jayapura City), I believe he knew what he supposed to do,” said Gobai to Jubi on Tuesday (6/3/2018). According to him, in respect of the land tenure rights, traders from Port Numbai should be given a place in the market. This has been discussed with the municipal government in a meeting with Solpap and indigenous women traders recently. He further said it has become a common law that the owners of the territory will claim their rights. As long as they can be empowered, then it must be done.
“We will accommodate this, so everything can be well run. Furthermore, Solpap has always put a dialogue in the first place,” he said. The Papua House of Representative, according to him, will encourage the government in nurturing the indigenous women traders. In addition, the Papua Governor Lukas Enembe has made a breakthrough by providing a financial support for Papuan Trade Chamber (KAPP) to develop the community-based economy.
“We will definitely go with the government to implement the empowerment of Papua indigenous traders,” he said. In addition to the government, he added, the Bank of Papua is also expected to take a role by providing low-interest rate credits to Papuan indigenous traders.
He reminds the municipal government to not monopolize the management of the market. As a partner, Solpap has been assisted the indigenous women traders for 14 years. So it should be given a trust. “Solpap should be compensated with a trust for their 14 years works. Every shortcomings and mistake are common. Therefore, the partnership between Solpan and municipal government is legitimate. There should be a regional regulation, municipal regulation and other legal products to be established,” said Gobai.
Solpap Coordinator Franky Warer said Solpap is ready to carry out a mandate in providing assistance to the indigenous women traders in the market. According to him, this is not a new task because they have worked and fought together.
And now, when their struggle has been successful, Solpap would not let the women traders walk alone. “Based on our last conversation with the mayor, he said there would be a program for the women traders. Solpap would be more focus on the empowerment or capacity building of women traders,” said Warer.
Meanwhile, Solpap Secretary Natan Tebai agreed with John NR Gobai. He expected the municipal government doesn’t ignore the existence of Solpap because it has played a big role in the realization of the market.
In a meeting between Solpap, the mayor and the representative of Jayapura Municipal Industry and Trade Office on 2 March 2018, it is agreed that Solpap would handle the market management. He expected there is a regional regulation to legitimate Solpap as a partner of the government, while the government should deal with the maintenance of building and administration.
He further said the women traders do not want the municipal government to change the role of Solpap, because Solpap has been with them all the times. “Solpap see the government as a partner. We are here to help the government in assisting the women traders, not to oppose it,” said Tebai. (*)
Reporter: Arjuna Pademme
Editor: Pipit Maizier
----------------------------------------------
https://www.washingtonpost.com/world/asia_pacific/indonesia-seizes-illegally-logged-wood-from-papua/2018/03/09/50946c0c-2363-11e8-946c-9420060cb7bd_story.html?utm_term=.67d7f1792a49
2) Indonesia seizes illegally logged wood from Papua
By Associated Press March 9 at 1:30 AM
JAKARTA, Indonesia — Indonesian authorities foiled the shipment of 21 containers of prized ironwood from Papua, highlighting what environmentalists say is a rampant illegal trade in the country’s easternmost region.
The Forestry and Environment Ministry’s law enforcement agency said the wood from the Kaimana tropical forest was processed and ready for shipment to Surabaya, home to a major port and a center of Indonesia’s wood furniture manufacturing and export industry on the island of Java.
The seizure was made Tuesday and announced Thursday.
Greenpeace Indonesia said the seizure is small compared with long-standing smuggling from Papua where no “big actors” have been prosecuted.
Indonesia was in 2016 admitted to an EU licensing system that makes it easier for Indonesian wood producers to export to the bloc.
——————————————
http://www.thejakartapost.com/news/2018/03/08/activists-march-against-violence-toward-women-in-papua.html
3) Activists march against violence toward women in Papua
Nethy Dharma Somba The Jakarta Post
Jayapura | Thu, March 8, 2018 | 05:45 pm 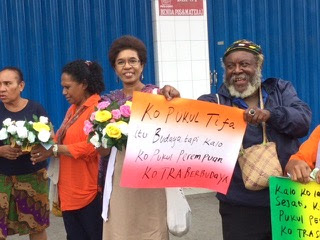 Activists rally in Jayapura, Papua, on International Women's Day on March 8, 2018, to call on men to end violence against women. (JP/Nethy Dharma Somba)
Dozens of women and several men marched in Jayapura, Papua, to show their support for the fight against gender-based violence on International Women's Day on Thursday. They gave flowers and areca nuts to people driving around Abepura traffic circle in Jayapura, Papua, on Thursday.
The areca nuts are the symbol for peace. We appeal to people to communicate and interact peacefully with women,” said Vien Yarangga, the coordinator of the march.
Jayapura
Jakarta
Purworejo
Psychological abuse
64.5
55.8
46.8
Physical abuse
37.7
12.5
11.5
Rape
43.8
24.1
17.9
Sexual violence
49.2
29.4
22.3
Economic neglect
49.8
32.6
33.3
2,577 male respondents aged 18-49
Posted by AWPA Sydney News at 11:38 PM