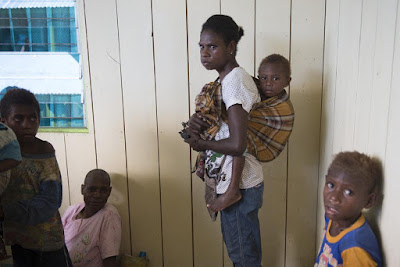 A Papuan woman and their children wait for medical treatment at local clinic at Ayam village in Asmat district in Indonesia's easternmost Papua province on Jan. 26, 2018. (AFP/Bay Ismoyo)

As many as 12 students from Yogyakarta-based Gadjah Mada University (UGM) have been sent to complete a community service work program, known as KKN, in Asmat regency, Papua, to help the regency deal with the recent health crisis that has seen an extraordinary occurrence (KLB) status be declared for measles and malnutrition.
The students were the first KKN students ever deployed to Asmat, UGM’s community service director Irfan Dwidya Prijambada said. The group would be stationed in the regency’s capital of Agats for 45 days.
During their stay, the students will be tasked with initiating a health promotion program as well as a community empowerment program focused on the sectors of education, the economy and environment.
For the first batch of students ever sent to the area, their main task would be to build trust with the community, Irfan told the students during the official departure ceremony at the university’s campus in Yogyakarta recently.
Trust was pivotal to the long term success of the program, which would be continued for at least three consecutive years with different batches of students, he said.
Irfan added that the program in Asmat was held in response to the recent measles and malnutrition outbreak that had claimed the lives of at least 72 children in the regency as of February 2018.
Of the 12 participating students, 10 are students of UGM’s school of medicine. The other two are from the school of geography and the school of economy and business.
“Hopefully our students’ contribution in Asmat will be just the beginning of a change in the people’s mindset and behavior so that another KLB will not occur again and other unwanted occurrences can be prevented as well,” Irfan said. (rin)
-------------------------------------
https://en.antaranews.com/news/115017/government-to-continue-building-road-along-png-border-in-papua
2) Government to continue building road along PNG border in Papua
Reporter: SYSTEM  7 hours ago
Jakarta (ANTARA News) - The government will continue building a road along the border between the country and Papua New Guinea in Papua, a cabinet minister has said.Until the end of 2017, around 891 kilometers of the total length of 1,098 kilometers were already completed, Public Works and Housing Minister Basuki Hadimuljono."In 2019, all border roads between Merauke in the south and Jayapura in the north would be connected," Basuki said in a news release received here on Saturday.Basuki issued the statement on his way to inspect the condition of a 424 kilometer part of road between Merauke and Boven Digul.The condition of road, which largely unpaved, is relatively good although there are around 58 kilometers need repairs.The Minister said he would send a special team from Jakarta to speed up work for the road repair.He said the border road had given concrete results for the border people."Normally in the past, it took weeks to cover the distance, but now it needs only 8 hours and when the condition is better it would take only 6 hours," he said.District Head of Boven Digul Benediktus Tambonot, who accompanied the minister in the inspection said the condition of the road between Merauke and Bouven Digul had improved gradually."I thank the government for the serious attention that in three to four months the repairs would be finished," Benediktus said.He said the road has greatly facilitated transport of goods and people and the impact is a decline in the prices of goods needed by the people in interior areas.Previously when the roads were badly damaged and were not yet connected the prices were high , but now the prices of essential goods, building materials are much cheaper, he said.The repair of the road between Merauke-Boven Digul were difficult because of the swamp area and soft soil. It needs much of land filling. (AS)(T.SYS/B/H-ASG/F001)
Posted by AWPA Sydney News at 1:21 PM