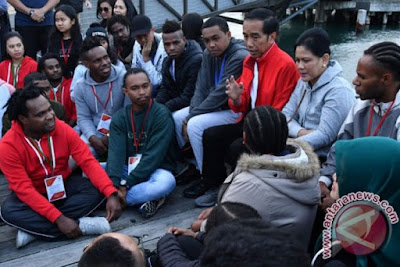 Jakarta (ANTARA News) - Visiting Indonesian President Joko Widodo (Jokowi) told the country`s citizens living in New Zealand about Papua and the diaspora in a meeting with them at Amopura Gathering, Te Papa Museum in Wellington on Monday.The president also told the Indonesian citizens about his experience when carrying out working visits to various underdeveloped regions in Indonesia, according to Bey Machmudin, head of the presidential press bureau, in a statement received by ANTARA on Monday.A number of Indonesian citizens in the meeting, asked questions ranging from Papua to diaspora issues."Bapak (Mr) President, what is your motivation that makes you so often come to Papua?" The question was raised by Fransiscus Orlando, one of the citizens of Papua origin who lives in New Zealand.The president, who was accompanied by First Lady Iriana Joko Widodo and Foreign Minister Marsudi, responded that being a leader, he wanted to see directly about condition of society and infrastructure there. According to him, eastern Indonesia has been too long forgotten and overlooked."One and a half months after being sworn in, I immediately flew to Papua. To date, I have come to Papua seven times and it is the province I visit most often. Whereas from Jakarta to Papua takes six hours. But this is the territory of the Unitary State of Republic of Indonesia that should draw attention," he said.The President also shared his stories and experiences regarding his working visits to various disadvantaged regions in Indonesia. One of them was about his visit to Nduga District in Papua.Reported by Agus Salim(TZ.SYS/B/B003/S012)
Posted by AWPA Sydney News at 10:47 PM