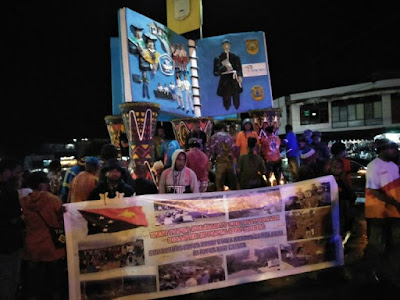 Candles Action and West Papua Solidarity for the victims of the earthquake in PNG launched in Lingkaran Abepura. – Jubi/Dok.

Jayapura, Jubi – West Papua Solidarity for the earthquake victims in Papua New Guinea has been launched on Monday, 12 March 2018 in Lingkaran Abepura, Jayapura City, Papua.
“Starting today, we are in solidarity,” the Coordinator of West Papua Solidarity Sem Awom read his statement in front of hundreds of students and youth activists in Abepura.
He said the act of solidarity is aimed to express sympathy for their brothers in PNG who were died, injured or traumatized in the recent earthquake. He also said the victims certainly need supports from the people of Papua, Melanesia and the world as well. “This solidarity has to break all boundaries,” said Awom.
Another Papuan activist Nelius Wenda said the earthquake that stroked Papua New Guinea has reminded him of the solidarity and ties of Papuan brotherhood. “We actually have a common ancestor, but separated by State border,” he said.
When the earthquake happened, he said, Papuans grieved for the victims who died and injured. “We will do our best,” said Wenda.
Separately, the Secretary of West Papua Solidarity Kristianus Dogopia said fund raising to help the victims would continue until the end of the month. “We will come to houses and student dormitories to collect the funds. We will also speak to the church leaders to get involved in this fund raising,” he said. (*)
Reporter: Benny Mawel
Editor: Pipit Maizier
——————————————————————— 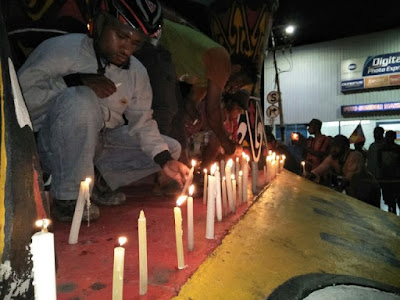 1,000 candles action for earthquake victims in PNG Abepura was held in Abepura. – Supplied

Jayapura, Jubi – West Papua Solidarity conducted a thousand candles action in Abepura, Jayapura City on Sunday (11/3/2018) to express deep condolence towards the earthquake victims in Papua New Guinea.
“West Papuan people expressed their condolences for their brothers in Papua New Guinea who get struck by a natural disaster,” said the Bureau Chief of the United Liberation Movement for West Papua, Sem Awom.
This event also marked the launching the West Papua Solidarity for the earthquake victims in PNG. “Starting today, we will disseminate information on the solidarity act for the earthquake victims in Papua New Guinea,” said Awom.
Moreover, he said it would not close the possibility for other supporters in different regions in Papua to join in the act, including West Papuan people who live in Papua New Guinea. In addition, the United Liberation Movement for West Papua also calls the international community to build a solidarity team because the number of victims has reached seventeen thousand people and they need help and supports.
The 7.5 Richter scale earthquake was reportedly hit the mountainous area of the Southern Highlands, Papua New Guinea, on February 26, 2018. It damaged houses and roads and killed more than 100 people, while 500 were reportedly injured.
Papuan human right activist Markus Haluk expected all Papuan people could help the victims by directly engaging in the act of solidarity. According to him, participating in the event was evidence that people have the bond of brotherhood with the victims. “I hope this act resonates throughout the Papuan regions,” he said. (*)
Reporter: Benny Mawel
Editor: Pipit Maizier
------------------------------------------------
https://asiapacificreport.nz/2018/03/13/rainbow-warrior-takes-on-fresh-eco-mission-to-indonesia/
3) Rainbow Warrior takes on fresh eco mission to Papua, Indonesia
By PMC Editor -
By Astari Pinasthika Sarosa in Jakarta
The Greenpeace flagship Rainbow Warrior is sailing throughout Indonesia – including West Papua – as a vehicle for environmental campaigns.
Rainbow Warrior has often sailed to remote areas to directly see the environmental issues in the region and immediately act against its destruction.
Recently in the Philippines, this is the first visit to Indonesia since 2013. The Rainbow Warrior will be sailing in the archipelago from this week until next month.
The visit themed Jelajah Harmoni Nusantara will be the longest tour of the Rainbow Warrior.
Its first destination is Papua to witness the natural beauty of Papuan rainforest. The ship’s crew will also see the underwater life of Raja Ampat.
After leaving Papua, the Rainbow Warrior will head to Bali, sampling a rich culture which holds local wisdom, and its beliefs that the best source of energy comes from nature.
The last destination is Jakarta. As the capital city of Indonesia, Jakarta has many issues including pollution and waste.
‘Eco-friendly’ city goalThe Rainbow Warrior aims to help Jakarta to be a more comfortable and eco-friendly city.
“The main point of this tour is to create harmony in protecting the Indonesian environment,” Greenpeace said in a press release.
The name Rainbow Warrior was based on the prophecy of a native American tribe Cree in saying, “When the earth becomes sick and dying, there will come a day when people from all over the world will rise up as the Rainbow Warrior.”
The Rainbow Warrior is the third-generation version of the campaign ship.
The first generation vessel was destroyed by limpet mines. On 10 July 1985, French secret agents planted two bombs and sank the Rainbow Warrior, killing photojournalist Fernando Pereira.
After the bombing, the original Rainbow Warrior ship was towed to Matauri Bay, in New Zealand’s Cavalli Islands, and was submerged as an “alive reef” attracted marine life and recreational divers.
The second Rainbow Warrior sailed for 22 years until 2011 when she was replaced with the third generation Rainbow Warrior.
Like its predecessor, this ship carries out green and peaceful campaigns for the future of the planet.
——————————————————
http://www.atimes.com/article/australia-indonesia-border-tensions-resurface/

Indonesia’s long-held resentment over Australia’s sprawling maritime claims along their ill-defined border have spilled into the diplomatic arena following a recent settlement of a parallel dispute in neighboring Timor Leste, also known as East Timor.
Jakarta contends that the Timor agreement, which affects the jurisdiction of energy reserves worth billions of dollars in the Greater Sunrise gas fields, will nullify a 1997 treaty demarcating the exclusive economic zones (EEZs) of Indonesia and Australia.

Foreign ministry director-general of legal affairs and international treaties Damos Agusman said the Perth Treaty, which Indonesia has never ratified, “cannot enter into force as it stands now as it, inter alia, covers area that now belongs to TL [Timor Leste], and is the object of the conciliation.”

Precise details of the Timor Leste deal have not yet been released, but it is thought to have redrawn the border with Australia midway between the countries instead of relying on a Joint Petroleum Development Area (JPDA) that had left the best of the Greater Sunrise’s gas fields mostly in Australian hands. It is believed to hold at least US$31.5 billion of energy reserves.
About 80% of Greater Sunrise will remain in Australian territory if the border is simply moved an equal distance between the countries, as the field is outside the JPDA.
For Timor Leste to benefit, the JPDA would also need to be shifted east, taking it into Indonesian waters. Timor Leste and Indonesia have an equidistance agreement on their own territories in the eastern region.
Indonesia has responded as one would expect: it now wants to negotiate an equidistance agreement with Australia that would move their border further to the south and thus give Indonesia an 80% share of Sunrise. The coveted field is already closer to Indonesian territory than to Australia.
The existing border, based on a complicated series of 1972 compromises, is both east and west of the expected new Timor Leste-Australia boundary.
Like the original Timor agreement, it resulted from the inability of the new countries to agree on a demarcation; a series of fruitless negotiations was set aside in the 1980s and the de facto border became the edges of a JPDA, where royalties from oil and gas explorations would be shared.
Operating from a position of strength while Indonesia was rebuilding from the tumultuous Sukarno era, Australia took advantage of now-discredited international laws on marine boundaries that allowed signatories to use continental shelves as a basis for delineation.
Indonesia’s borders were pushed well north of the midway point, creating inevitable acrimony.

In 1997, Canberra sought a similar treaty on maritime resources above the seabed, but was unsuccessful because a proposed zone extending 370 kilometers from Australian shores would have created overlapping. As is customary in such cases, a border was declared midway between the two countries.
With separate agreements for the upper and lower seabed, Australia has continental possessions that are a short distance from Indonesia, yet cannot prevent Indonesian fishermen from sailing past these islands into the midway point of the maritime border much further to the south.
The islands of Ashmore and Cartier are only 170 kilometers below the island of Roti, which Indonesia claims through its West Timor territory; yet they are 320 kilometers from Australia, which has claimed the islands since 1933. Moving the border to a midway point would make them part of Indonesia.
Uninhabited and mostly visited by Indonesian fishermen, their loss would not be felt much in Canberra. But there are bigger concerns over the fate of Christmas Island and the Cocos island group, both closer to Indonesia than to Australia, which play a vital role in Canberra’s forward defense strategies.
Australian Foreign Minister Julie Bishop quickly moved to dampen calls for the negotiation of a permanent border, but nationalist feelings are running so high in Indonesia that Jakarta’s hands may be tied. There is particular anger over the disputed status of Ashmore and Cartier, which some Indonesian academics say was controlled by the Dutch, Indonesia’s colonial masters.
Indonesia would technically have the upper hand if the issue went to arbitration, as the equidistance rule is now standard practice under the United Nations Convention on the Law of the Sea (UNCLOS).
However, Australia withdrew from the UNCLOS tribunal and maritime jurisdiction of the International Court of Justice to halt Timor Leste’s claims in the 1990s.
The re-negotiation of Timor’s agreement was overseen by the Permanent Court of Arbitration (PCA) in The Hague, an inter-governmental organization that oversees the UNCLOS and the International Court of Justice. The PCA will hear disputes in special tribunals if either party rejects these covenants.
Canberra kept Timor Leste at bay for decades and could do the same to Jakarta. But this may be only the start of Australia’s problems, as there is a fourth country that wants a share of the oil and gas riches in the Timor Sea.
Papua New Guinea is now keen to overturn laws dating back to the 1870s that handed many of its maritime resources to the state government of Queensland in the era before the British colony became part of an Australian federation.
A new treaty was negotiated in 1978, but many inshore islands remained Australian territory in exchange for a deal granting Papua New Guinea extended fishing rights. One of these islands, Kussa, is just 200 meters from Papua New Guinea’s shores at low tide, which has apparently become too close for comfort.
-----------
---------------------