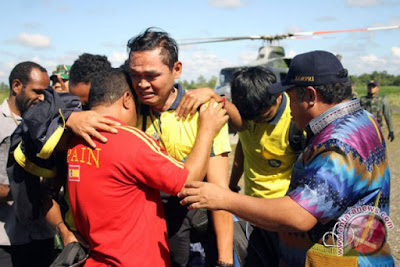 A number of teachers who successfully evacuated by TNI from Aroanop, Tembagapura District, embraced their relatives upon arrival in Timika, Mimika, Papua, Thursday (19/4/2018). (ANTARA PHOTO/Jeremias Rahadat)
Timika, Papua (ANTARA News) - The Indonesian Army has taken back Aroanop village in Papua from armed criminal groups respectively led by Joni Botak and Sabinus Waker, according to Colonel Frits Pelamonia, commander of the integrated task force armed criminal groups (KKSB)."Aroanop is safe and under control. We from the Indonesian Defense Forces (TNI) have taken control of it since 5:30 a.m. local time. My striking forces, four teams, have secured the vllage, and we have cleared it of," Pelamonia said here, Thursday.The armed criminal groups had controlled Aoranop after being pushed backed by TNI from Banti kampong in Tembagapura sub-district, Mimika District, Papua Province.In Aoranop, the groups persecuted and seized belongings of nine elementary school teachers on April 13. One teacher was reportedly raped by three members of the groups."We have gathered local residents and I gave them some guidance and convinced them that Aroanop comprising six kampongs, is under control and local people could resume their normal activities," he said.He said his officers would chase the criminals believed to have fled to Jagamin kampong. One group has ten members, and another has five to six members."Jagamin is one of their routes to escape, so we chase them. Our main task is to evacuate (several teachers), so we have to secure hilly areas to be used as evacuation route," he said.The Army on Thursday managed to evacuate 13 teachers mostly women, from Aroanop by two helicopters.A teacher of an elementary school in Arwanop was gang-raped by three members of armed criminal group (KKB) on April 12, 2018.The victim identified by her initial as MM fell unconscious after being raped by the three men, and later she gained her consciousness but was traumatized, Senior Commissioner Ahmad Kamal, spokesman of the Papua Provincial Police, said here Sunday.Armed criminal groups in Papua have frequently shoot police officers and kidnapped people.In November 2017, some 1,300 people, comprising of over 850 indigenous Papuans and 346 migrant workers, had been held hostages by an armed criminal group (KKB) in several villages in Tembagapura for about three weeks.reported by Jeremias Rahadat(T.SYS/A/KR-BSR/A/O001)
Posted by AWPA Sydney News at 1:59 PM