April 5, 2018 – The Hague
On 5th April 2018, The United Liberation Movement for West Papua (ULMWP) EU Mission organized a conference on West Papua’s right to self-determination. It was an historic day. 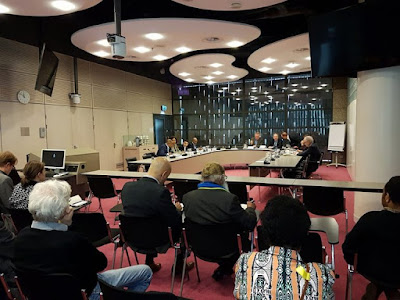 Greg Colton
Greater Australian engagement in the Pacific Islands region is needed if Canberra wants to ensure regional stability and underpin Australia’s national security.
KEY FINDINGS
Inconsistent engagement by Australia, the United States, France and New Zealand in the Pacific Islands region has created space that non-traditional powers have exploited to engage with sovereign Pacific Island states.
There is an increasing risk of geostrategic competition in the region, particularly with the growing influence of China and the economic leverage it holds over some indebted Pacific Island nations.
The Australian Government should pursue a deliberate strategy of forging stronger links with its traditional partners in the region, and more equitable partnerships with its Pacific Island neighbours, if it is to underpin regional stability and strengthen Australia’s national security………..
HTTPS://WWW.LOWYINSTITUTE.ORG/PUBLICATIONS/STRONGER-TOGETHER-SAFEGUARDING-AUSTRALIA-S-SECURITY-INTERESTS-THROUGH-CLOSER-PACIFIC-0
------------------
Posted by AWPA Sydney News at 1:22 PM