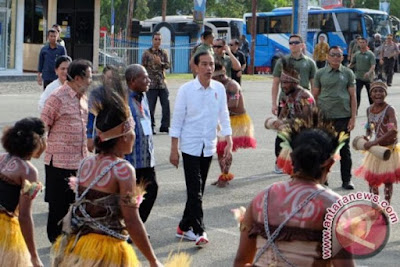 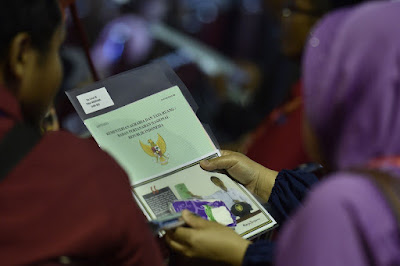 Land ownership: A resident looks at a land certificate she received from President Joko "Jokowi" Widodo during his visit in Sukabumi, West Java, on April 7. (Antara/Puspa Perwitasari)
Around 3,000 Papua residents received land certificates directly handed over by President Joko “Jokowi” Widodo in a ceremony at the Jayapura regent office in Gunung Merah, Sentani city, Jayapura, Papua, on Wednesday.
It was the first time Jokowi had distributed land certificates in Papua, which he has visited eight times in total since he was first elected President in 2014.
Yawa Bosway, a resident of Sarmi regency who attended the ceremony to receive a land certificate, expressed his gratitude for being able to get a certificate for his land without a complicated, costly process.
“I feel happy and want to thank Pak Jokowi because I have been able to receive this certificate so easily. My land in Sarmi is around 2,000 square meters or 2 hectares,” said Yawa.
At 3 p.m. local time on Wednesday, Jokowi and his entourage arrived at Sentani Airport in Jayapura, from where he proceeded to the Gunung Merah regent office, where thousands of residents had gathered and waited for his arrival for hours.
In the certificate handover ceremony, Jokowi told the residents that the certificates were proof of their land ownership. “By holding the certificates, we will feel more secure because the ownership right of our land has become clearer,” he said.
“I have ordered the Agrarian and Spatial Planning Minister [Sofyan Djalil] to accelerate the distribution of land certificates in all provinces across Indonesia. In 2017, we gave 70,000 certificates to people in Papua and this year, we will increase it to 80,000. I hope this target can be met,” said Jokowi. (ebf)
------------------------------
https://www.radionz.co.nz/international/pacific-news/354759/indonesia-s-president-visits-papua-to-check-on-projects
3) Indonesia's president visits Papua to check on projects
11:14 am today
Indonesia's President Joko Widodo is today expected to visit Papua region, widely known as West Papua.
In what is his eighth trip to Papua, Mr Widodo plans to travel to Jayapura, Timika, Asmat regency and Sorong.
The president is to visit a number of his government's projects aimed at accelerating economic and social development in Papua.
These include Jayapura's new Mama Mama market, an early childhood centre, and the Holtekamp Bridge in the Papuan capital, among other infrastructure projects.
According to a government spokesperson, President Widodo will also be distributing land titles to Papuan residents.
A joint Indonesian military and police force of around 2500 personnel has prepared to provide security for the president along his various stops.
--------------------------------
Posted by AWPA Sydney News at 1:22 PM