Mimika hostage taking, do not accuse any groups, says legislator 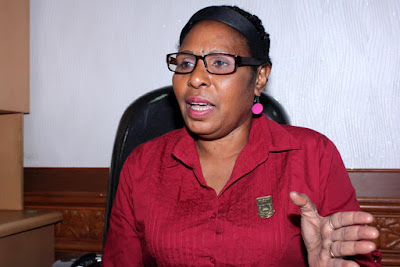 Papuan Legislator, Mathea Mamoyao – Jubi / Arjuna
Jayapura, Jubi – Mathea Mamoyao, Papuan legislator elected from Mimika and surrounding areas, said people should not accuse some groups upon the hostage-taking incident and the case of the rape of teachers that were occurred last week in Kampung Aroanop, Tembagapura Subdistrict, Mimika District last week.
Mamoyao, who is an indigenous woman of Kamoro, a tribe of Mimika District, was not sure the insurgent group members are the perpetrators. “I am not sure they did it because I’ve just returned from Timika. I searched the information about the incidents during my two days visit there. The villagers told me that the perpetrators wore a mask. So, how could we possibly identify them?” she said on Thursday (26/04/2018).
Even though she has no clue, she assumes this incident deliberately created. “The police must handle it immediately because the regional elections in seven districts, as well as the election of the governor, are getting closer. Don’t let anything that can hamper the national agenda happen,” she said. (*)
Reporter: Arjuna Pademme
Editor: Pipit Maizier
------------------------------------
Posted by AWPA Sydney News at 1:57 PM