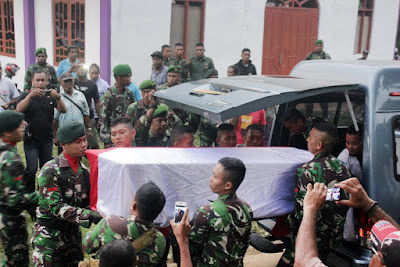 Indonesian Military (TNI) soldiers hold the coffin of their friend, Private First Class Vicky Irad Uba Rumpaidus, in Sorong, West Papua province, on Wednesday, April 4. Vicky was killed when shots were exchanged between the military and the Papua National Liberation Army (TPN-OPM) in Utikini village in Mimika regency, Papua province, on April 1. He died after being shot in his right temple. (Antara/Olha Mulalinda)
The Papua National Liberation Army (TPN-OPM), which is linked to the Free Papua independence movement, said on Wednesday morning over 1,000 civilian lives were at risk amid Indonesian Military (TNI) and liberation group armed conflicts in Tembagapura district, Mimika regency, Papua, near copper mine Freeport.
TPN spokesperson Hendrik Wanmang said they had gathered civilians in Kampung Opitawak and TPN fighters had retreated and left the kampung to avoid civilians being mistaken for armed fighters.
“There are women and children among the 1,000. We have told them if the Indonesian Military comes, don’t run; show yourselves with your hands up,” Wanmang told The Jakarta Post in Jakarta via phone.
Read also: TNI on hunt for armed assailants after exchange of fire in Tembagapura
Previously, the TNI said the armed assailants had taken control of several villages in Tembagapura district, namely Utikini, Longsoran, Kimbeli, Banti 1, Banti 2 and Opitawak. The authorities feared that it was part of the group’s warning to the TNI and the police that it wanted an open fight, the TNI said.
On Tuesday, Cendrawasih Military Command spokesman Col. M. Aidi said the assailants had set locals’ houses, a hospital and a school building on fire. The attack set the TNI to move and hunt down the armed assailants. The TNI said the military had kept the civilians safe.
One TNI soldier, Private First Class Vicky Irad Uba Rumpaidus, was killed when shots were exchanged between the military and the group in Utikini village on Sunday. He died after being shot in his right temple.
The TPN has a different account. Wanmang said on Sunday the shootout happened after the TNI passed a line set by the TPN as the border of the war zone.
On Wednesday, 270 personnel members from the TNI and the National Police entered Banti 2, and 31 personnel members from the Army’s Special Forces (Kopassus) entered Banti 1, the place where a shootout had happened earlier, the TPN claimed. “People are in danger,” Wanmang said.
Wanmang also accused the TNI of having fired mortars at people’s houses. “I saw one had cracked a window and the mortar set fire to the house,” Wanmang claimed on Wednesday.
The TNI said the TPN took the civilians hostage, but the TPN said the villagers were with them. “The villagers were all natives and they were with us throughout this fight against the TNI and the police. The TPN belongs to this society.
“Villagers can’t take up arms, so we fight [on behalf of the villagers] with their support,” he said on Tuesday evening.
“We, the TPN and the villagers, will continue to fight against injustice. We want Freeport to be shut down. [Freeport] is the root of the problems [here]. We are natives; we own the land, the mountain and the gold. We demand what belongs to us,” he said, referring to United States-based mining giant PT Freeport Indonesia, which has been operating in Papua since 1970.
The incident marks a long-standing armed conflict between Indonesia’s security personnel and Papuan self-determination groups.
Last year, a member of the National Police’s Mobile Brigade (Brimob) stationed in Timika, Papua, was killed in a shootout between security personnel and unidentified gunmen on Utikini bridge, Tembagapura, Mimika regency.
Papua’s “problematic” integration into Indonesia in 1962 and the exploitation of Papua’s natural resources by private companies have often been touted as the main sources of native Papuans’ grievances.
———————————————
https://www.radionz.co.nz/international/pacific-news/354060/papuan-political-prisoner-freed
2) Papuan political prisoner freed
9:44 am today
A member of the pro-independence West Papua National Committee has been freed from prison having completed his jail term.
Yanto Awerkion was given a ten-month sentence for treason by an Indonesian court.
Mr Awerkion was arrested in May 2017 in Timika because of his involvement with a petition calling for West Papuan independence from Indonesia.
After 17 court appearances, trial delays and over nine months in jail, the political prisoner was sentenced mid last month.
With time already served, Mr Awerkion was due to be released by the end of the month.
Mr Awerkion had been facing a potential 15-year sentence, the maximum in Indonesia for treason.
-----------------

Posted by AWPA Sydney News at 1:50 AM