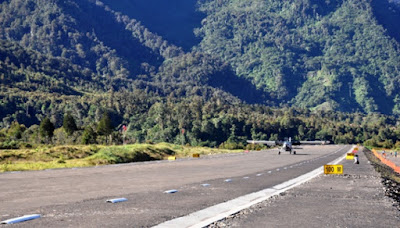 Susi Air's Pilatus Porter aircraft landed at Arwanop airfield in Timika, Papua. The airfield was developed by PT Freeport Indonesia. ANTARA FOTO
TEMPO.CO, Jakarta – An employee of Freeport Indonesia who is also a South African national was shot at by an unknown person today at the Hidden Valley mile 66 housing area in Tembagapura District, Papua.
The South African citizen, Morne Francis Ras, was being fired on eight to ten times while walking towards his car parked in front of his house.
Fortunately, Morne survived this incident.
According to a testimony of a Mine UG employee, Craig Eugene Johnson, Morne Francis immediately lied down beside his car on hearing the shots.
Read: Freeport Evacuating Mine Worker Families after Shootings
An ambulance and the authorities arrived at the scene minutes after the incident began, and an investigation into the area’s vicinity ensued.
The mining company sounded the alarms following the incident to warn employees and people in the vicinity of the Hidden Valley. Morne Francis was ushered to the Tembagapura Hospital at around 08:50 Indonesian Eastern Time (WIT) for medical care.
Read: Police Identify Perpetrators of Freeport Shooting Incident
Up until 10:00 WIT, investigation by local authorities was still afoot, as they combed the forest located behind the Hidden Valley mile 66 housing area.
ANTARA
—————————————————————
https://www.radionz.co.nz/international/pacific-news/356098/indonesia-plans-to-improve-electrification-in-papua-region
2) Indonesia plans to improve electrification in Papua region
A programme called 'Bright Indonesia' has been launched by the Ministry of Energy and Mineral Resources to increase the electrification rate in the country's eastern provinces.
Antara News reported that through the programme, Indonesia aimed to boost its electrification rate to 97 per cent of the country's total population by 2019.
This would require the building of new power plants, that would include the use of renewable energy sources, with a total capacity of 35 thousand megawatts.
The programme was expected to provide electricity to underdeveloped villages including in Papua and West Papua.
-----------------------
Posted by AWPA Sydney News at 1:42 PM