I am writing to you again concerning West Papuan activist Victor Yeimo, who is the international spokesperson for the West Papua National Committee (KNPB), a peaceful civil society organisation in West Papua.

Victor was arrested on the 9 May 2021 and faces a number of charges including treason because of his peaceful role in the anti-racism protests on the 19 August in 2019.  He is accused of violating Articles 106 and 110 of the Criminal Code on treason and conspiracy to commit treason.  He is being held at the Mako Brimob Prison in Jayapura.

There is concern for his health which is deteriorating. He is losing weight and has been coughing blood for the past few days.

Amnesty International Indonesia has also raised concerns about Victor and also about the arrest of 14 Cendrawasih University students who at a protest on the 10 August were calling for the release of Victor.

Amnesty International Indonesia deputy director Wirya Adiwena said that the students should be protected and facilitated—not arrested and treated like criminals. "Like Victor, these Uncen students are only using their right to exercise freedom of expression, assembly and association, to peacefully speak their minds," said Wirya.

The jailing of peaceful activists, simply because they took part in a demonstration is against their rights under the Universal Declaration of Human Rights which states,

Everyone has the right to freedom of opinion and expression; this right includes freedom to hold opinions without interference and to seek receive and impart information and ideas though any media and regardless of frontiers (Article 19).

1) Everyone has the right to freedom of peaceful assembly and association.

AWPA is greatly concerned that by denying Victor proper adequate medical care, the Indonesian authorities are putting Victor’s health at grave risk of death or other irreversible damage to his health.

We urge you to use your good offices with the Indonesian Government to call for the immediate and unconditional release of Victor Yeimo and all political prisoners. 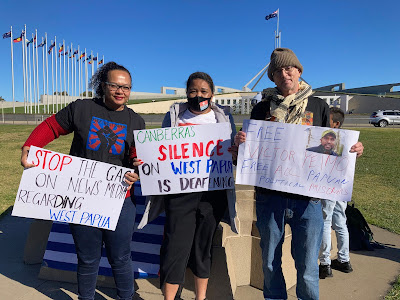