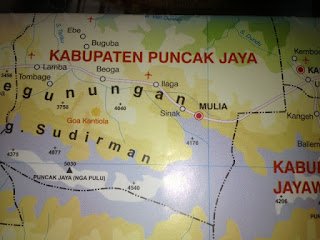 The Australia West Papua Association is concerned that local people in the areas where the attacks against the Indonesian military occurred will suffer as security operations are conducted in the hunt for the perpetrators of the attacks. The attacks occurred in Sinak and Tingginambut in the Puncak Jaya District

and in another report the
Cenderawasih Regional Military Commander Maj Gen Christian Zebua who oversees Papua province said earlier the shooting was done by the Goliat Tabuni and Murib Military separatist rebels.
"We will hunt them together with police because they had committed barbaric acts beyond humanity," the regional military commander said.

Joe Collins of AWPA said although some members of the security forces are blaming the OPM for being responsible for the attacks many reports are simply referring to the attackers as unknown gunmen. Papuan leaders have pointed out that security forces in the past have staged such attacks in order to create instability in West Papua.

There is always concern for the local people in security operations and it should be remembered that in June of last year there was an attack by the military on the village of Honai Lama, a sub district of Wamena in the Baliem Valley. During that attack a number of people were killed and wounded and a large number of houses destroyed. The attack on the village was sparked by a road accident in which a child was knocked down while he was playing by the side of the road by two soldiers on motorbikes from Kostrad, the Indonesian Army's strategic reserve.  The villagers turned on the soldiers and in the melee that followed the soldiers were dragged from their motorcycles and one died after allegedly being stabbed. The revenge attack on the local villagers shows how unprofessional and undisciplined the Indonesian military can be.