1) BIN Says OPM is Active in Other Nations

1) BIN Says OPM is Active in Other Nations 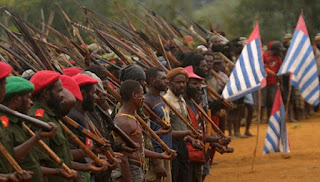 WEDNESDAY, 08 MAY, 2013 | 00:26 WIB
1) BIN Says OPM is Active in Other Nations
Zoom Out Zoom In Normal
TEMPO.CO, Jakarta - National Intelligence Agency (BIN) chief Marciano Norman says the separatist Free Papua Movement (OPM) organization has political activities in a number of other nations aside from the United Kingdom. However, OPM only has an international branch office in the UK. "This group is active in Europe, Australia, and south Pacific nations, but they did not officially open an office as they did in the UK," said Marciano at the presidential palace yesterday.
Marciano said the OPM group headed by Benny Wenda is active in the Netherlands and the UK. Benny has long been active in Oxford and has garnered support from groups in the city and the country.
Marciano said that OPM activities in European nations are backed by local non-profit organizations. Therefore, the government must foster a relationship and gain support from OPM based nations. "The British government and Foreign Minister Marty Natalegawa have taken proportional actions."
FRANSISCO ROSARIANS | WAYAN AGUS | EFRI R
--------------------------------------------------------
http://www.rnzi.com/pages/news.php?op=read&id=75857
2) Indonesian legislature accuses UK of interfering in West Papua
Posted at 08:42 on 07 May, 2013 UTC
Indonesia’s House of Representatives is urging the government to ask the United Kingdom to not interfere with affairs in West Papua.
The Jakarta Post reports the House deputy speaker, Priyo Budi Santoso, as saying the legislature is deeply disappointed with the British Parliament whom he accuses of supporting the separatist Free Papua Movement.
Mr Santoso says he believes the UK has interfered with Indonesia’s internal affairs, which he compares to the UK’s problems with separatist elements in Northern Ireland.
The newspaper reports that anti-UK protests have been mounting since the mayor of Oxford and an opposition MP attended a ceremony at a West Papuan office in the English city.
But the British Ambassador to Indonesia, Mark Canning, says the British Government recognises Papua as part of Indonesia and does not support calls for Papuan Independence.
Meanwhile, the newly elected Governor of Papua, Lukas Enembe, is meeting with House leaders to discuss separatist sentiments in the province.
Posted by AWPA Sydney News at 1:45 PM