Of monitoring the media, around 0915, the people of Papua demonstrations. Circle Abepura, Martinus Yohami who is chairman of the slide area KNPB officers arrested while making speeches. While in Housing 3 Waena, joint military / police tried to break up the mass action led by Agus Kosay.

In Sentani, masses marched right in the eyes of the police dispersed the Post 7. Chairman KNPB Sentani area, Alen lead the masses to get to a place of worship.

After bargaining, the masses under the leadership of Chairman KNPB, Victor finally marched Yeimo way to Sentani by shouting slogans of Papua Merdeka. About 01.00 noon mass at the police blockade the village of Hope, but they still penetrate the chants in unison to enter the field in Kampung Harapan Kingmi Sentani.

The event led KNPB Chairman, Victor Yeimo is followed by remarks the chairman of National Parliament of Papua Barat (PNWP), Buchtar Tabuni. PNWP in his speech delivered at the same time the declaration of the results of the parliamentary meeting conducted for 1 week, in which the trial was decided and declared "West Papua region sebaga Zone Enforcement of Human Rights".

The event was followed by a brief worship led Selphy Yeimo. Pengohotbah invite people to commemorate the 50 years of oppression with the power of Jesus. "It's time the struggle must prioritize and put Jesus on the front," says Ecclesiastes.

Atmosphere event in this field was done under terror by the intervention of the military / police who forced entry in the ongoing worship event. 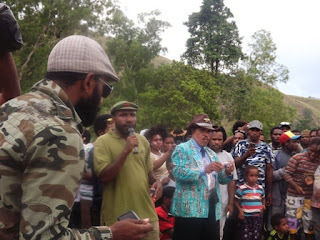 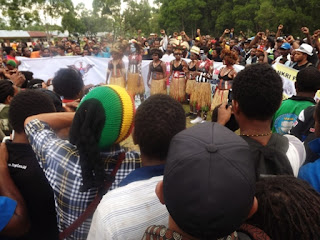 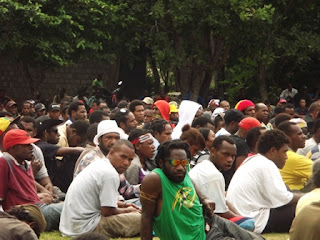 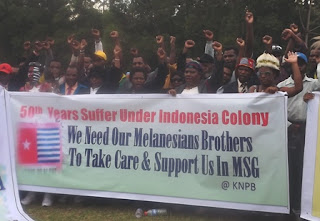 Illustration (Jubi / ist)
Jayapura, fifth (Jubi) - By May 1, military and police officers return to repressive measures against civil society in Papua. The result is violence victims to death in the District and the City of Sorong, West Papua.

Exactly one day before the date of May 1, the combined forces TNI / police staged a march, convoys and skydiving in the city and district of Sorong in order to May 1 as a historic day in Indonesia. Residents in District Aimas, said on April 30 that, at around 20:00 WP apparatus combined Military / Police use the Avanza car, one car and one car Inova patrol pikc-up types belonging Police approached a number of people who are in a tent that size 6 × 3. This tent is a shelter Papua Task Force.

According to residents, the combined forces of a sudden out of the car with a full weapons firing at citizens. The shooting resulted in two (2) people died and three (3) persons were injured. This incident occurred in Jalan Klailin RT 3 Aimas District, Sorong, West Papua Province. Distance from the scene to Mapolres Aimas shoves itself, about 800 meters away.

Data victims of the incident are as follows:

Three injured in the still hospitalized in Sorong regency government Selebesolu, Km 12 Jln Klasaman Sorong. While the victim is being held at the Police Headquarters Sorong regency of 7 people, but until now did not know his identity. (Jubi / Victor Mambor) 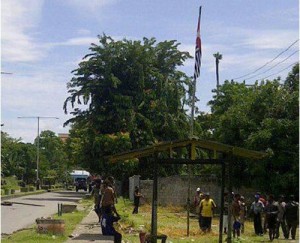 Jayapura, 01/5 (Jubi) - Morning Star flag, for half an hour had flown in front of the new Mimika Presidential primary, New Kwamki, not far from New Mimika police.

Warning May 1 as a day of integration (version Indonesian government) characterized the Morning Star flag, a symbol of Papuan liberation, in the districts of Papua and West Papua provinces. No exception Timika town. From the data collected tabloidjubi.com, action raising the Morning Star flag in Timika started At 13:15 CDT. People are starting to dig a hole for the flag pole around pukulpukul, 13.18. Pinang tree is used as the flag pole raised and lowered between 13:30 and by officials at, 14:00 CET.

Decrease by security forces this flag was colored by tension as security forces issued a warning shot when lowering the flag. Several members of Pioneers and Dalmas Mimika Police Police assisted New Mimika, Papua Police Mobile Brigade Detachment B and a military garrison that arrived on the scene looked several times issued a warning shot into the air to force the citizens to stop the action.

Some residents who secured his involvement will be explored. If convicted of acts against the law then they will be processed further.

"We follow the rules of the state, not the citizens rule. Who is at fault remains our process, "said Rontini.

Benny Pakage, human rights activists said the diocese Mimika no police detained 15 people. And most of the people involved in the action instead of raising the Morning Star New Kwamki residents, the location flag hoisted. Benny also mentions a number of security forces were hit, but no victims who died. The victim is currently being treated at Mitra Masyarakat Hospital, Timika. While 15 others were detained by police at Mile 32.

"Not just flag alone, security forces continued their actions at home with sweeping homes at 14:00 until 15:00. There are 15 people detained by police in Mimika Police. "Said Benny Pakage. 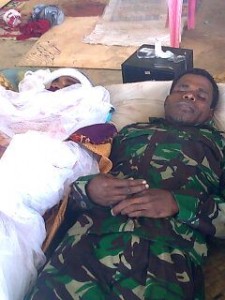 Two civilians who died, to wit, Abner Malagawak (22), and Thomias Blesia (22), while three people were shot and critically wounded, namely, Herman Lokden (19), contact with a gunshot wound in the right leg, Andreas Kapissa ( 23), was shot in the leg, and a housewife, Salomina Kalaibin (33), who was shot in the left arm, abdomen, and translucent dipaha left.

Three civilians were shot by the police is still critical, and is currently undergoing intensive treatment at the General Hospital (Hospital) Sorong, under tight guard by security forces.

Thomas Daimboa (42), Chairman of the local neighborhood, which is also located at the crime scene (TKP), suarapapua.com when contacted, confirmed the attack with a combined shootings TNI / police.

"Events would take place at 10 pm, we were gathered to talk to May 1. Apparatus appears to have kissed the pertemuaan agenda. Officers come from the east and west by the official car and a private car.

Because it does not accept, some people then destroy the car, and the same time, from opposite directions, officers opened fire, and disperse the mob action was at the scene.

Until now, the situation in the District Aimas, Sorong, West Papua, still tense. Some residents also continued to attend the funeral home to see the bodies of two civilians who were lying motionless.