Another casualty of 1 May shootings

Another casualty of 1 May shootings 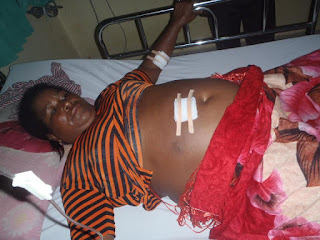 A google translate of article in Jubi. Be-aware google translate can be a bit erratic.
Original bahasa at
http://tabloidjubi.com/2013/05/07/insiden-penembakan-di-sorong-telan-satu-korban-jiwa-lagi/

Two bodies of victims shot at the security forces Soong, April 30. (Suarapapua.com)
Jayapura, 06/05 (Jubi) - The shooting incident against the Sorong in Aimas District on 30 April 2013 and, today more casualties. Salomina Kalaibin, a 42-year-old mother this evening (Monday, 6/5) died after surgery on May 3 because of a bullet lodged in his stomach.

Salomina Kalaibin, according to an NGO activist in Sorong named Fredi, died in hospital Bessu Sele, Sorong at 22.00 CET.
"Mother May 3rd surgery because the bullet that lodged in his stomach and also on his right hand. But before she died around 20:00 CET. "Said Fredi told Jubi, Monday (6/5) evening.

According Fredi, the bullet in the abdomen Salomina bullet allegedly fired by the security forces during incidents between security forces and the citizens of District Aimas April 30. Salomina mother, who was one of three people who were wounded by the gunfire, was treated at the hospital first, before doctors performed surgery to remove the bullet that lodged in his stomach.

As reported earlier, on 30 April, shooting incidents by security forces in the district Aimas, Sorong. The security forces claimed the shooting in self-defense because the hundreds of people who are preparing for a rally on May 1, attack using a sharp weapon and attacked members of the patrol car and burn Wakapolres Aimas. But that would lead to two shots Sorong citizens, namely Abner Malagawak (22 years) and Thomas Blesia (28 years old) was killed while in the post action. Not only that, three other residents who are in the post, suffered injuries from being shot. One of them, Salomina Kalaibin.