5) Photo news from Scotland. Benny Wenda speaks to thousands of Scottish people about self-determination and referendum.

A google translate of article in Jubi. Be-aware google translate can be a bit erratic.
Original bahasa link at
http://tabloidjubi.com/2014/09/18/baku-tembak-di-pirime-lanny-jaya-satu-orang-diduga-tewas/

2) Lanny Pirime SHOOT IN RAW JAYA, ALLEGEDLY KILLED ONE PERSON
Author: TH Indrayadi on September 18, 2014 at 00:34:46 WP
Editor: Syam Terrajana
All the work that was published in tabloidjubi either text, images and sound as well as all forms of graphics (other than those coded IST) be copyright tabloidjubi.com

Jayapura, 17/9 (Jubi) - Armed clashes in the district go back over Lanny Jaya, this time going in Pirime Airport, about 30 people between the military police and an armed group calling itself the Free Papua Movement (OPM), a person injured as a result of gunshot the incident.

XVII Cenderawasih military commander, Major Gen. Christian Zebua said it did not go after, but shut out of the access road to Pirime OPM.
"Presumably this OPM group who did the shooting of two police officers in Lanny Jaya a few months ago," said the military commander to a number of journalists through the cell, Wednesday (17/9).

Added to the Commander, firefight in Lanny Jaya continues to occur throughout the year. The government and security forces have been trying to reduce conflict in the area. There are allegations that OPM conduct crossfire coming from Puncak Jaya.

Meanwhile, the Head of Information Military Command XVII of Paradise, Lt. Col. Arh Rikas Hidayatullah OPM confirmed one person was killed and another seriously injured in a gunbattle that occurred around 12:30 CDT this afternoon.
"Suspected OPM leaders who do the fighting led by Wenda Okiman Puron. In the crossfire obtained evidence of the fruit shoots a revolver. Lanny Jaya conducive situation, "he said.

Previously, Regent Lanny Jaya, Befa Jigibalom said of the barrage firefight in the district in pimpinnya it, there are about 30 security personnel were killed on the spot. Lanny Jaya OPM in the area often ask for money to the local government.
"I never give them (OPM) money around USD 20-30 million. Yet they continue to ask for the money back with increasing magnitude. I no longer give, for fear the money to buy weapons or ammunition and the bullets could have come back to me or to the local community, "said Regent some time ago. (Jubi / Indrayadi TH) 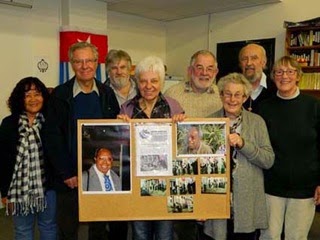 The group of supporters paying tribute to West Papuan leader Dr John Ondawame at Auckland’s Peace Place. Image: APHRC
Pacific Scoop:Obituary – By the PMC news desk
West Papuan campaigners, supporters and students gathered in Auckland for a memorial ceremony for the Vanuatu-based exile John Ondawame who died recently in Port Vila.
The supporters paid tribute to the late Dr Ondawame who visited New Zealand several times and was known to many personally.
They praised his years as a persecuted “freedom fighter” and for his tireless efforts to bring peace and self-determination for the future of his Papuan people.
In a statement from the Asia-Pacific Human Rights Coalition (APHRC) to Pacific Scoop, the group said:

Dr John Otto Ondawame, from the Amungme tribe in Mimika regency in Indonesia’s Papua province, was the vice-chairman of the West Papua National Coalition for Liberation (WPNCL).
John was persecuted by the Indonesian military and forced to spend about half his life in exile in Sweden where he was granted asylum in 1979; Australia where he finished his doctorate; and finally in Vanuatu, where he died. Until his death, he campaigned for a free West Papua and believed that one day his country would be free to raise the Morning Star flag without being jailed for 15 years.
John has been well known to many of us in Aotearoa/New Zealand over many years. Joan Macdonald, co-chair of Asia Pacific Human Rights Coalition (APHRC),  first met him when he was living in Sweden, accompanied by a group of Swedish women who visited Aotearoa when doing a World March for Peace in 1986.
Subsequently he visited Aotearoa a number of times on speaking tours and also to attend Solidarity meetings for West Papua in 2003 and to attend two Auckland-based Pacific Island Forum meetings, the most recent in 2011, where he was a key lobbyist for a free West Papua.
He had been forced to live in exile from his country since his arrest and detention in Papua New Guinea in 1978, as a freedom fighter. Joan visited John Ondawame and Dolly, his first wife. When they were living there they struggled with very few resources.
Dolly has had a long association with the Women’s International League for Peace and Freedom (WILPF) and has been a speaker at several of WILPF’s international meetings. Judith Crimmins managed to contact Dolly in Papua New Guinea to convey our condolences. She is doing fine.
For the last few years John, had worked from a base in Vanuatu with some support from the Vanuatu government. For over 50 years, West Papua had been trying to be recognised as part of the Melanesian Spearhead Group (MSG) and finally this year John helped make it happen – a great legacy to the Free West Papua campaign.
John had worked unsparingly and for many years for his people and his country, West Papua. APHRC mourns the loss of a strong West Papuan freedom fighter and a friend.
He was in his 60s and is survived by his wife Leisani and son Jacob.
APHRC extends sympathy to his family and to his people.
------------------------------------------------------------------------------------------

By Banjir Ambarita on 10:57 pm Sep 17, 2014
Category Crime, Featured, News
Tags: Papua PoliceJayapura. A senior police officer in Papua province has been fired over a personal indiscretion and another for his alleged involvement in a gambling racket, while a third has been linked to a knife attack on a lawyer for a prominent activist.
First Insp. Angga, the chief of detectives at the Jayapura Police, was fired after being caught in bed with the wife of one of his subordinates, Papua Police Chief Insp. Gen. Yotje Mende told the Jakarta Globe on Wednesday.
Yotje said the affair was discovered when the woman’s husband followed her to Angga’s house and burst in on them in bed together.
“He has to be held to account for his conduct,” the police chief said, adding that Angga now faced an ethics tribunal.
Meanwhile, the police chief in the town of Sorong, Adj. Sr. Comr. Harry Goldenhard, has been fired for what Yotje called “a range of offenses, including backing a gambling syndicate” at the city’s Night Market.
Yotje said his office had repeatedly ordered the Sorong Police to crack down on the illegal gambling known to take place at the market, “but it was never done.”
“I finally had to send a team to break up the gambling and shut it down,” he said.
He added that Harry would also be brought before an ethics tribunal, while an investigation was underway into whether other members of the Sorong Police were also in on the gambling racket.
In a more serious case, a lawyer for Areki Wanimbo, a community leader and activist in Papua’s Lanny Jaya district, reported being attacked shortly after taking on the case of the activist’s “wrongful” arrest by Adj. Sr. Comr. Adolf Rudi Beay, the Jayawijaya Police chief.
Latifah Anum Siregar, a lawyer with the Democratic Alliance for Papua, or ALDP, told the Globe that the incident occurred on Tuesday night outside the hotel where he was staying. He said two men on a motorcycle approached him as he walked back to the hotel carrying a briefcase containing legal documents that he and Areki had prepared for a planned lawsuit against Adolf.
He said one of the men lunged at him with a knife and grabbed the briefcase. Anum sustained a cut to the arm, while the assailant and his accomplice got away with the briefcase.
Areki was arrested on Aug. 6 in connection with the arrests of French journalists Thomas Dandois and Valentine Bourrat for alleged immigration violations.
The pair were reportedly making a documentary on the separatist movement in Papua, and police initially accused Areki of aiding them.
Anum said that although his client had been released, he still faced “arbitrary charges.” He said Areki was suing Adolf for wrongful arrest and violating his civil rights by not producing a warrant for his arrest within 24 hours of arresting him.
Asked about the accusations against Adolf and the attack on the lawyer, Yotje said he had not received any reports about the matter.
The Globe’s contributor in Jayapura, Banjir Ambarita, was similarly stabbed by unknown assailants in March 2011, shortly after reporting on the sexual abuse of a female detainee by police officers at the Jayapura Police’s detention center. No arrests have been made in the case. 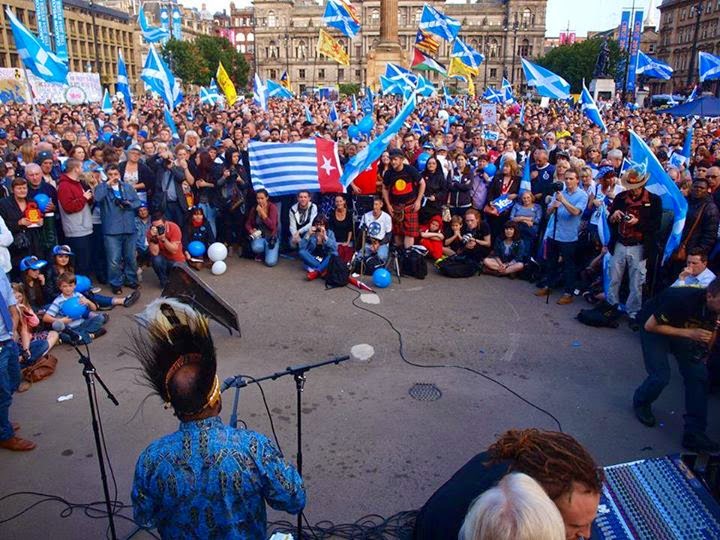 5) Photo news from Scotland. Benny Wenda speaks to thousands of Scottish people about self-determination and referendum.
Benny has been invited to Scotland by Politicians and the Scottish people to witness and observe how a peaceful and dignified referendum to international standards is arranged and held.The West Papuan people have been illegally denied their right to self determination to international standards by the Indonesian government. Benny Wenda has spent his life peacefully campaigning for West Papuan people to have their right of self determination. To have a referendum so that they can freely choose their own future.

Benny will be in Scotland until Friday to observe and witness the different aspects of the referendum. He will be available for journalists comment and interviews.
Press contact, 07883202154
Posted by AWPA Sydney News at 2:12 PM