The Secretary-General of the West Papua National Coalition for Liberation says the West Papuan cause has lost a good leader, following the death of Dr John Otto Ondawame.
Rex Rumakiek says Dr Ondawame, who died in Port Vila Thursday night following a reported heart attack, was the figurehead for the Coalition as it elevated the West Papuan bid to join the Melanesian Spearhead Group to its current level.
Mr Rumakiek says that being an educated fellow and having long been involved in major campaigns pushing for a peaceful solution to the West Papua issue, Dr Ondawame's legacy is substantial.
"He became sort of symbolic because despite (his people) being rich in mineral resources in this country, he was one of the poorest of all the campaigners. He was an ex-freedom fighter in the bush, as so many of us did, but especially him because he was arrested. He never planned to leave the country but he was arrested in Papua New Guinea and put in jail."
Rex Rumakiek.

All the work that was published in tabloidjubi either text, images and sound as well as all forms of graphics (other than those coded IST) be copyright tabloidjubi.com 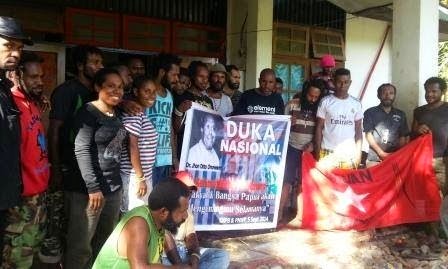 Jayapura, 6/9 (Jubi) - Governing Body Center West Papua National Committee (KNPB-BPP) called for Papuans from Sorong to Merauke to hold a three-day national mourning for the lost figures of the Free Papua Organization (OPM) host. Dr. John Otto Ondawame, in Port Villa, Vanuatu. "KNPB center officially opened the event at the central secretariat of national mourning," said the general secretary of KNPB Center, Suhuniap Ones, to tabloidjubi.com through a release on Friday (5/9). Venturing into the national grief, KNPB Center, KNPB Numbay region, Sentani region and West Papua National Parliament (PNWP) and all members holding KNPB Opening Worship. "Worship the opening brief funeral on Friday 5 September 2014, at 13:20 WPB. Worship led by Deputy National Parliament Mr. Anim Ha region. Eliaser Anggaingkum, "he said. Chairman of KNPB, Victor F. Yeimo, expressed deep condolences and expressed respect to the deceased as Papua diplomat who has the title of Doctor. John Otto Ondawame OPM Office Opens in Vanuatu, for the first time with Andi Ayaimseba. According to Victor, Ondawame entrusted as Vice Chairman of the West Papua National Coalition for Liberation (WPNCL) in Vanuatu since 2007. "He worked hard fought till this day he meniggal degan world. We, the people of West Papua has lost a true warrior, "he said. But as he thought, that loss should not deter the struggle of the people of Papua's fight for independence but should be inspiring flames. "KNPB must continue the struggle". According to information, Dr. John Otto Ondawame died in Vanuatu, 4 September 2014, at 08.00 Vanuatu time, due to heart attack. Top events this grief, KNPB called national grief and convey farewell. "Goodbye my hero, the true revolutionary, the people and the nation of Papua will remember you forever in the history of the struggle. Greetings uprising !!! "said Victor. (Jubi / Mawel)

‘Test of Our History’: President Susilo Bambang Yudhoyono promised to solve murder of prominent human rights activist, but its masterminds remain at large as his administration comes to an end
http://www.thejakartaglobe.com/news/decade-munirs-assassination-questions-still-linger/