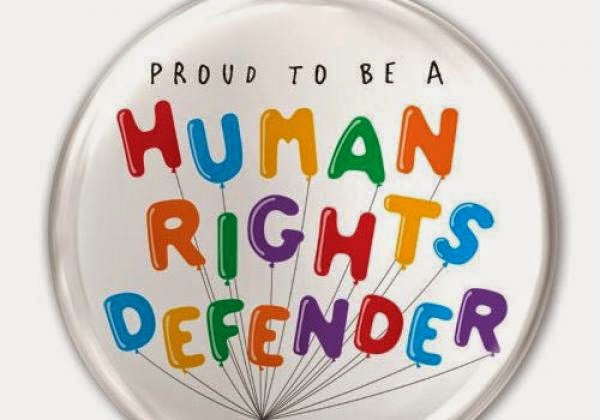 Human rights defenders in Papua should be protected (Photo: Ist)

"We deplore the attitude of the police force in handling cases related to human rights defenders," said Elias Petege, activists breath, in a press release sent to the editor suarapapua.com, Sunday (09/21/2014) afternoon.
According Petege, in the last two weeks, a number of NGOs in Jakarta had received information related to criminalize attempts by the police to Gustaf Kawer, and acts of violence committed by Strangers (OTK) to Anum Siregar.
"Both lawyer and human rights activist who has been defending the oppressed people of Papua," said Petege.
In recent years, further Petege, Papua is covered from the monitoring of the international community, including the democratic space continuously silenced.
"It was obviously difficult for the activities of human rights defenders in doing his job well in Papua. In fact, politically, there are no special security status given to the government of Papua, like martial law or the like. "
"So law enforcement actions against excessive civil society are things that can not be tolerated," he said.
Furthermore, said Petege, two cases involving human rights workers in Papua latter adds a long list of evidence that Papua treated differently under warranty against democratic rights.
Gustaf Kawer related cases, Hariz Azhar, coordinator KontraS said, law enforcement officials need to carefully read the Law No. 18 year 2003 on Advocates, in particular Articles 14, 15 and 16.
"Actions taken by Br. Gustaf as described in these rules and as it has been presented by Br. Gustaf himself, still within the limits of defending the interests of the client, which is where the action can not be prosecuted both civil and criminal, "said Hariz.
KontraS, Breath, AMP, and KP-FMK in a press release demanding, first, the Indonesian government asked to provide guarantees and protection for human rights defenders in Papua in carrying out its work, as has been recommended in the Universal Periodic Review in 2012, and provide assurance of a safe environment to support the work of human rights defenders, including guarantees to conduct an independent investigation and not partial of violence against human rights defenders and ensure the legal process.
Secondly, Papua Police to stop the criminalization of Gustaf Kawer, given that the action taken by Gustaf still within the confines of the defense of the interests of the client as stipulated in Law Advocates.
Third, Jayawijaya to immediately follow the information that was submitted by fellow victims, and do an investigation to determine the motive of the violent acts committed against Anum Siregar, it is important to ensure legal certainty for victims fairly, and ensure there is no conflict of interest parties police in investigating this case, the position of Ms.. Anum Siregar, who was the police chief file for a pretrial Jayawijaya
Fourth, Papua Police should ensure the guarantee of security protection against human rights defenders in Papua to the fullest, because of work - work is guaranteed in a number of legal instruments, and work - the work as part of an effort to encourage the rule of law and human rights in Papua.
Oktovianus POGAU
-----------------------------------------------------------------------------------------------------
A google translate of article in bintangpapua.com. Be-aware google translate can be a bit erratic.
Original bahasa link at

That sentence farewell military commander (Military Commander) XVII / Cenderawasih Major General Christian Zebua in face to face with members of the press in corridor Makodam XVII / Cenderawasih, Bukit Polimak IV, City of Jayapura, Papua province.
Yes, the gathering momentum of Paradise are used the military commander in charge of the province of Papua, and West Papua, to say goodbye, because as of 26 September 2014 will run a new task as a Special Staff of the Army Chief of Staff.
For a two-star general from the island of Nias, North Sumatra, was, during his leadership of Papua there are ups and downs in the task, particularly the task of securing the sovereignty of the Republic of Indonesia in the area immediately adjacent to the country of Papua New Guinea (PNG).

Not to forget, he recounted how seven soldiers were slaughtered by a group of armed OPM ridiculous, because the soldiers were actually deceived by a public figure.
"Starting from the information society to a figure that there are soldiers in a location of weapons and weapons that could be taken, but to reach the location it should not be uniformed military and without weapons. It turns out that the soldiers were slaughtered in the middle of the road, even his body cut into pieces, "said Christian.
After the incident, he continued, the soldiers angry and want to kill these people, but I tried to calm them.

"Do it this way, because our soldiers were violated procedures in the field of duty," he said.
Major Christian admitted carelessness of his men was still burned into his memory, so he seeks to implement the best strategies in handling security issues in accordance military duties.

He mentions three strategic implementation, ie grab the hearts and minds of the people, seized weapons and disable Civil Armed Movement (GSB), and wake constructive opinion for the betterment of the nation and the state.
"All three of these strategies, I think it is very effective, in which every step soldiers have the support of every element of society," he said.

Concrete evidence of the effectiveness of the three strategies during the first semester / 2014, Cenderawasih GSB many firearms seized by contact firing and also the delivery of 55 units of firearms and ammunition as well as several documents 1,522 OPM.

"Two days ago (17 September 2014) in Lanny Jaya, joint military-police team get a revolver type guns firing after contact. On the same day, in Arso 14 Keerom, Battalion Task Force 623 / BWU also took delivery of two firearms and gun type of Mouser Baretta, "he said.
Christian also revealed that Cenderawasih very concerned about the quality of law enforcement and respect for human rights, including through an increased understanding of the law, discipline, and order, as well as socialization and counseling every execution of tasks in the field.

Coordination with police to equate border security measures are also ongoing.
"Me and Mr. Chief many times to discuss the associated movements of armed civilians, and we agreed to crack down on people who carry guns. We do not want ordinary people become victims, "he said.
That means, said Major General Christian, OPM members were given the opportunity to continue throughout his life rights do not carry weapons and do not disturb the people, especially the security forces.

"They (OPM) also have a right to live, but do not disturb the people and soldiers. If someone said, already know the location and strength of their (OPM) why is not resolved, then I say, we had a weapon that could be completely eradicated, but they are no match for me, "he said.

The task of law enforcement law enforcement in the Homeland is the realm of the military police unit assisted under the control of the Papua Police Chief Insp Yotje Mende.
Kamtibmas related conditions in the central highlands of Papua, Inspector General of Police Yotje Mende admitted repressive measures must be taken, given the intelligence report said the armed civilian groups (BCC) version of the police or armed civilian movement (GSB) military version, the action is often accompanied by increased support weapons.

"It's getting held law enforcement operations against BCC in Lanny Jaya involving the military," said Inspector General Yotje.
He said law enforcement operation was carried out to arrest members of armed groups who have been disrupting and disturbing residents.
Even armed group also attacked security forces either police or TNI.
"Therefore, we continue to pursue and arrest members of the armed group that, if they use a gun, yes we annihilated," he said.
Papua police chief since August 2014 it admitted it had received approval from the Regents Lanny Jaya because of the actions taken have been very disturbing armed groups and residents feared could hinder development.

However, in the implementation of operations in the field of law enforcement is not done blindly but persuasively.
"We still provide an opportunity for people to get out of the group and join with other relatives, as if still join the armed groups, the security forces will not be tolerated," he said.
Inspector Yotje claimed security forces had secured the location that had previously been the basis of armed groups operating in the District Lanny Jaya, including the so-called "blue tent" in Balingga.

"Hopefully, the group is estimated to have about 20 guns that shoot soon be captured so that no longer exists disruption to the public and the security forces," he said.
Armed groups operating around Lanny Jaya regency, among others Puron Wenda and Enden, even Rambo who previously operated in Puncak Jaya reportedly been joined to the group Puron Wenda.

"From the reports we received, Rambo who is the son of Puron Wenda has joined the armed groups in Pirime," said Yotje.
Now, followers of a paramilitary group was estimated to be about 50 people, with the support of about 19 shoots weapons of various types.
In fact, Arsenal firearms looted in 2012 from members of Brimob while on duty in Puncak Jaya, has been brought to Pirime. However, it had asked the public to immediately broke away from the group.

"If you stay around armed groups that then they will receive as a result when members of law enforcement, it is not indiscriminate," said Yotje who was accompanied by Deputy Police Chief Brig Gen Paul Waterpauw.
Gradually, he said, the locations of which became the headquarters of the armed groups, including "blue tent" that was around Balingga, will be combed.
"We will gradually master the location of the headquarters of the armed civilian groups," said Yotje is also accompanied by the Head of Papua Police spokesman Sr. Comr Pudjo.

Now, about 530 police and military personnel deployed to the region Lanny Jaya. The armed civilian groups since last July and fired disturb citizens and security forces.
As a result, only the military and police bullets to quell KSB / GSB are often impair quality of life of Indonesian citizens in Papua, as long as they carry a firearm. (ant / don / L03)
Posted by AWPA Sydney News at 2:02 PM