1) NZ rally calls for release of journos in West Papua

1) NZ rally calls for release of journos in West Papua

Updated about 1 hour ago

A rally was held today outside New Zealand's parliament to call for media freedom in West Papua and the release of two French journalists detained in Indonesia's remote eastern region.
Valentine Bourrat and Thomas Dandois were arrested on the 6th of August in Wamena, and remain detained in Jayapura by Indonesian police, accused of violating their visas.
Police have indicated the pair could face a prison sentence for subversion amid allegations they were involved with pro-independence activists.
However there have been ongoing calls by international rights and media groups for Indonesia to release the pair. 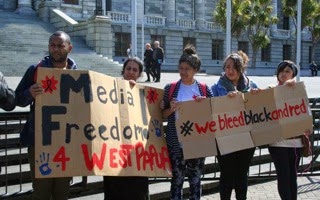 One of the speaker's at today's rally in Wellington, Pacific Studies academic Dr Teresia Teaiwa, says it's imperative that journalists be allowed in to report on the situation in Papua region.
"For today, we're concerned about the two French journalists and the one West Papuan (who was arrested after allegedly meeting with them) whose own freedom, not just the freedom to report, but their freedom, has been curtailed."
Dr Teresia Teaiwa 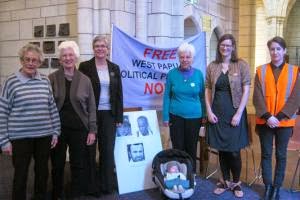 The vigil today in Auckland for West Papuan leader Areki Wanimbo
and French journalists Valentine Bourrat and Thomas Dandois.
Image: PMW
Tuesday, September 23, 2014
Item: 8988
AUCKLAND (Pacific Media Watch): The New Zealand government and the French Embassy in Wellington were today called on at a vigil to put pressure on Indonesia to free two French journalists and their sources imprisoned in West Papua.
The vigil, organised by West Papua Action Auckland, said that journalists Thomas Dandois and Valentine Bourrat and a West Papuan human rights defender who was jailed after granting them an interview, Areki Wanimbo, were being subjected to "incredibly draconian" threats of a trial.
Dandois and Bourrat were jailed seven weeks ago by Indonesian authorities for allegedly breaching their tourist visas through reporting on human rights abuses in West Papua.
Maire Leadbeater of West Papua Action Auckland said the only way journalists could get stories out of West Papua was by bending the rules.
Leadbeater spoke out against the "intense interrogation" that West Papuan activists who met with Dandois and Bourrat had been subjected to by the Indonesian military.
The organisation was very grateful to the journalists and their sources for putting themselves at risk in order to get information out into the world, she said.
Activist Margaret Taylor spoke out against an attack this week on Anum Siregar, the lawyer representing Wanimbo.

"It does seem at the moment that there is an increase in attacks," she said.
Anita Rosentreter of the Engineering, Printing and Manufacturing Union (EPMU), which organises journalists, said her union had formed a New Zealand media freedom network which would take up the cause of the journalists and Wanimbo.
New Zealand journalist members of the network believed that any one of them could end up in the same situation if they went to West Papua, Rosentreter said.
Sydney-based journalists would also be holding a vigil today and in Wellington, New Zealand, Green Party MP Catherine Delahunty was set to hold a solidarity meeting for the journalists and their sources on the steps of Parliament.
Meanwhile, Al Jazeera reports that Dandois and Bourrat have been detained in West Papua longer than any other foreign journalists previously.

"None since Oswald Iten of the Swiss daily Neue Zurcher Zeitung, who was jailed for 12 days in Jayapura in 2000, have been detained for anywhere near as long," the news site reported today.

TEMPO.CO, Jakarta - Investigation team from the Energy and Mineral Resources Ministry is still investigating the collapse of underground mining owned by PT Freeport Indonesia. The temporary allegation is that the collapse of rocks in West Muck Bay mining was caused by an error in standard operating procedures (SOP).
“Our allegation is that the company didn’t follow the SOP, but it’s still just an assumption,” said mineral and coal director general R. Sukhyar on Tuesday.
According to Sukhyar, the allegation is from the government and it will still be validated by the investigation team. “What is clear is that the incident occurred in Freeport’s development area, not in producing area,” he said.
On Friday, September 12, at 23:30 Eastern Indonesian Time, a ground failure occurred at West Muck Bay, Grassberg Block Cave’s underground mining area. The incident, which caused rocks to fall down, killed Boby Hermawan, mining operator.
Some parts of jumbo drill at the location was also buried by the falling materials. Brad Skinner, who operated the jumbo drill, was successfully rescued from the ruins.
Regarding the incident, PT Freeport Indonesia president director Rozik B. Sutjipto said that he had reported it to the Energy and Mineral Resources Ministry. “The ministry will follow up our report,” he said.
AYU PRIMA SANDI

Jakarta (ANTARA News) - The Papua province has offered to promote Ugimba Village in Intan Jaya District and Carstensz Pyramid as tourist destinations in a bid to empower the local communities.

Indonesian Minister of Tourism and Creative Economy Mari Elka Pangestu launched the two tourist sites in Jakarta on Tuesday as the leading tourism destinations in the province.

"These leading destinations were expected to empower the communities around the tourist attractions that play an important role in the implementation of the sustainable tourism program," the minister affirmed.

According to Pangestu, the establishment of the two destinations was part of the ministrys program to increase the contribution of tourism to boost social welfare, particularly for those living in the villages.

"The establishment of Ugimba Village as a tourism destination will play a key role in empowering the communities and conserving the Carstensz Pyramid, which is well-known as the only area in the tropical region to be covered in snow throughout the year," she stated.

Regent of Intan Jaya Natalis Taboni, who was also present during the launch event, noted that the common climbing track of Carstensz, which comprises the Sugapa-Ugimba-Carstensz route, allows the climbers to visit Ugimba before they commence to conquer the peak.

It is expected that it will encourage the development of facilities for the Ugimba residents, he stated.

"All this time, Ugimba residents have helped tourists from all over the world such as the United States, Russia, and Germany to climb the Carstensz Mountain," he remarked.

He promised to encourage the development of Ugimba as a tourist destination.

The establishment of Ugimba Village as a tourist site was initiated by the local residents with the contribution of the Somatua Foundation, which submitted the demand to the government.

Ugimba offers spectacular views of its surroundings such as the Kemabu River, Nabu River, and several endemic species of animals and plants such as Dingisco and local orchids.(*)
Posted by AWPA Sydney News at 3:40 AM